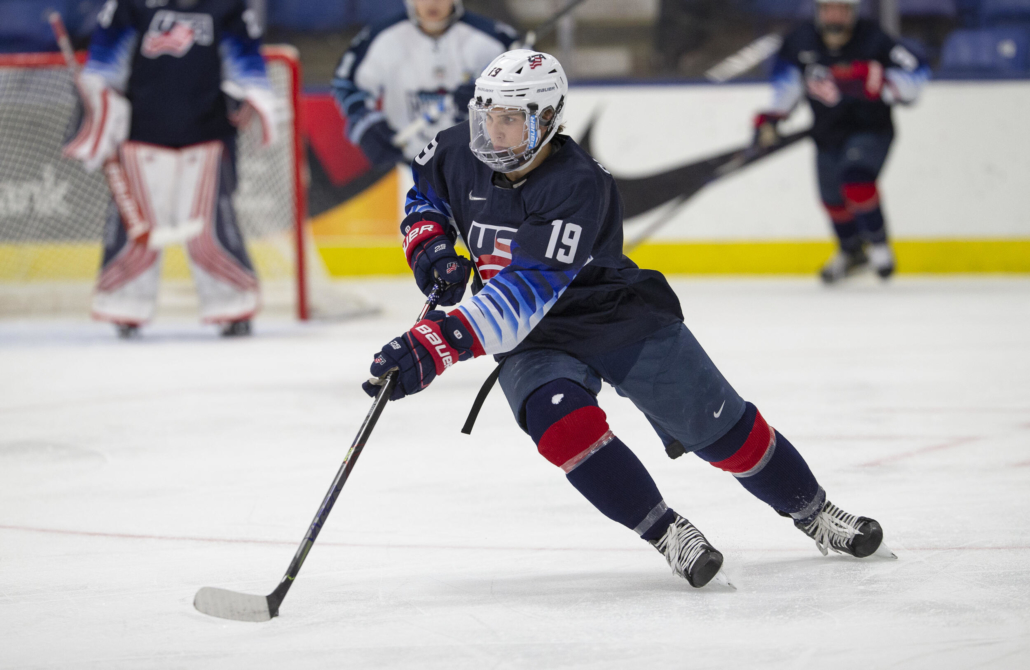 A rugged two-way forward who added a physical component to the NTDP’s top line, Slaggert had a strong second half in which he reinforced his reputation as being more than just a crash-and-bang support player. Not only did he contribute in his own end on a consistent basis, but his 13 tallies ranked fifth while operating in a goal-scoring-by-committee attack. Slaggert, who can play center or wing, also proved his mettle against tough NCAA opposition as well, scoring seven points (3 goals, 4 assists) in his final seven games against college competition. The most impressive aspect of his season, however, was his production against his USHL peers — Slaggert registered a point-per-game average (14 points in 14 games) against the 21-and-under crowd.

Slaggert is a good skater with deceptive speed but owns a powerful stride and has excellent balance. He is an threat in open ice and can stickhandle around traffic and into the high slot, although he is more effective when using the chip and chase. Part of this is playing with an excellent stickhandler like center Thomas Bordeleau, but Slaggert usually times his dump-ins with his rate of speed to apply instant pressure on the retrieving defender. He’ll throw his weight around on the forecheck and quickly react to reverses or stretch passes. Slaggert creates a lot of problems in the neutral zone and is consistent with his starts and stops.

Slaggert is your prototypical college-bound North American forward. He mixes physicality and aggressiveness with speed and the ability to finish in several ways. Flanking a top playmaker like Bordeleau didn’t hurt, but Slaggert is incredibly low maintenance and proved time and again he can drive possession with smart decisions, puck protection, and proper positioning off the cycle. He has a soft touch and good vision to connect with linemates across the seam, but on occasion he will pull off highlight-reel setups from near the goal or off the rush. Slaggert is both aggressive and tough around the net. He will establish net-front superiority and will battle hard to keep it that way. He can deliver one-touch or no-look passes, and also execute set plays with timing and precision. Where he makes most of his money, however, is in the low slot for tip-ins or rebounds, but Slaggert also has a quick wrister that he can label in one motion off the pass.

On the penalty kill, Slaggert will pressure the points with decisiveness and keep his stick in the way of passing lanes. He’s also a threat to score while shorthanded. During even-strength play, Slaggert maintains constant movement and is quick to the puck when it rapidly changes direction. Time and again, Slaggert will put his head down and bust it on the backcheck but also have the wherewithal to keep his motor running while applying physical pressure to opposing point men.