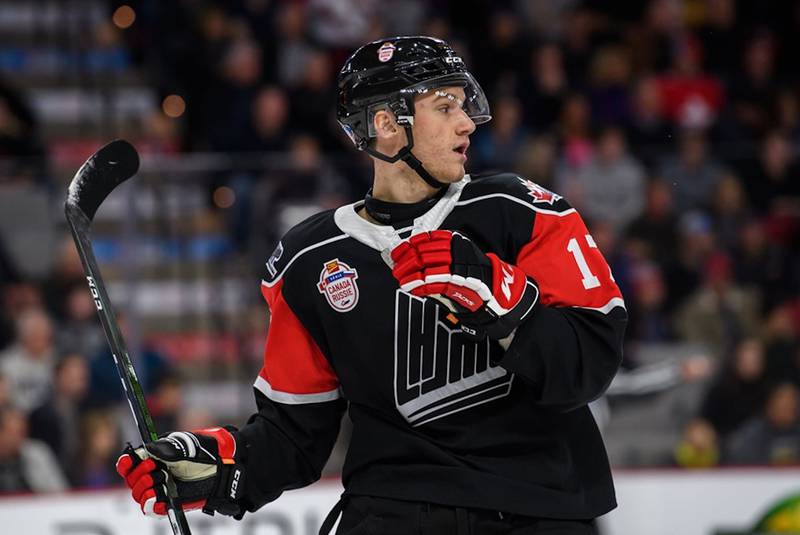 An 18-year-old force who can look like a flashy 10-year veteran in one instance and a smothering checker the next ? Sign me up. Mercer’s strong draft season may have ended a bit prematurely in late February after a serious wrist injury, but his averaged-out draft stock should continue to hold firm somewhere within the middle of the first round. Unfortunate as the injury was, the truth is that Mercer’s overall body of work in his draft year from start to finish was borderline impeccable. Hockey Canada doesn’t nominate first-year eligibles for both the Super Series and the world juniors unless you know how to play and think at the same time, which is Mercer’s game to a tee.

Although he plays center and wing (and looks like a natural at both), I don’t see any major flaws in Mercer’s game. He is always around the puck. And when he’s not, Mercer’s always in the right place to wait for it. Mercer acts and reacts to support the idea that his focus is consistently clear — You just don’t end up on the receiving end of that many Grade A chances simply because you’re lucky or have a great linemate. His positioning and anticipation lead to a lot of blocked clearing attempts, and Mercer’s blade being a rubber magnet along with ridiculous skate-to-stick transition and hand-eye coordination lead to a lot of friendly break-ins and odd-man rushes.

Mercer is an accurate passer and can make tape-to-tape passes in one motion. He owns soft hands and is a confident passer; not only for his body language and stick work but also for the areas he tries to feed pucks through. Mercer does not look for the easy way out and will gladly defer to his elite shot if a passing lane is clogged. This situation likely causes many problems for opposing QMJHL tacticians since Mercer’s as dangerous a shooter as he is a playmaker. He owns a quick first step that he takes with decisiveness, so expect time and space for him once he’s heading north. Mercer owns a wide but quick stride that helps him finish first in most of his footraces. He also is tough to knock off the puck and he can be shifty and elusive in tight spaces, especially behind or near the net.

The defensive component to Mercer’s game is quite effective. He not only kills penalties with a strong desire to counterattack, but Mercer also patrols the neutral zone and picks off a lot of passes. His body and stick react to the puck’s every move, which help him get in the way of d-to-d or seam passes