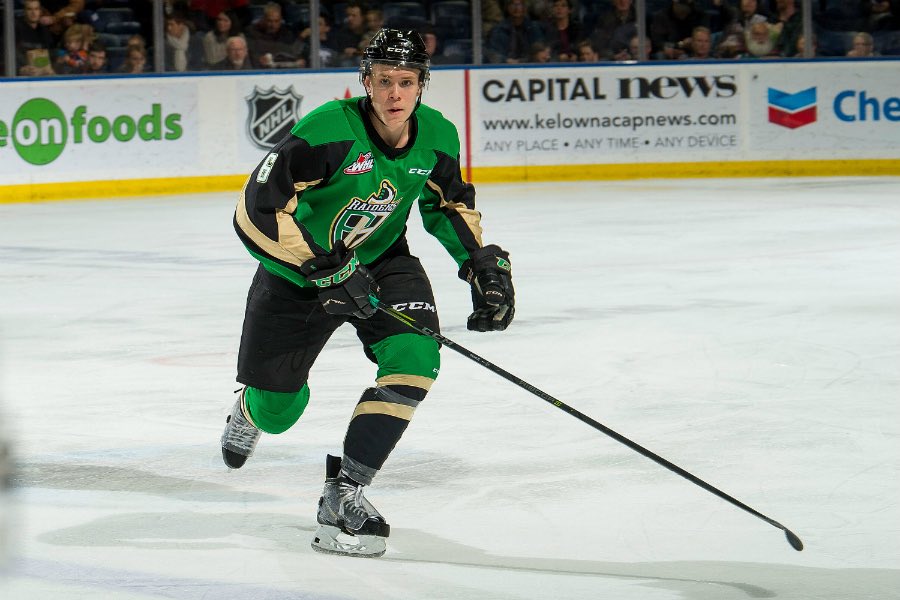 A minute-eating, two-way defenseman who has been a critical piece to Prince Albert’s success, Guhle pieced together an impressive draft season in which he showcased his offensive abilities in addition to his defensive-zone prowess. He’s got length, mobility, smarts, and aggressiveness, and Guhle was quite consistent in piecing all of them together while performing in all situations for the Raiders. He established career marks in goals (11) and assists (29), and was a fixture on the power play and penalty kill.

There are several noteworthy aspects of Guhle’s game, but his skating has to be at or very close to the forefront. He’s definitely more successful creating time and space by moving east to west rather than north to south, but Guhle has excellent multi-directional mobility with or without the puck. Guhle’s pivoting from backwards to forward appears effortless and he rarely is caught flat footed when challenged by a roadrunner attacking him at top speed. He presents a wide base with clean stride, and there are times when he can look quite graceful, especially when you consider how big he is. Guhle can use his speed to go end to end, albeit under optimal conditions, but Guhle’s breakouts generally consist of short-distance evasive tactics followed by crisp breakout passes prior to hitting the red line.

Offensively, Guhle generates most of his opportunities and set-ups via his hard, accurate shot. He doesn’t seem to favor either the wrist shot or the slapper, as both appear equally as effective at zipping through shooting lanes and creating rebounds or second chances. Guhle can generate a significant amount of power behind his shot without much backswing and his release for a defensemen is very quick. The vast majority of his goals came from shots above or near the circles. His passing, on the other hand, is very meat and potatoes, although he goes tape to tape from his forehand or backhand, especially when going D-to-D. Any lack of flair or pizzazz is balanced out with his soft hands and the poise to complete clean passes under intense pressure.

Guhle’s impact on defense covers many areas. His one-on-one play — gap control, footspeed, stick positioning, timing — is excellent, and he can finish off an opponent with a thunderous check that creates a change in possession. Other times, Guhle will fix them into the corner and contain them while using harassing stick checks until forward help arrives. The decision making process behind Guhle’s slot coverage delivers sound courses of action that result in the elimination of threats near his own goal. Keeping his feet moving, defending the low slot with force, and wielding an stick active on the penalty kill are two reasons why he’s a key cog to Prince Albert’s special teams, which have ranked near the top of the WHL in each of his two full seasons.