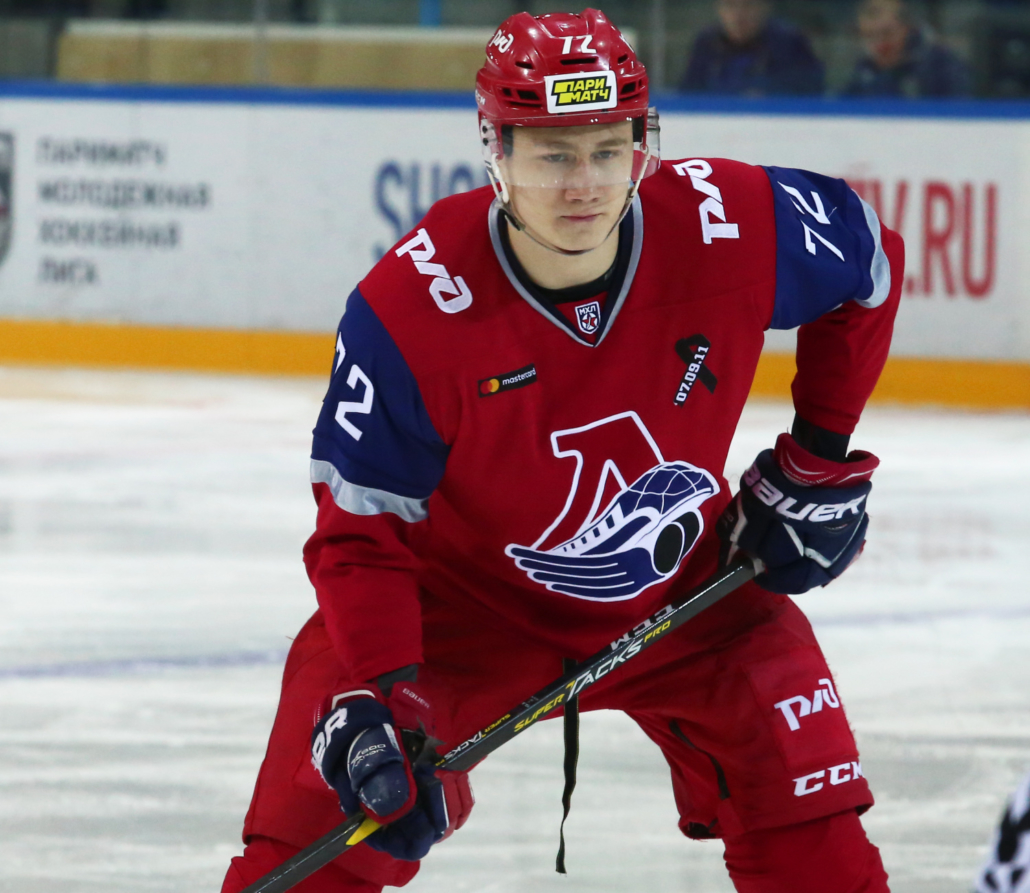 With a large frame and advanced offensive talents in key areas, Maksim Beryozkin is hard to miss when a Loko game is on. A right-handed shot, he mans his off wing on the left side of the top line alongside Oilers’ center prospect Maksim Denezhkin and undrafted right wing Yegor Manin.  Beryozkin is used in all even-strength situations and sees additional ice time on the lead penalty-killing unit and the point or bumper on the power play. Statistically speaking, the numbers from his second full MHL season are beyond impressive. Beryozkin finished the regular season as the league leader among first-year draft eligibles with 25 goals and his 1.06 points-per-game average was second only to Rodion Amirov. Beryozkin also tied for first in the league with four shorthanded goals.

Beryozkin flashes serious offensive skill, albeit in spurts. His vision is acute and his passes are crisp and accurate. Teammates of any position can count on him to get them the puck without hesitation. Beryozkin’s wrist shot — which he can unleash in the blink of an eye — is equally impressive in terms of both power and accuracy. His high offensive IQ enables him to use either effectively and being a dual threat with ideal size is critical to his role on one of Russia’s premier organizations. Beryozkin shows the ability to slow down and dictate the pace of play while displaying superior puck protection and above-average hands. As a result, Beryozkin’s line is on the business end of multiple high-danger opportunities per game, and he himself can blister shots off the pass or thread the needle through a dense network of sticks and bodies.

Off the puck, Beryozkin displays several positive defensive attributes. He generally does a good job of being in the right place at the right time. He is active in using his stick to clog passing lines, block passes, and disrupt opposing players’ attempts at stickhandling, especially while he’s on the penalty kill. He is also fairly adept at executing a stick-lift while backchecking. Altogether, Beryozkin’s defensive game is somewhat inconsistent, particularly at even strength — he’ll backcheck if he thinks he can make an immediate play but can also be guilty of dogging it a bit if the puck is on the other side of the ice. An occasional lack of hustle in the defensive zone is evident when observing his every move.

Like most thick-framed wingers, Beryozkin’s straight-line speed is an area that is in need of an upgrade. Although he has shown deceptive quickness in tight spaces and is agile cutting towards the middle, his heavy feet and short stride keep his acceleration at a minimum and he often struggles to pull away from back pressure. Beryozkin’s edges are probably the best part of his skating ability, but there is still room for improvement in that area as well. Of course, average to below-average skating is common for bigger players such as Beryozkin, so he’ll need to improve his footspeed is he wants to be an effective NHL player. That being said, a big like Beryozkin at top speed can be an intimidating sight and defenders have shown to back off the line to deal with the violence of his confident zone entries.

Although Beryozkin is not averse to the physical side of the game, he could stand to throw his weight around with more consistency. He does know how to use his body to shield the puck and he has excellent balance during trench battles. But being a physical force at this point is not within his makeup — adding an edge to his play along the boards would be a welcomed dimension. That said, he does get involved after the whistle, especially if one of his teammates was the victim of a cheap shot.

Beryozkin profiles as a complimentary winger at the NHL level who provides special teams value on the condition his skating improves. His game may be better suited for right wing given his exceptional passing ability, although being a right shot on the left side hasn’t hampered his play thus far.

#MHL: LW Maxim Beryozkin (2020/2001 LBD) gets Loko on the board off a faceoff win from Maxim Denezhkin (EDM 7th/2019). He’s had a quiet game otherwise considering he’s on the top line.#2020NHLDraft pic.twitter.com/irXqoXTpOQ