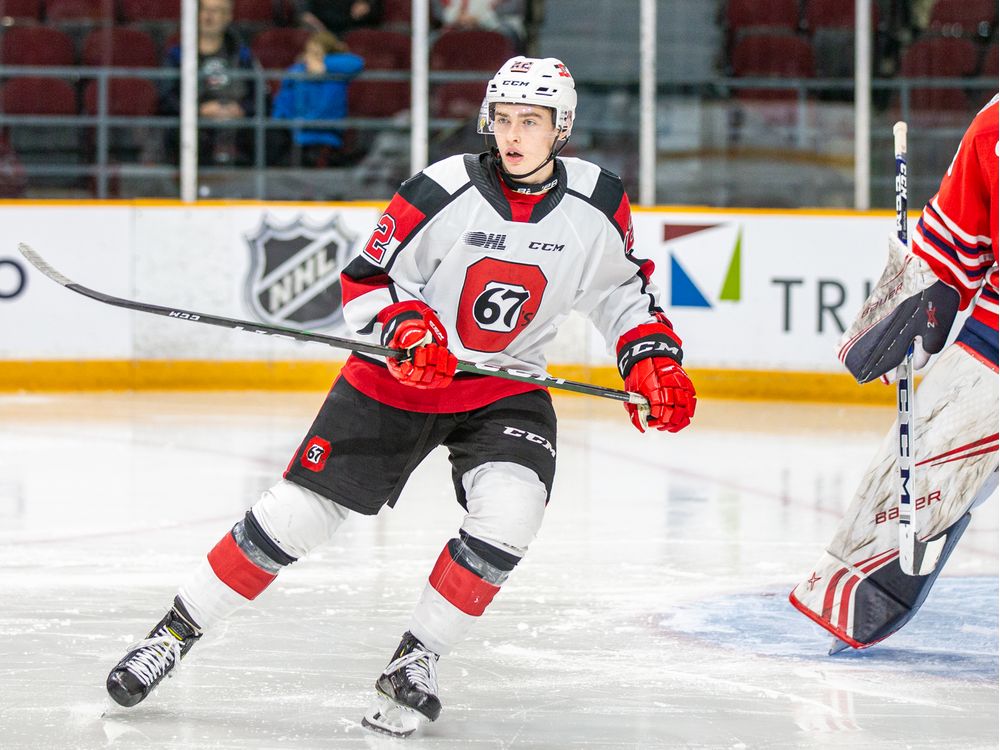 One of the better two-way players among draft-eligible wingers, Jack Quinn is a goal-scoring machine who in his first year of eligibility placed second in the OHL with 52 tallies, including 15 on the power play and another three while shorthanded. Although he had the benefit of sharing the same ice on the power play with a superior playmaking center like Marco Rossi for a good chunk of the season, Quinn distinguished himself as a low-maintenance threat capable of creating his own shot or setting up his linemates for their own prime chances at the net.

The knee-jerk response to Quinn’s rise in draft circles is to tie his production to playing on Rossi’s wing. But Quinn clearly does the work required to get himself into scoring position, and you can’t fault him for making the most of his opportunites. Quinn has the potential to drive his own line as a winger because he’s so good in the corners or along the boards, plus his escapability for an above-average skater is a tribute to his poise and the timing of his lateral cuts immediately after of zone entries. Playing a cerebral, poised, and calculated game from the flank while making smart decision after smart decision is the best explanation I can come up with for the manner in which he toyed with OHL defenders and goalies; even in a season where goal scoring skyrocketed from previous campaigns.

Some view Quinn as a fast skater, but it’s his agility and elusiveness that create bigger problems for opponents rather than straight-line speed. The OHL this season seemed awash with passive defenders, lazy backchecking, over-anxious goalies, and a lot of puck gazing, so assessing any prospect’s balance into traffic or forays into the opposing zone at top speed becomes tricky. Nonetheless, Quinn should be credited for using his speed to take a defender to the woodshed — outside or inside — and playing with high levels of confidence and fearlessness into the mass of bodies despite having a relatively thin frame. Quinn is a tough competitor who is willing to fight for pucks and handle the disc in tight spaces. Defenders who try to contain or fix him into the corner run the risk of getting their ankles broken, but they also have to respect Quinn’s elite shot-release combination, to include his backhander.

Quinn’s positioning is as close to impeccable as it can get for a teenage winger. The puck seems to gravitate towards him and for good reason — his timing, anticipation and quick first step lead to loose pucks being collected while opponents are still digging for a puck that is not longer there. Quinn plays with aggressiveness and is willing to take risks, but making snap decisions with time at a premium seemed to yield a high success rate. If a window closes, Quinn is smart enough to peel back and recalculate, utilizing his point men of a backdoor trailer with a perfect tape-to-tape pass. Quinn definitely has a playmaking gene, but he also seemed to grasp his role while playing with Rossi which was to get open and sling pucks on net.

The intangibles are plentiful. Quinn will throw bodychecks, stick up for teammates after the whistle, battle hard for low-slot positioning against bigger defenders, and he is one of the league’s craftiest penalty killers in terms of looting pucks and creating scoring chances out of one-on-one scenarios. Pound for pound, Quinn’s draft season was practically storybook, and it’s easy to understand why so many are in love with his game.

Sharpshooting #NHLDraft prospect @jackquinn_19 of @Ottawa67sHockey has spent his entire life near the nation’s capital and knows how special it would be to stay close to home with @Senators.@KubotaCanadaLtd | @OHLHockey 🎥 pic.twitter.com/Vyo0Gk8avd