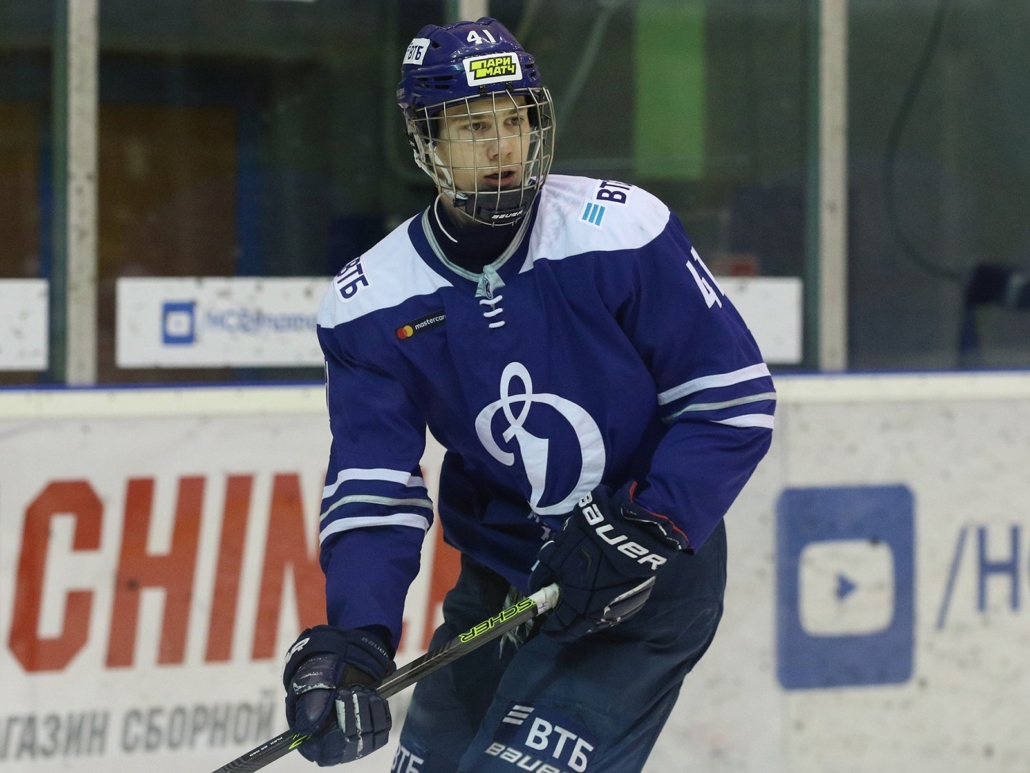 Long and lanky, Bogdan Trineyev is one of the more interesting first-year, draft-eligible forwards playing in Russia this year. Though far from a finished product, what Trineyev could be in the next three to five years is evident when watching him in both the MHL and international play. His coaches at both levels clearly recognized this potential, as Trineyev saw plenty of ice time with two other highly touted 2020 draft prospects in forwards Ivan Didkovskiy and Dmitri Zlodeyev.

Perhaps the most impressive aspect of Trineyev’s game is his compete level. Though still physically immature, Trineyev has no qualms about playing the man — especially on the forecheck — or going into the dirty areas on the ice. Additionally, he can be seen engaging opposing players after the whistle, particularly if it looks like one of his teammates was on the receiving end of a cheap shot. At the moment, his physical disposition can backfire, as Trineyev often gets pushed around or aside by more physically mature players. As he gets older and gains strength, his mentality will have a greater payoff.

Another impressive mental attribute is Trineyev’s willingness to push the envelope of his abilities. Like many young players of his height, Trineyev’s stickhandling abilities haven’t quite caught up to his size. However, Trineyev refuses to let that interfere with his game and he regularly attempts slick maneuvers when if necessary. As the season progressed, Trineyev began to convert on more of these attempts, including some deft skate-to-stick plays and several successful attempts at splitting opposing defenders.

Offensively, Trineyev displays a high offensive IQ, and the aforementioned willingness to provide screens and forecheck. He consistently supports his teammates without the puck, getting open for passes in dangerous areas. Despite this ability to get open, however, Trineyev isn’t much of a scoring threat away from the net; his shot, while accurate, is average to below-average in terms of power. Trineyev possesses average passing ability. He doesn’t project as a 50-assist winger, but he executes the necessary passes a winger needs to make. Trineyev is quite versatile on the power play as well, alternating from the net front, bumper, and half-wall positions. Additionally, Trineyev anticipates very well and is unchecked in open ice when possession changes hands.

On the defensive side of the ice, Trineyev can get sucked in low, leaving his point man open. It often looks like he has a center’s mentality, yet while he can get out of position, Trineyev shows real effort in both the defensive zone and while backchecking through the neutral zone. Trineyev also is willing and capable at blocking shots.

Trineyev’s skating ability, as one might expect from a 6-foot-3 teenage winger, could stand to improve. He has the tendency to skate a little upright, with a narrow base that takes away some acceleration and overall speed, although his speed can be deceptive, especially in one-on-one situations. Trineyev’s crossover work and edges in general, however, are pretty good, as he can gather some good impressive speed while rounding the net or regrouping in the neutral zone.

Dynamo’s trio of Trineyev, Didkovskiy, and Zlodeyev has shown impressive chemistry and could be a mainstay for Russia on the international scene moving forward. Although it likely takes some time for Trineyev’s body to physically mature enough to be ready for the NHL, the underlying skill is there.