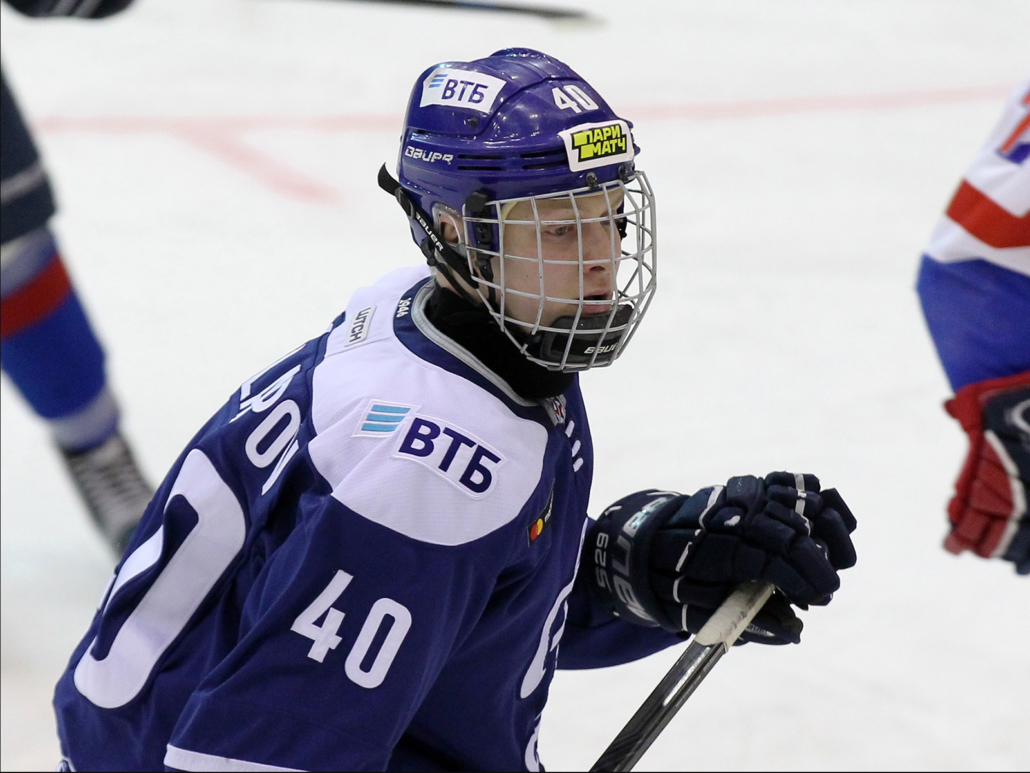 While some first-year draft-eligible players are fortunate to receive the premium ice-time and line mates needed to really make an impression scouts, a vast majority of prospects are not as lucky; Anton Kosolapov, a shoot-first winger for JHC Dynamo Moskva, is one of those unlucky ones, as he plays on a fairly deep squad that challenges for a league title every year. Despite these disadvantages, however, Kosolapov has had a relatively productive draft year, totaling 22 points (15 goals, 7 assists) in 63 games, and leading the team with three points (2 goals, 1 assist) in four playoff games.

Kosolapov’s skating is average from a speed standpoint, thus making it a work in progress. He is a bit hunched which limits his acceleration, although his low center of gravity helps him maintain balance as he maneuvers through the neutral zone. His edges seem fairly strong, especially when cutting to the net, yet the lack of a separation gear allows backcheckers to catch him with frequency. In general, however, Kosolapov can get to where he needs to go.

Kosolapov’s puck skills are mostly highlighted by his shot and his hands. He is not very creative with the puck and his passes and set-ups are rather predictable. He could stand to be more creative for his linemates while using dekes to open lanes, but he rarely gives up the chance to fire pucks on net. Kosolapov has soft hands to corral or deaden bouncing pucks which helps him get into shooting position in danger areas. Although most of his shots appear to be from low or medium-danger areas, his shot power and accuracy force goalies into making tough saves. In terms of hockey sense, nothing Kosolapov does particular stands out.

From an intangibles standpoint, Kosolapov plays a textbook North-South game on or off the puck, although he does a respectable job covering his point man defensively while keeping his stick active in lanes. He isn’t used to kill penalties and is far from a stopper in his own end, but his positioning and effort in the defensive zone appear acceptable. On occasion, Kosolapov will give himself up for the sake of a possession and provide a screen near the net. Nonetheless, Kosolapov could do a better job getting open in the offensive zone and anticipate better to improve the lethality of his shot attempts.

Kosolapov is not one of Dynamo’s more-heralded draft prospects, but he was able to earn a regular shift, albeit with incredibly favorable zone starts. His projectable frame and production in a depth role could make him a late-round candidate this year or a draft overager down the line.