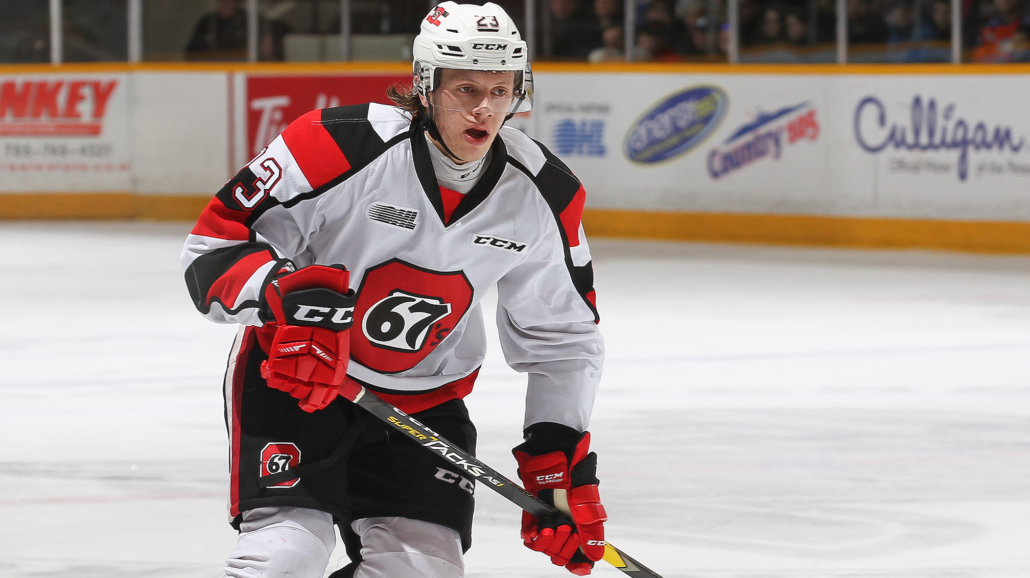 One of the more exciting forward prospects in his class, this Austrian-born scoring machine finished as the OHL’s leading scorer and won the league’s top player award. Rossi is a consistent breakaway threat, but he also contributes in other areas thanks to a high-end motor, strong balance on the puck and an acute grasp of how plays will unfold before him. There is something to be said about a top draft prospect whose resume is primarily based on his league and postseason play, and it could be a good thing that Rossi will never play in any major international events that may otherwise scrutinize one of the more complete skill sets you’ll find in a teenager. A dynamic playmaker with elite finishing skills to boot, Rossi is a critical possession driver for Ottawa, which was the OHL’s top teams and would have challenged for the league title.

Rossi is a magician with the puck and displays a tremendous amount of patience and elite vision. More times than not, Rossi will delay until the smallest of windows remains open. This applies to both lateral feeds into traffic and from wide shooting angles. Opponents have struggled slowing him down, and he’s already at the point in the season where coaches seem to have stopped line matching against him. Like most super scorers, Rossi dictates the tempo. When he hits the ice, there isn’t a shred of doubt or apprehension that may prevent him from executing set plays or breakouts to the letter. He commands everyone’s attention and the puck always seems to be on his blade.

Rossi has an arsenal of moves to finish from anywhere in the offensive zone. He boasts an accurate slapper, but it’s his snap-shot with little backswing that seems to handcuff goalies with regularity. He has soft hands and excellent hand-eye coordination to hammer pucks off the pass, but he’s also able to corral pucks in full flight and quickly transition from skate to stick or backhand to forehand while making a mad dash to the net. Once he’s below the hashmarks, Rossi is an unpredictable as they come, and he’s shown confidence by attempting trick shots with little to no time and space.

Although you shouldn’t classify him as a stopper in the defensive zone, Rossi does kill penalties and has a clear understanding of his role as a center and will support his defensemen below the circles, to include covering a vacated slot. Rossi is very good on faceoffs and is entrusted with late/close situations at all strengths. He hustles on the backcheck and has a quick stick to loot unassuming puck rushers before transitioning the other way. Like most young forwards, Rossi can be guilty of puck gazing and allow opponents to get a step on him towards the net. He also isn’t physical in a classic sense, and Rossi’s upper-body strength isn’t enough to win many board battles. Of course, the quickness of feet and stick are in concert with his sharp processor and gaining inside positioning against bigger players is more of a result of anticipation rather than brute strength.