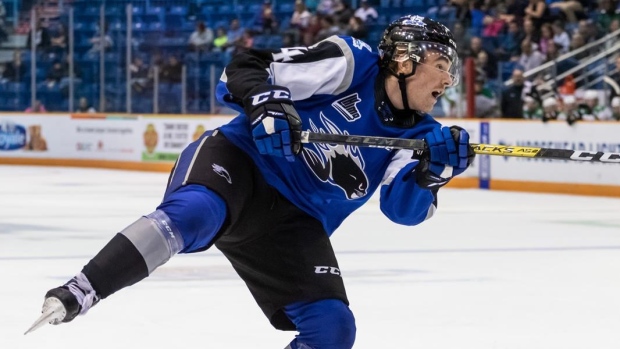 The leading goal scorer among QMJHL defenseman with 20 tallies in 64 games, Poirier nearly tripled his production from the season prior by finishing with 53 points — second only to teammate William Villeneuve. He also led all defensemen in shots (261) and “dangerous” shots (76) while logging over 20 minutes a game. Poirier, along with Villeneuve and Charlie DesRoches provided Saint John with the luxury of three playmaking defensemen who could control the reigns of the attack at any time. From this group, however, it was Poirier who was the most aggressive and involved. Selected second overall in the 2018 QMJHL Entry Draft, Poirier played for Team Canada at the 2019 under-18 Ivan Hlinka tournament (1 goal, 2 assists in 5 games) and was chosen to play at the 2020 CHL Top Prospects Game and for Team QMJHL at the U20 Super Series (1 assist in 2 games).

Poirier may look bulky as he nears 200 pounds, but he is as agile and elusive as they come. His straight-line speed is above average for a defenseman, but what separates Poirier from most of his peers is his escapability, tight-quarter quickness, and edgework. Having a thick frame helps him maintain balance as he powers or weaves through the neutral zone, and Poirier can execute consecutive directional shifts without losing steam. He also is a coast-to-coast threat who posterized some of the QMJHL’s most reliable defensive forwards and rearguards as they tried to check him. Poirer is both comfortable and confident when walking the line and controlling the puck under pressure,  and he shows poise when backed into a corner by reversing direction or delaying for that extra second to dupe a forechecker away from him. Opponents also need to be mindful of overcommitting or puck gazing with Poirier running things as he can pull off a nifty dangle or toe-drag in addition to other ankle-breaking moves.

Poirier is the quintessential power-play quarterback and offensive defenseman, and he easily is in the top 10 percent of all 2002-born draft eligibles in that category. He also boasts a plus-plus wrist shot that he uses with regularity but he’s a bit of a throwback in that he won’t hesitate to unload a slap shot from the point. A critical aspect of Poirier’s shot proclivity is the combination of a quick release and pinpoint accuracy — if he misses the net, it’s usually not by much. Poirier frequently joins the attack or creates one himself, and he will hover or roam near the slot throughout the duration of shifts inside the offensive zone. This helps him snap shots off the pass or sling an off-balance wrister labeled for an area where the goalie is forced into making a tough save. Poirer’s ability to shoot or pass while looking off, plus his dangles and spin moves that give him the extra second needed to wind one up, forces opponents to stay on their toes any time the puck is on his stick.

As good a shooter as he is, however, Poirier is equally impressive distributing the puck on either his forehand or backhand and creating scoring chances on his own. He has a very high hockey IQ in terms of spotting multiple pass options and delaying when appropriate, plus he puts the perfect touch on timing or precision plays. He is a danger to thread the needle anywhere on the ice, to include home-run passes up the gut or a lengthy bank pass on the tape.

There’s no way to sugarcoat it — Poirier needs to work on his overall defensive game. Although his effort is commendable and he is strong enough to win puck battles via hard shoves and a quick stick, Poirier is a massive rover who ventures far away from the slot and acts more like a fourth forward who desperately wants to counterattack.  Poirier floats from the slot during attempts to neutralize opposing cycles and he can end up as high as his own blue line, although he does possess the smarts to make timely reads or step-ups to break plays up. Naturally, these consistent forays away from his defensive responsibilities led to breakdowns in coverage that resulted in high-danger scoring chances or forced his retreating forwards into stick fouls. Poirier saw time on the penalty kill but he should not be considered a stopper during late/close situations, where his contributions are limited to quick clearing attempts delivered with the right touch.

Here’s that goal by Emil Andrae in the 3-1 loss to Russia. High-IQ type stuff here, but if you watch enough of Andrae you know that’s par for the course. It’s a risky play that only a few defensemen his age can pull off. Nice work by Oskar Magnusson and Gabriel Sall to set it up. pic.twitter.com/uTaOkjrQoE