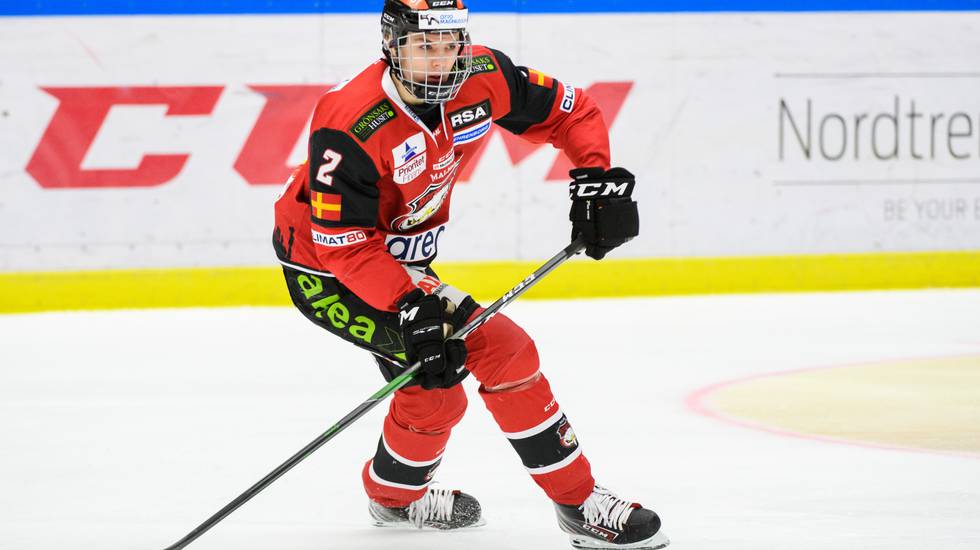 A mobile blueliner with size, Grans was second to Emil Andrae in defenseman scoring in the J20 Superelit’s South Division with 22 points (3 goals and 19 assists) in 22 games. He also played for Sweden’s under-18 team at the Ivan Hlinka (1 assist in 5 games) and at the February Five Nations (1 assist in 4 games). Grans appeared in 21 games at the SHL level as a depth defenseman with an average ice time of 9:41 per contest. He participated in J20 action in chunks throughout the season, including a handful of games of the second portion of the schedule (Forts) which determines which teams will be relegated.

Grans has very good mobility in all directions and is never hindered because of his speed or footwork. His overall skating package is difficult to assess because he can look graceful and fluid on one shift; gangly and awkward the next. The latter seemed to be more from indecision, however, as a confident Grans can really glide up the ice and even sidestep pressure before entering the zone cleanly. Again, his first step, straight-line speed, acceleration, and edgework are above average for a defender in a 6-foot-2, 200-pound frame, and there are times when his skating style and ability to stickhandle his way into time and space is reminiscent of 2019 first-round pick Moritz Seider. He has very soft hands both forehand and back to handle difficult passes and is quick and effortless with his skate-to-stick transition.

All things considered, Grans is an excellent passer although he isn’t much of a playmaker and can be guilty of puck mismanagement, albeit in small samples. He has confidence in his abilities to deliver the puck on the tape and he seems to know exactly what he wants to do upon retrievals behind his net. In terms of playmaking inside the other end, Grans is more safe than creative. A thorough study of his entire point total revealed mostly secondary assists from simple d-to-d passes on the opposing side of the red line rather than end-to-end rushes or pinpoint seam passes. When his game is humming, the most impressive aspect of Grans’s breakout game is the touch and timing of his chip or lead passes; many of which are delivered looking off. This not only reveals Grans’s confidence in his passing, but also his sixth sense to sense pressure and the whereabouts of his partner or forwards. Time and again, Grans will trap multiple forecheckers with precise passes from either forehand or backhand. Grans likes to shoot the puck and will fake shot multiple times while walking the line. However, both his slapper and his wrister can be classified as average in power and release but above average in accuracy. Although he looks like an intimidating bomber, Malmo’s power play mostly ran through forward Oskar Magnusson (who often shared the point with Grans) and power winger Eric Engstrand.

Grans’s overall defensive game is adequate but inconsistent. The best explanation for that assessment is that the difference is split between impressive smothering performances and bench-worthy stinkers. He utilizes his long reach and quick feet to react to rapid changes in puck travel and will apply hard shoves to try and knock an opponents off balance. You rarely see Grans stapled to the low slot and he will pounce on forwards near the half wall with proper timing, especially on the penalty kill. Grans appears more than willing to assume risk when he activates in any zone and it seems as if his partner at every level understood this. The results were more mixed on the international level, however, as Grans needed to bailed out time and again for either overcommitting far from the danger areas or treating the puck like a hot potato. He isn’t overly physical and can be loosey-goosey with his gap coverage and crease protection, although his stick work and hand-eye coordination are impressive. These traits likely explain why he was used sparingly on the penalty kill.