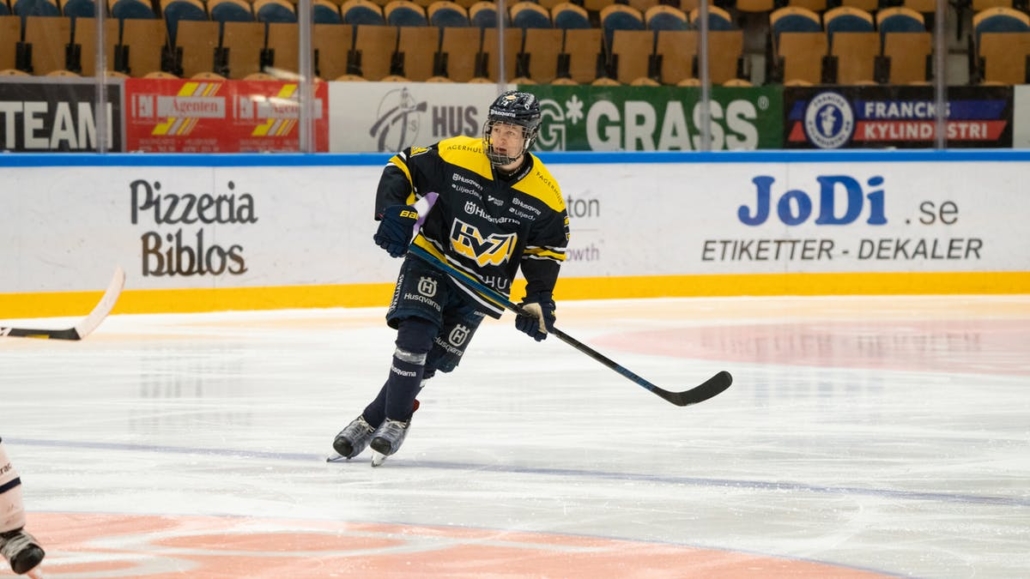 A gifted offensive defenseman who missed most of the first half with an injury, Johannesson in the second half was on HV71’s top pairing alongside Emil Andrae and crushed the J20 Superelit’s Top-10 in defense scoring with 20 points (7 goals and 13 assists) in 17 games. He also performed in two games for Sweden at the under-18 Five Nations tournament in February but was held off the scoresheet.

Johannesson is an effortless skater who moves with fluidity and confidence. His mobility in all directions is impressive, similar to 2018 first-round pick Nils Lundkvist. Johannesson is capable of using his wheels to not only beat the Superelit’s quickest forecheckers to the puck but wheel northwards for an impressive, often graceful rush up the ice. He can be a one-man breakout who knows how to trap overzealous forecheckers by remaining poised under a double team and dropping a quick sidestep to leave them in the dust. Once he crosses center, Johannesson can posterize fleet-footed forwards and force defenders well off their line. This is when Johannesson is at his best — with time and space in the “Grey Zone” — because opponents have to respect his multi-directional speed and puck control, but also his plus-plus shot. He also pivots consecutively and can lean low to the ground to handle hard shoves without losing his balance.

Much like his partner Andrae, Johannesson is one of the better defenders in the draft class at creating his own shot. He brands a hard wrister but also gets good wood on his one-timer attempts from the high point. His shot from long distances won’t overpower goalies but he uses multiple fakes and a quick release that helps generate rebounds. Practically everything Johannesson does with the puck is hard, so teammates need to be ready for crisp one-touch or slap passes, especially when playing catch from short distances on the power play. That doesn’t mean Johannesson doesn’t put the right touch on his passes, however, and playing with gifted puck wizards at both the club and national team level pair him with multiple soft-mitted options. He is also capable of making multiple moves to get inside the hash marks and either wire a shot or no-look a pass to the wing for a slam dunk or one-timer. As much of a playmaker as Johannesson can be, he still averaged 2.75 shots per game (55 shots in 20 contests).

Overall, playmaking and shooting — in conjunction with his impressive mobility — make Johannesson a primary option to not only quarterback any power play, but also keep it humming. You also don’t need to move heaven and earth for some analytical study to identify Johannesson as one of the most accurate passers among draft-eligible defensemen.

Johannesson’s contributions in the defensive end are centered on quick stickwork and timely reads. His ability to keep the net area clear of traffic is limited to harassment and occasional shoves, but opponents controlling the puck down low need to be cognizant of Johannesson’s intelligent stick techniques. He also wins a fair amount of board battles against players of all sizes and showed no aftereffects from the hand injury that had shelved him for so long. Although he is a smart and elusive player with the puck on his stick, the amount of turnovers and hasty decisions increase in frequency when facing a physical group of forwards. This is natural for an undersized “offenseman”, but Johannesson deserves credit for holding his ground and not making it easy for opponents. Additionally, he has the wherewithal to stick around a puck battle long enough for it to squirt in his favor and allow him to make an instant charge the other way. Johannesson was a tertiary option on the penalty kill for both HV71 and Sweden, and his ice time seemed to decrease when a lead needed to be maintained late in the third period.