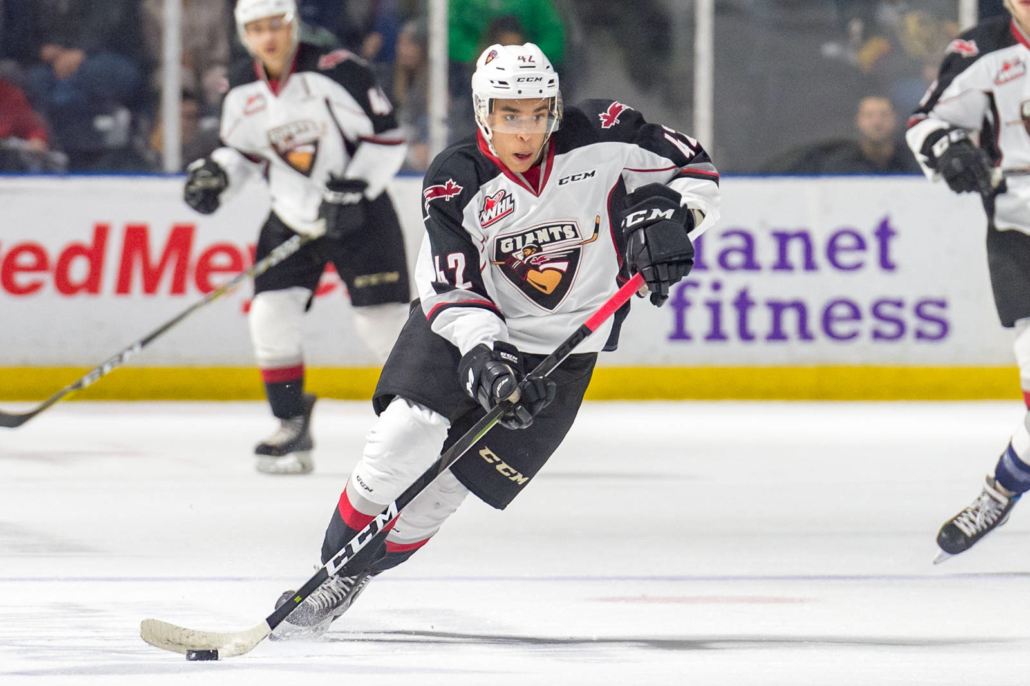 A rugged winger with impressive puck skills and a high hockey IQ, Sourdif has been a high-value target in NHL draft circles for quite some time. He went third overall in the WHL’s 2017 Bantam Draft and was selected to play for Canada at the 2019 Ivan Hlinka tournament, where he posted 5 points in 5 games. He also played at the 2020 CHL Top Prospects Game in the midst of a solid draft season in which he was deployed to Vancouver’s top line and finished third in team scoring. Sourdif was a staple on the power play where he filled a variety of roles and also killed penalties with center Milos Roman. Last season, Sourdif was a key contributor to Vancouver’s march to the seventh game of the WHL Final.

Sourdif is a strong skater with very good speed and excellent balance. He is also agile in both open ice and in tight spaces, and he will use a series of moves while in flight to help accelerate past an opponent. Sourdif enters the zone with confidence and can cut back or pivot on a dime, but his delay tactics once inside the other end are by no means designed to only look for a trailer or cutter. Sourdif will make snap decisions to advance the puck right into the teeth of an opponent’s box coverage and keep the puck on a string before unloading a shot from the slot. He can excel in freewheeling track meets as often as he is effective in slogging matches.

It’s not often you see a physical teenage winger who can play and think the game at an advanced level. Sourdif gives opposing coaches all kinds of matchup issues because he can overpower finesse defenseman in board battles or posterize the stay-at-home types in one-on-one scenarios. Not only does Sourdif make smart decisions both on and off the puck, but he is capable of delivering precision setups through tight windows when it’s least expected, albeit several are of the risky variety. He has very soft hands and can settle the puck flat while moving at maximum speed which helps him put the perfect touch on cross-ice or saucer passes from his forehand or backhand. Once he gets inside the zone, Sourdif can blister a nasty wrist shot with a lightning-quick release that is usually labeled for the upper half.

Physicality is a big part of Sourdif’s game, and he will not back down from a challenge. Not only does he deliver hard open-ice hits, be he can also be a menace along the boards and gladly serve as a net-front presence. A unique aspect of Sourdif’s game is that he can be as violent on the puck as he is off it – unassuming defenders trying to check him are susceptible to a stiff shoulder or jolt from Sourdif’s rump, thus knocking them to the ground.

Sourdif is a reliable checker who applies pressure in all three zones and uses his strength and quick stick to disrupt opposing possessions. Not only does he kill penalties, but Sourdif is on the ice for late and close situations and has even been double shifted at the end of periods. He plays with a lot of energy and is willing to make the necessary sacrifices that help preserve a late lead.

A skilled offensive forward who can score and make plays at both ends, @SourdifJustin has developed into a top #NHLDraft prospect while playing for his hometown @WHLGiants.@KubotaCanadaLtd | @TheWHL 🎥 pic.twitter.com/XvMbgXMkm9