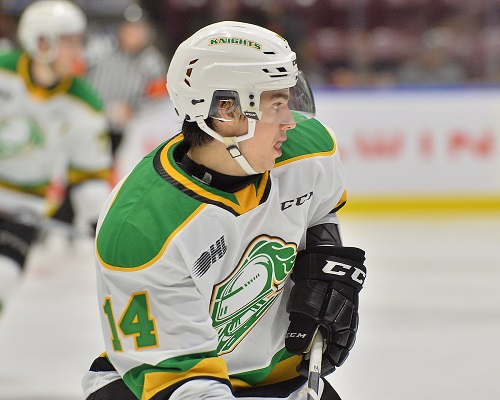 There’s no rule that says prospects developed by Dale Hunter and his staff with a perennial powerhouse in London are locks to become NHL stars. But it’s hard to argue against the program’s track record for graduating the likes of Patrick Kane, John Tavares, and Mitch Marner. With Evangelista, Hunter took a well-known prospect (14th overall in 2018 OHL Priority Selection) and helped turn him into not only a top-line player, but one of the better first-year eligibles from a deep OHL pool.

Evangelista started the season on a support line alongside preseason darling Antonio Stranges, but it didn’t take long for the Toronto native to leapfrog his linemate into the Knights’ top trio and flank center Connor McMichael, who finished third in the OHL in scoring. The knee-jerk reaction by the stat-watchers would be to call Evangelista’s production – 61 points (59 at ES/SH) — the result of a superior linemate, but Evangelista quickly carved out his own reputation as an expert stickhandler, puck possessor, and overall threat inside the offensive end. Watch Evangelista long enough and you can see why Hunter entrusted him with so many critical situations.

Evangelista is a good skater who relies on agility and rapid directional changes over elite straight-line speed or an explosive first step. He is well balanced for his size, mostly because he keeps his feet wide and a low center of gravity. Although interdicting him before the line is doable, Evangelista usually enters the zone cleanly and will cut inside on a dime to throw a zone defense into a state of confusion. Once he has time and space, Evangelista controls the puck with poise under pressure and uses sharp vision and accurate passes that split the seam and wind up on the tape of a linemate for a clean look.

If there is one word that best describes Evangelista’s scoring prowess, it’s opportunistic. Having soft hands to cushion the puck is part of his success, but he also wastes no time trying to be fancy and knows exactly what he wants to do; seemingly before the puck is even on his blade. Evangelista doesn’t own an overpowering shot, but he hits his spots after releasing it quickly. Playing with a hard shooter like McMichael made him more of a set-up man, but goalies who slept on Evangelista’s craftiness became easy victims for a juicy rebound in the slot or a snipe upstairs. His 147 shots ranked seventh among Knights forwards.

Defensively, Evangelista is willing to take hits and support teammates in puck battles. He has a clear understanding of his role as a winger in a 1-2-2 forecheck by starting and stopping throughout opposing breakout attempts while keeping his stick active and using maximum concentration. You rarely see him finish a check with authority and he is far from physically intimidating, but Evangelista anticipates and reacts properly while using quick feet to press an opponent into a bad decision. He was used on the second PK unit for most the season and London posted an OHL-best 83.8 percent effectiveness on the kill.

The @GoLondonKnights are in Hamilton tonight to face the Bulldogs. Luke Evangelista comes into the game on the heels of a three-point performance and a first star selection. Listen to the game on @AM980News and the @RadioplayerCa app pic.twitter.com/8ASgass4IZ