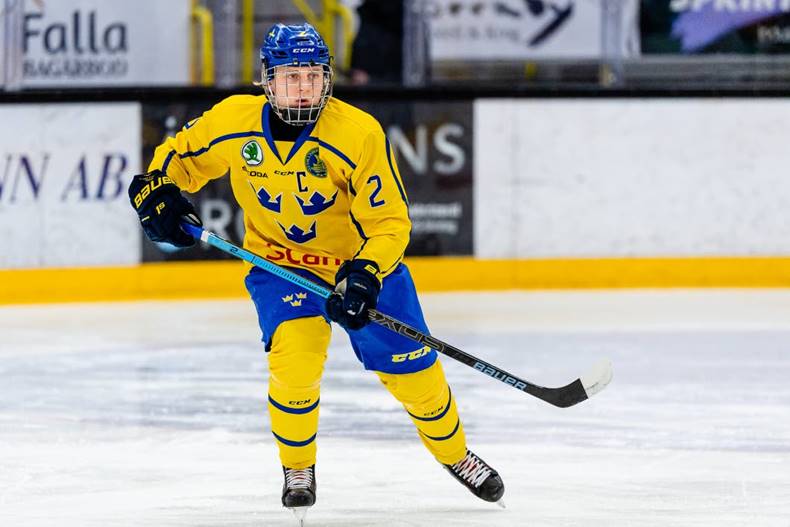 The central figure on defense for Sweden’s under-18 national team, Andrae is a team-first leader who enjoyed individual success at both the club and international level. He was HV71’s No. 1 defenseman while paired mostly with fellow 2020 draft prospect Anton Johannesson, and Andrae lived up to his billing as a premier puck rusher and power-play quarterback by leading all J20 Superelit rearguards in scoring with 38 points (11 goals, 27 assists) in 40 combined games. Andrae’s consistent production was also evident on the international stage, where he was one of the top assist getters among defensemen in three major U18 tournaments — the Ivan Hlinka (4 assists in 5 games), the Five Nations in November (4 assists in 4 games), and the Five Nations in February (1 goal, 3 assists in 4 games). In 29 combined international matches dating back two seasons, Andrae has 24 points (5 goals, 19 assists). He also made his SHL debut this season for HV71, averaging 6:21 a game in 10 matches for a contending squad.

Andrae is a well-balanced and elusive skater with impressive agility and footwork. He isn’t a speed burner and can run out of gas at the end of shifts, but he consistently avoids or outpaces back pressure. He may not look loose-limbed, but Andrae can put a series of moves on an over-aggressive forechecker without moving more than two or three feet. His straight-line speed is above-average and his stride is somewhat short, yet Andrae’s quickness definitely leans towards the deceptive side; something evident when challenged at his line in a one-on-one scenario. There always seems to be recalibration whether Andrae’s taking the puck up ice or defending against an opposing rush, and his determination and drive make up for a lack of mind-blowing speed. A key components to Andrae’s skating is his anticipation which usually lands him on the right side of things more times than not. Being a gambler has its drawbacks, however, and Andrae’s consistent forays and deep pinches can leave him trapped as his mates rush back to defend an odd-man rush.

Andrae possesses elite puck skills and put him in the running for the most impressive among all 2020 draft-eligible defensemen. He is an excellent playmaker; one whose teammates clearly rely on to produce high-danger chances either off the rush or cycle. Andrae’s footwork is a critical component to his playmaking, as he uses stutter steps or multiple fakes in any direction to leave pressure in the dust as he makes a beeline for open ice. Once he’s in the clear, Andrae rarely takes his eyes off the goal when his intentions are to feed the back door or go across the seam. He puts the perfect touch on his passes and can deliver pucks on the tape from any distance and from either forehand or backhand. Forecheckers need to be wary of Andrae’s home-run pass proclivity the second he turns to retrieve a puck in his own end.

Andrae owns a plus-plus shot, not only for its velocity and release but also for rapidity of his angle changes. Andrae presents goalies with a variety of looks, making it difficult to guess his intentions. Compounding things is his ability to slap-pass, pump fake, or even look off before blasting a shot on net. He’s an accurate shooter whose attempts from as high as the blue line will generate rebounds.

Andrae is a beyond poised on the breakout but also when being pressured in his own end and his back is to the wall. He is reliable one-on-one defender with a short gap who looks to deliver hits and battle hard for positioning. The measurements may look like they’re describing a finesse “offenseman”, but Andrae has a very high compete level and it shows in the way he continues to fight for pucks and uses his lower-body strength and rapier-like stick thrusts to neutralize an opponent on the puck. Andrae uses superior anticipation and short routes to intercept passes ranging from chips to cross-ice attempts, and he transitions from defense to offense as well as any of his peers. He also is a solid bodychecker who will plaster unassuming puck carriers to the boards or line someone up for a jarring open-ice hit. Both HV71 and Sweden used Andrae on the penalty-killing unit and his ice time seemed to increase as the games grew tighter.

Here’s that goal by Emil Andrae in the 3-1 loss to Russia. High-IQ type stuff here, but if you watch enough of Andrae you know that’s par for the course. It’s a risky play that only a few defensemen his age can pull off. Nice work by Oskar Magnusson and Gabriel Sall to set it up. pic.twitter.com/uTaOkjrQoE