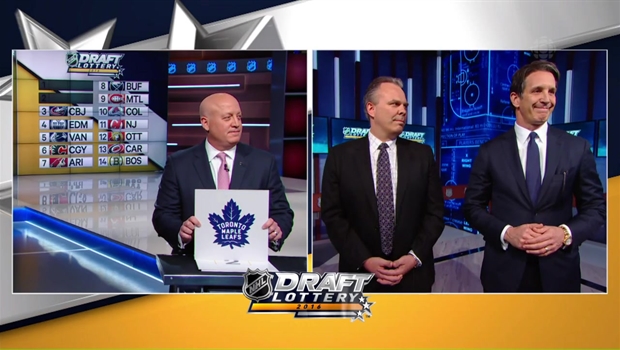 NEW YORK (The Draft Analyst) — With their season no longer in doubt and another playoff-less spring on the horizon, the Toronto Maple Leafs in March looked far from a team looking to permanently occupy the NHL’s basement for the right to draft first overall.

And while some may have silently wished against the consistent 60-minute efforts they saw the youthful Leafs produce as the season’s end neared, the hard-luck losing was generally viewed with optimism by a suffering fanbase accustomed to failure and disappointment.

On Saturday night, they finally had something to cheer about.

For the first time in team history, the Maples Leafs won the NHL’s draft lottery and will have the privilege of selecting the first player in the 2016 NHL Entry Draft, which will be held in Buffalo beginning on June 24th.

The Maple Leafs came into the draft lottery with the best opportunity to get the No. 1 pick, having a 20 percent chance over the other 13 teams that failed to qualify for the postseason. The process, which was televised nationally across Canada and the United States, produced a bit of intrigue as the Edmonton Oilers — winners of four of the last six draft lotteries — were bumped by the Winnipeg Jets from the second pick down to fourth, while the Columbus Blue Jackets dropped the Vancouver Canucks from third to fifth.
Center Auston Matthews, a American from Arizona who starred in Switzerland this past season, is the consensus top pick and fills an obvious need in Toronto, but Leafs GM Brendan Shanahan would not reveal his intentions:

“We don’t want to get ahead of ourselves and put the cart before the horse,” Shanahan said after the drawing. “We knew we were going to get a good player, one through four, Having the ability to pick first, we’re going to pick the player we think is the best. I think we’ll discuss it more once we have an idea who that player is. There’s no real need to discuss it now, but our scouts are real pleased with the results.”

This is the first time the Leafs will have the top pick in the draft since 1985, when the draft order was determined by the final standings rather than a weighted lottery system. That year, they drafted rugged winger Wendel Clark after it was revealed that top-rated prospect Craig Simpson did not want to play for Toronto. Clark became a popular player and went on to score 260 goals for the Leafs before retiring in 2000.

1. C Auston Matthews (ZSC Lions, SUI): The Hockey Gods rewarded Toronto’s tortured fanbase with the opportunity to bask in the glee from receiving the club’s first top pick in 31 years. That pick should be Matthews, a dynamic, franchise-changing pivot who nearly won the Swiss League’s MVP award as an 18-year-old rookie. A dominant player whether he’s shooting it or dishing it out, he’s ready for the rigors of the NHL, and his humility and upbringing will prevent the GTA pressure cooker from getting to him.

2. LW Patrik Laine (Tappara, Liiga): Laine is not only the best pure goal scorer in his draft class, but is the most lethal draft-eligble sniper since that guy named Alex Ovechkin back in 2004. A big-bodied winger with a deadly shot, Laine was a catalyst behind Finland’s WJC gold medal and was recently named the Finnish League’s playoff MVP for his exceptional postseason. He gives Winnipeg its first brand-name star since fellow Finn Teemu Selanne, but Laine’s impact on the city will be similar to what Dale Hawerchuk did for it and the fanbase in the 1980s.

3. RW Jesse Puljujarvi (Karpat, Liiga): The Jackets are always tough to play against regardless of record, but Puljujarvi’s enthusiasm and high-end skill adds a dimension the team has missed since trading Rick Nash. He produced a record-setting performance en route to a gold medal for Finland at the world junior chamopionship, and followed it up with an excellent postseason and another gold for his country at last week’s under-18 tournament. Big and strong, yet flashy and graceful, Puljujarvi is ready to contribute immediately.

4. LHD Jakob Chychrun (Sarnia Sting, OHL): There’s simply no reason for the Oilers to do anything else but answer the nagging question about their defense with the draft’s best defenseman. No draft-eligible blueliner embodies what a top-pairing workhorse should be than Chychrun, who has the size, shot, speed and smarts to offset the problems plaguing Edmonton’s backline for almost a decade. He played close to 30 minutes a night for a tight-run Sarnia squad and has exceptional recovery time between shifts.

5.  C/LW Pierre-Luc Dubois (Cape Breton Screaming Eagles, QMJHL): The Canucks may have missed out on the draft’s big names, but this bruising power forward may very well make the others a footnote in hockey history. Dubois is a fierce competitor with the build of a linebacker and the hands of a magician. He’s a nightmare to match up against, and his mature build (6’2/205) is a result of a tremendous off-ice work ethic. He may not be as fast as former Canuck pivot Ryan Kesler, but he’s just as good at forcing poor and unfortunate opponents into catastrophic mistakes. A real leader with star potential.

6. LW Matt Tkachuk (London Knights, OHL): The sting from a disappointing season in Calgary gets soothed with the arrival of the draft’s best playmaking big man, who’s not a bad goal scorer either. In the case of Matt Tkachuk — son of former NHL all star Keith Tkachuk — the apple did not fall far from the tree. Matt is a menacing, low-maintence power wing whose zone entries (among many other things) are a thing of beauty. Patient, smart and freakishly strong, the St. Louis native will make money with the young group of studs being assembled in Cowtown.

7. LHD Olli Juolevi (London Knights, OHL): Arizona opted to ignore the need for a high-end defenseman last draft by taking center Dylan Strome over Noah Hanifin, but they won’t do the same in 2o16. They could go for a blueliner with more offensive upside like Mikhail Sergachev or Jake Bean, but Juolevi is the kind of calming presence their collection of skill forwards will need to let them attack without the worry of the stern side of the ship sinking after every rush. He was outstanding as a 17 year old for Finland at the WJC’s, and he’s anchored an inexperienced back end for London. Keep an eye on him as the Knights will likely challenge for a Memorial Cup.

8. RW/LW Alexander Nylander (Mississauga Steelheads, OHL): The Sabres could use some help on their blue line, but seeing Jack Eichel robbed of assist after assist from wingers devoid of finishing has to bother general manager Tim Murray. Enter Alex Nylander, a silky-smooth sniper with the draft’s second-best finishing abilities behind Patrik Laine. Named the OHL Rookie of the Year in 2016, he scored big goals for Sweden at the summer Ivan Hlinka tournament, and followed that up with top-line production at both the WJC and the U18 worlds. Nylander is patient with the puck, but he’s decisive and makes the right choices. And if you recognize the surname, you’d be pleased to know he’s just as good at passing the puck as brother William and father Michael.

9. LHD Mikhail Sergachev (Windsor Spitfires, OHL): A thick-bodied top defender with a howitzer for a shot and outstanding instincts in the offensive zone, Sergachev led all OHL rearguards with 17 goals and finished third in scoring with 57 points in 67 games. His transition from Russia to the North American style was seamless, and he was the Spits’ top option for both the power play and on the penalty kill. He can be physical, but what makes him special is how quickly he transitions from defense to offense. His game is reminiscent of fellow Russian Ivan Provorov in terms of poise and the ability to make momentum-shifting plays in all three zones.

10. C Michael McLeod (Mississauge Steelheads, OHL): Mississauga was loaded with draft-eligible talent this year, but the one guy who drove the proverbial engine was this lightning-quick playmaker who gelled with Alex Nylander to form one of the OHL’s lethal duos. McLeod has size and a soft set of hands, but he’s also superb at the dot, winning close to 60 percent of his draws and used in all critical-faceoff situations. The Av’s could also use some scoring help on the wing, but the gritty McLeod adds the kind of size-speed-skill dimension this entire draft is lacking.

11. C Clayton Keller (U.S. NTDP): A razor-sharp finesse pivot with off-the-charts vision and a predator’s mindset, Keller’s now part of a short but elite list of talented NTDP’ers who crushed the competition before moving on to face tougher challenges. Not that it will matter to Keller, who this season centered the top line and was Team USA’s top player at every international event he participated in. He’s a fiery competitor who refuses to take a shift off and his nonstop motor allows him to perform at a high level regardless of how long his shifts are.

12. C Logan Brown (Windsor Spitfires, OHL): There are a lot of things to like about the 6’6 center from North Carolina: he’s got sick playmaking abilities and a deadly shot (when he uses it), as well as NHL bloodlines (his father Jeff was a defenseman for the the Nordiques and Blues, among others). Nobody questions his God-given talents, and the Sens could sure use some size up the middle. They could go for a pure goal scorer like Luke Kunin, Kieffer Bellows or Julien Gauthier, but Brown offers up the most upside with the shortest path to the NHL.

13. RW Luke Kunin (Wisconsin, Big-10): An arsenal of playmakers within their system will require some serious finishers, and who better than the Badgers’ top goal scorer, who led his team in goals as a freshman after dazzling at the 2015 U18’s and the All-American Top Prospects Game. Kunin is a three-zone thoroughbred with a blistering shot and excellent skating ability who battled through diabetes to produce one of the nation’s finest freshman campaigns. This kid can score goals, and will do so in bunches.

14. LW Max Jones (London Knights, OHL): It’s tough to tell whether the Bruins’ management views the last season as a failure or a success when you consider the summer roster changes. Nevertheless, the Bruins weren’t that tough to play against in 2016, and Max Jones certainly addresses that need. Somewhat buried behind London’s bevy of forward talent, Jones is a freight train on skates with overlooked smarts and a deadly shot. We’ve seen him posterize the best the OHL has to offer, and did so while playing mostly on a third line. He toes that line between rugged and downright dirty, but he can kill penalties and carry a team on his back if the situation warrants it.

*Toronto owns Pittsburgh’s 2016 first round pick from a condition in the Phil Kessel trade.

*Calgary would own Dallas’s 2016 1st round pick if Stars’ defenseman Kris Russell plays in half of their games and they reach the Conference Finals (Condition not yet met).