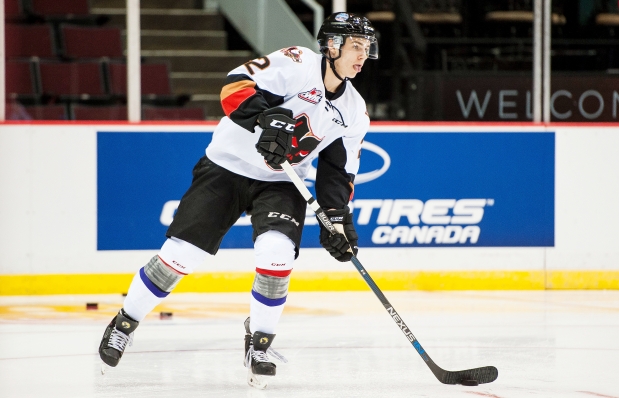 Position: Defenseman
Shoots: Left
Height/Weight: 6’1 170 lbs
Born: June 9th, 1998, Calgary, AB
Obtained: Signed as a free agent by the Calgary Hitmen in 2014.
Notes: 2015-16: Led all CHL defensemen with 24 goals — a Calgary Hitmen single-season record — and finished sixth among WHL blueliners in scoring with 64 points…Broke his foot during Team Canada’s camp for the 2016 IIHF under-18 world championship…Played for Team Orr at the 2016 CHL Top Prospects Game…Picked up an assist in two games for Team WHL at the 2015 CHL-Russia Super Series…Had an assist in four games for Team Canada as they won the gold medal at the 2015 U18 Ivan Hlinka Memorial Cup…2014-15: Broke the Hitmen season record for points by a rookie defenseman with 39 points in 51 games…Finished third in scoring among WHL first-year blueliners… Missed a month with a broken wrist suffered in a 2-1 win over Kelowna on 2/28/15…Led Team Canada-Black defensemen in scoring with a goal and three assists in five games at the 2014 World U17 Hockey Challenge.

A nimble puck mover who grasps the intricacies of offensive-zone play, Bean is arguably the draft’s biggest scoring threat from the back end. He loves to dictate the tempo once the puck is on his stick, and when he does, Bean’s able to showcase elite stickhandling skills and pro-level instincts with cerebral shot selection. Simply put, he’s the kind of threat who keeps opposing coaches hard at work during the day, and restlessly sleepless at night. He loves to utilize his teammates — possibly better than any draft-eligible rearguard, and war-gaming this facet can be problematic since he knows all to well how to sneak between the circles and use his hard, accurate shot. Bean is as agile as a cat with good up-ice quickness and solid balance for a kid who looks smaller than his listed 170 pounds. He’s not a roadrunner, but his edge work is exceptional — similar to the great NHL finesse defenders of the past. Bean will effortlessly glide and weave into openings as he covers ground, but he’s just as active and graceful within the confines of the offensive zone, especially on the power play. He’s got great vision and will whip a tape-to-tape pass through traffic either cross-ice or diagonally.

The downside? To be blunt, he’s a liability in his own end. Bean tries to make up for deficiencies in physicality with smart positioning, but he’s far too inconsistent in that regard. He’s prone to lose his man during board battles or in slot coverage, and he will dangerously put the puck where it has no business going. Lastly, the way he defends odd-man-rushes is suspect, but the most fixable of his defensive-zone warts. Still, he’s too good to overlook in the later stages of the first round, and you have to love the fact that this kid managed to get that kind of reputation without the benefit of being drafted into the WHL.