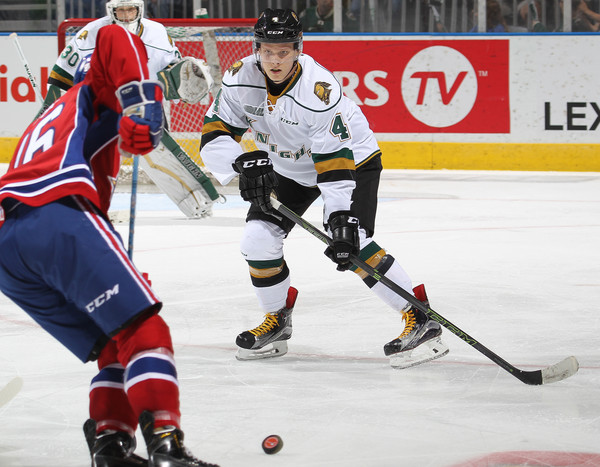 Position: Defenseman
Shoots: Left
Height/Weight: 6’2 182 lbs
Born: May 5th, 1998, Helsinki, Finland
Obtained: Selected 45th overall by the London Knights (OHL) in the 2015 CHL Import Draft
Notes: 2015-16: Finished third among OHL rookie defensemen in assists (33) and points (42) in 57 games…Led all blueliners with nine assists and tied for the most points (nine) to help Finland win the gold medal at the 2016 IIHF under-20 world junior championship… 2014-15: Named best defenseman and Rookie of the Year in Finland’s junior circuit after he was the top minute-eater for Jokerit’s U20 squad…Named Finland’s Junior “A” Player of the Month in November…Had one assist in four games for Team Finland at 2014 Ivan Hlinka Memorial Cup

Playing in the OHL did not seem like much of a priority for this big-bodied puck mover, who was earmarked to stay in Finland with Jokerit of Russia’s Kontinental Hockey League before signing with London right before the 2015-16 season started. And what a season it’s been, as Juolevi has turned out an impressive first half in his first season in North America. While it doesn’t hurt to engineer an attack alongside the likes of Mitch Marner and Matt Tkachuk (among others), we think Juolevi has a lot more to do with the Knights’ prolific offense than simply riding shotgun.

Juolevi is a tremendous, powerful skater who makes carrying the puck up the ice seem effortless. What really stands out is his agility and quickness moving both laterally and backwards. You can classify him as your atypical offensive-minded defenseman who always looks to make a play or expand on one that has already developed. Transitioning from blue line to blue line is his bread and butter, and he expands his options not only from his mobility, but from his exceptional passing prowess and vision. Juolevi’s passes are hard and on the tape, and the acumen he provides while doing so is why he’s so highly regarded. He owns a very hard, accurate shot and uses it with authority on a power play chock full of snipers. The problem is that his vast arsenal of contributions begins and ends on the offensive side of the red line, as we’ve seen him struggle in corners and dealing with the OHL’s more zealous power forwards. That will certainly be a developmental area to address, particularly his leg strength and ability to pin and hold in order to wait for help to arrive. Still, this kid is so entertaining to watch that you draft him first and worry about the teachable stuff later.