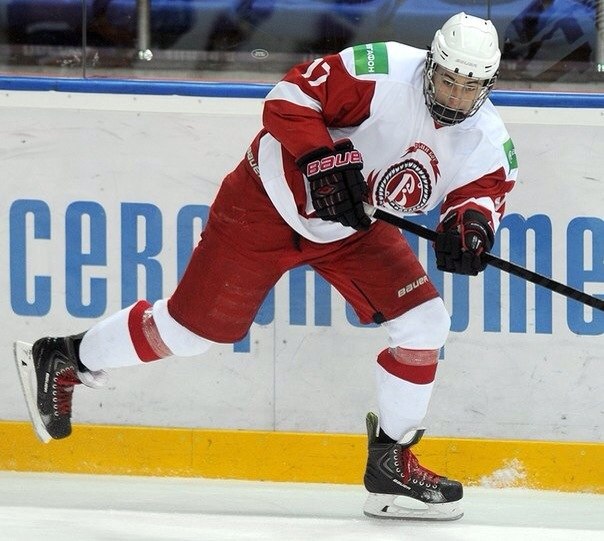 Position: Center
Shoots: Left
Height/Weight: 6’1 180 lbs
Born: June 27th, 1998, Chekhov, Russia
Obtained: Joined Russia’s U18 team on July 1st, 2015 from Vityazi Chekhov (MHL)
Notes: 2015-16: Finished second in team scoring with 12 goals and 14 assists for 26 points in 28 games…Registered a team-best 0.93 points-per-game average…was banned from participating in the 2016 IIHF under-18 world championship after he and his entire team tested positive for a banned substance…Had two goals and two assists in his first three games while centering Russia’s top line at the Under-19 World Junior “A” Challenge in Ontario, Canada…Leads Russia’s U18 squad in goals (9) and points-per-game (1.27) while placing second with 19 points in 15 games…Played for Team Russia’s U20 entry at the Four Nations Tournament in Tampere, Finland last November, where he registered one assist and won 50% of his draws while centering the third line over three games…Tallied a goal and three assists with a team-high 16 penalty minutes in five games at the U18 Ivan Hlinka Memorial Cup, where Russia finished fourth…2014-15: Had a goal and an assist in five games for Team Russia at the 2015 Under-18 World Championship in Lucerne, Switzerland…Registered a goal and four assists in six games for Team Russia, who won the gold medal at the 2014 World U17 Hockey Challenge.

We don’t know if German Rubtsov is representative of some sort of new breed of Russian-trained forward. What is clearly apparent to us is how “North American” his overall game is, and he’s arguably the 2016 draft’s best two-way forward. Rubtsov has been Russia’s go-to guy when it comes to matching up against top opponents, and why not? He’s been blessed with size and what seems like adult strength despite being only 17 years old. Rubtsov has had plenty of international exposure, winning gold at the 2014 U17’s and contributing mightily to the Russian U18 entry which nearly knocked off Team Canada at the Hlinka semifinals. He was rewarded with a place on the U20 roster for the Four Nations in November, but was kept off Russia’s preliminary list for the 2016 World Junior Championship. He took this disappointment in stride, however, as his two-way play and penchant for stepping up guided the U19 team to the gold medal game at the World Junior “A” Challenge.

He is a very strong skater with excellent acceleration and balance. But mix in his mobility with strength and tenacity, and you get a coach’s dream. Rubtsov is a “big play” center who preys on the weak, and his superior playmaking ability and vision enables him to be used in key situations regardless of which end of the scoreboard his team is on. He’s an extremely competitive leader who will involve himself physically if the game is in need of a momentum shift. Rubtsov has a very good shot which he can wire off his back foot or unload via a slapper, and while he is very accurate in terms of getting it on net, we has a tendency to look for the pass as a primary course of action.