Photo courtesy of All Over Press 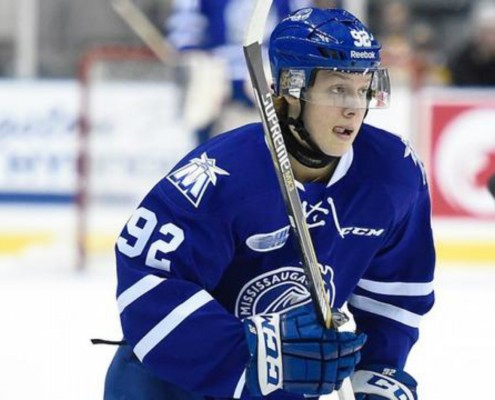 Position: Right Wing
Shoots: Right
Height/Weight: 6’0 175 lbs
Born: March 2, 1998 Södertälje, Sweden
Obtained: Selected by the Mississauga Steelheads in the first round (12th overall) in the 2015 CHL Import Draft.
Notes: 2015-16: Led Team Sweden in goals (5) and points (9) at the 2016 IIHF under-18 world championship…Named OHL Rookie of the Year after leading all first-year players in assists (47) and points (75)…His nine power play goals were the second-most by an OHL rookie…Is 2-for-4 in shootouts…Recorded a six-game assist streak between November 13th and November 27th…Was named OHL Rookie of the Month in October, November and March…Led Team Sweden in both goals (4) and points (9) as they finished fourth at the 2016 U20 World Junior Championship…Played for Team Sweden at the 2015 U18 Ivan Hlinka Memorial Cup, where he tied for the team lead in scoring with six points (two goals, four assists) in five games…Represented Team Orr in the 2016 CHL Top Prospects Game…2014-15: Led AIK’s J20 squad with 25 assists and tied for the team lead in scoring with 40 points in 42 games…Appeared in three games for AIK’s senior club in the SHL…Led Team Sweden in assists (5) and points (7) in six games as they won the bronze medal at the 2015 World U17 Hockey Challenge…Drafted in the 15th round (239th overall) by the Dubuque Fighting Saints in the 2015 USHL Draft.

It’s never a bad thing to have a little “street cred” when Draft Day rolls around, and this Swedish speedster most certainly earned his following a dominant performance as Sweden’s top-line wing at the 2016 WJC’s. And while the Swedes failed to take home any hardware (they lost to the Americans in the bronze medal game), the ability of a youngster like Nylander to uplift his team after a crushing injury to his brother William spoke volumes about how gifted a talent Alex is. Truth be told, his play at a midseason exhibition is a small piece of the pie, however, as he’s produced an outstanding rookie campaign for Mississauga.

He’s an excellent skater with a deadly shot, but he can score goals from in close thanks to a ridiculous set of hands. Nylander is able to make smart decisions as he maneuvers through traffic, and his ability to stickhandle in and around a dense field of sticks and skates while knowing exactly where his linemates will be makes him an indefensible threat on the rush. He’s impossible to prepare for, as he can beat you with his playmaking or his heavy shot. And much like his aforementioned brother, Alexander loves to hang onto the puck for what may seem like an eternity, but is done in a sensible fashion without trapping himself into a corner. He can play either side of center ice, and kills penalties, so don’t you dare consider him a one-trick pony. Nylander should be considered one of the draft’s best goal scorers, but his ability to thread the needle and play selfless hockey makes him one of the few two-pronged threats available for 2016.