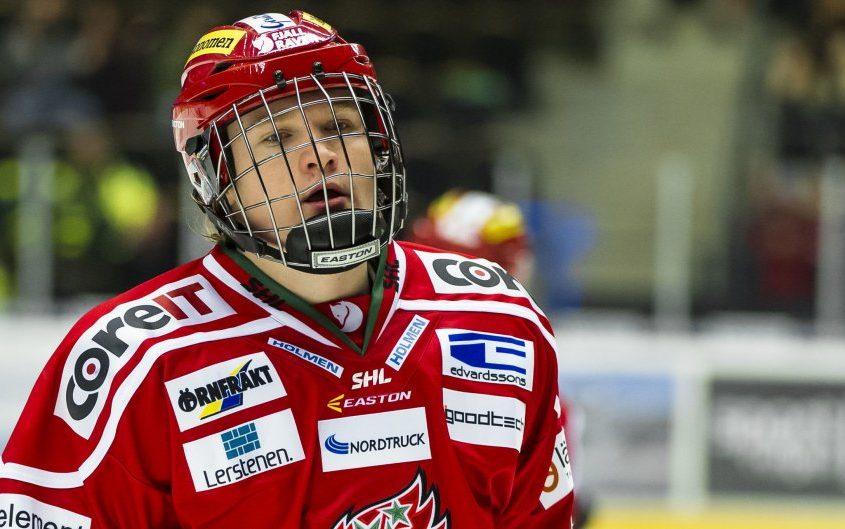 Position: Right Wing
Shoots: Left
Height/Weight: 6’0, 194 lbs
Born: December 1st, 1997 Umea, Sweden
Obtained: Signed two-year contract with Frolunda on April 13th, 2016…Transferred to MoDo from Bjorkloven on April 27th, 2013.
Notes: 2015-16: Led all SHL draft-eligible players in scoring with 16 points and was second with 53 penalty minutes in 49 games…Tied for ninth among SHL forwards with 75 hits…His 86 shots on goal were eighth-best for MoDo while ranking 21st on the club in ice time at 13:50 per game…Named to Sweden’s under-20 National Team for the 2016 World Junior Championship, where he scored a goal in seven games…Led Sweden in scoring with a goal and three assists in four games at the U20 Four Nations Tournament in Russia last August…2014-15: Made SHL debut for MoDo, tallying five points in 24 games…Led MoDo’s J20 (Superelit) club with a 1.33 points-per-game average (36 points in 27 games)…Registered a pair of assists for Team Sweden at the 2014 U18 Ivan Hlinka Memorial Tournament…Placed second in team scoring with three goals and two assists in five games for Sweden at the 2015 IIHF U18 World Championship…Combined for eight goals and seven assists in 17 games at the international level…2013-14: Split the season between MoDo’s J18 and J20 squads…Picked up an assist in five games for Team Sweden at the 2014 World U17 Hockey Challenge.

A spirited and energetic banging winger who off the puck is a nightmare to guard against. Grundstrom is a relentless forechecker who uses his strong build and powerful lower body to frighten defenders into careless mistakes. If there was ever a player to excuse for the constant dump and chase, it’s Grundstrom, whose international resume for Team Sweden is beyond impressive when considering his nation’s lack of elite scoring up front at the junior level. His skill set may resemble that of a grinder, but he’s displayed flash and skill in the limited time he received with MoDo.

He’s a very good skater in terms of mobility and balance, but he lacks breakaway speed. Grundstrom has quick feet and can create separation with his first step, but it takes him a while to reach top speed. Still, this does not impede his ability to press and battle in a timely manner, as his instincts and positioning are excellent. Grundstrom has an above-average shot that he likes to fire from all areas and angles, sometimes to a fault, as you’d like to see him be a little more patient and creative with the disc. But he’s a power forward who likes to use his body, so expect him to use those strengths to generate offense rather than fancy his way onto the scoresheet. He can also be undisciplined at times, but a solid depth option with discernable NHL upside nonetheless.