The Draft Analyst’s Rankings: The top 250 prospects for the 2016 NHL Draft (April) 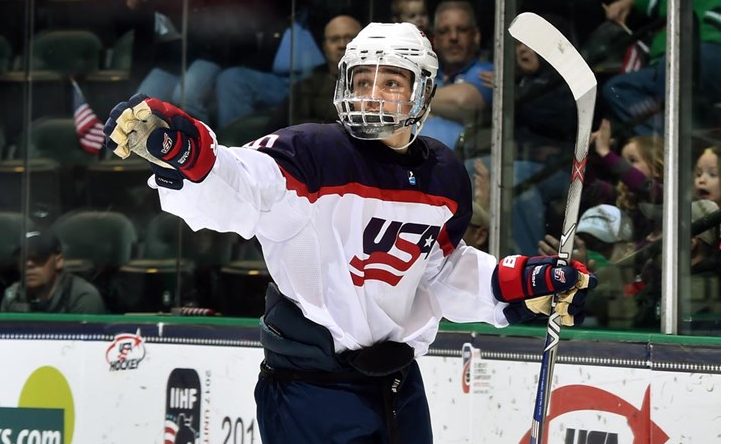 NEW YORK (The Draft Analyst) — It began in August with his Karpat team knocking off Germany’s Krefeld Pinguine in a relatively new Pan-European hockey tournament called the Champions Hockey League; the kind of club-against-club competition played more for bragging rights than anything else. Finnish right wing Jesse Puljujarvi (Ranked No. 3) didn’t have what you’d call a memorable CHL experience — he tallied only two assists in 13 games as Karpat reached the semifinals. Still, it’s the lone blemish on what’s been an otherwise remarkable pre-draft year, as the young power forward followed up a record-setting performance at the last world junior championship with a productive Liiga playoff and leading Finland to gold last Sunday at the under-18 world championship. Concerns about inconsistent play at even strength were silenced during an epic seven-game semifinal series loss to rival Tappara and their stud sniper Patrik Laine (Ranked No. 2), who was the better player of the two during their recent postseason clash. For that, each player gets a bump in our latest rankings, with Laine finally unseating Sarnia LHD Jakob Chychrun (Ranked No. 4) for the second spot behind consensus top pick Auston Matthews (Ranked No. 1), while Puljujarvi leapfrogs three Canadian Hockey League stars into third. Chychrun produced an above-average postseason for Sarnia, but his play for Team Canada at the aforementioned U18’s in Grand Forks was inconsistent. That doesn’t mean he’s no longer the best defenseman for the draft — he is, and has done enough to remain in that position right up to draft day.

London’s dynamite draft-eligible duo of LW Matt Tkachuk (Ranked No. 5) and LHD Olli Juolevi (Ranked No. 9) remain critical to their team’s march towards the Memorial Cup — they lead the Erie Otters 3-0 in their semifinal series at press time. Getting to the OHL finals would also guarantee a LW Max Jones (Ranked No. 22) return for the Knights, as the power wing has missed most of the playoffs from a suspension for a dirty hit in the opening round. We don’t think the Jones hit will impact his draft stock, but we can’t say the same about all the prospects from Russia’s under-18 program who were banned from the world championship for universally testing positive for a banned substance. Center German Rubtsov (Ranked No. 17) remains the best Russia has to offer for 2016, but we no longer see him cracking the top 10 after witnessing fellow pivots Clayton Keller (pictured) and Canada’s Tyson Jost shred the competition at the U18’s. Elsewhere, OHL prospects and Mississauga linemates RW Alex Nylander (Ranked No. 7) and C Mike McLeod (Ranked No. 10) each shook off slow starts to pile up the points at the recent U18, while blueliners RHD Dante Fabbro (Ranked No. 18), RHD David Quenneville (Ranked No. 90) and RHD Adam Fox (Ranked No. 27) outperformed the significant majority of their peers.

Team USA center Clayton Keller (Ranked No. 8) had as good a season as any draft-eligible player can have, especially when you consider he’s less than two months away from being eligible for next year’s draft. He’s dominated everyone — the NCAA, the USHL and most certainly the international stage, reaching the century mark in points thanks to his output in Grand Forks. Smart, shifty, quick and dynamic, Keller is a true leader who exemplifies what a top-line center should be.

Keller and Team USA teammate RHD Adam Fox (Ranked No. 27) looked like hockey’s version of Magic Johnson and Stephen Curry sharing the same backcourt. The duo dazzled with spins and weaves while dipsy-doodling their way to the all-tournament team. Fox has been his club’s top defender for quite some time, and we think it would be criminal if the Harvard-bound blueliner doesn’t get his name called within the top 30 picks.

If the London Knights are a menacing machine, then center Cliff Pu (Ranked No. 88) is the engine. A speedy two-way pivot slowly filling into his 6’1 frame, Pu has top-six potential and at times has carried the Knights with clutch scoring, do-or-die effort on the penalty kill and an excellent approach to the game. And speaking of effort, ain’t it something that Canada’s best defenseman at the U18’s wasn’t named Chychrun, Fabbro or Logan Stanley? The distinction belonged to Medicine Hat powder keg RHD David Quenneville (Ranked No. 90), an undersized puck mover with tremendous upper-body strength and an absolute cannon for a shot. But he’s far from just a “fire-and-forget” point man; Quenneville is patient with the puck and uses his shot when it makes the most sense.

Kelowna center/wing Dillon Dube (No. 36) had a fine postseason a year ago, but this season he’s been an obvious passenger. Granted, the Rockets are a deep, experienced team getting subpar performances from several top guns, but it’s time for Dube’s fire and hustle to start translating onto the scoresheet. His timing seems a bit off, and his shots are clearly telegraphed.

Czech defender LHD Lukas Doudera (Ranked No. 118) has all the tools to become a point-producing rearguard, and his play in the junior league is why we cling to our preseason belief that there’s something there. But his play on the international stage has been terrible, and he was nothing more than an anchor for poor Libor Hajek to carry while on the top pairing in Grand Forks. Doudera’s loves to drift towards who-knows-where, and he’s shown no interest in getting his body in front of the puck or the man. Some might say it’s just one tournament, but it’s not — he’s been trending down since the winter.

Over in the QMJHL, we’re finally starting to sour on project power center Liam Murphy (No. 212), who has done next to nothing since Christmas and was a healthy scratch for a handful of playoff games. He was never a go-to guy for Moncton, but the promise the Connecticut native displayed early in the season is but a distant memory.

Below is a sortable table of The Draft Analyst’s April rankings of draft-eligible prospects. Players born between 01 January 1996 and 15 September 1997 are considered “overage” draft candidates who were once eligible for either the 1996 and/or the 1997 NHL Draft, and are identified in this list with an “OA” following their full name.