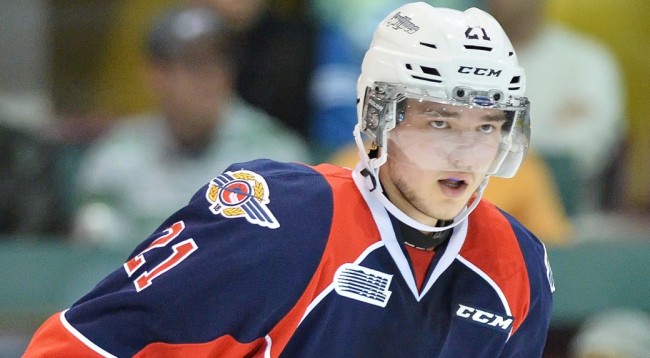 Position: Center
Shoots: Left
Height/Weight: 6’6 218 lbs
Born: March 5, 1998, Chesterfield, MO
Obtained: Traded by Niagara to Windsor for Guelph’s 2nd round pick in 2015, Windsor’s 2nd round pick in 2017, Guelph’s 2nd round pick in 2018, Kitchener’s 3rd round pick in 2016, Windsor’s 3rd round pick in 2018 and Windsor’s 14th round pick in 2017…Selected in the 1st round (6th overall) by Niagara in the 2014 OHL Priority Selection
Notes: 2015-16: Finished fourth in tournament scoring with three goals and nine assists for 12 points as Team USA won the bronze medal at the 2016 IIHF under-18 world championship…Ranked first on the team in assists (53) and second in points (74)…His goals-per-game average increased from 0.18 percent through his first 34 games, to 0.62 over the next 21…Won 53 percent of his faceoffs (609-for-1138)…Named OHL Player of the Week on February 28th…Scored a goal for Team Cherry at the 2016 CHL Top Prospects Game…Recorded a goal and an assist for Team Plante at the 2015 USA Hockey All-American Prospects Game…2014-15: Named to OHL Second All-Rookie Team after finishing fifth in rookie scoring with 43 points in 56 games…Named OHL Rookie of the Month for March, 2015…Tallied a pair of goals and two assists in five games for Team Canada-Red at the 2015 World U17 Hockey Challenge…Drafted by the Indiana Ice in the 24th round (236th overall) in the 2013 USHL Futures Draft…

Massive playmaking two-way center with a lethal shot who’s been centering Windsor’s top line all season. The son of Ottawa 67’s head coach Jeff Brown — a former all-star defensemen in the NHL — Logan is a physical specimen indeed, using a massive wingspan and strength to win his puck battles and transition quickly to offense. He can be a joy to watch, using above-average speed but a powerful long stride and reach to protect the puck off the rush. He’s an excellent passer, blessed with a sixth sense to anticipate and dissect the defensive scheme presented to him. Brown owns a very heavy shot — one of the draft’s best among forwards — which he can fire with accuracy off the pass via a quick release. He was a bit pass-happy the first few months of the season, but his coachability and dedication towards refining his all-around game resulted in a goal-scoring explosion since January.

Brown has a nose for the net and rarely takes a low-percentage shot. And if he does, it’s likely to create a rebound or make a goalie work hard for what would normally be an effortless save. When he’s on his game, he’s rarely guilty of puck gazing in the offensive zone, constantly moving his feet and keeping his head up for openings, or the possibility of an opening. And while Brown plays the finesse game at a high level, he has no problem crashing the net for a loose puck, or positioning himself in the trenches for a deflection. He’s got a selfless sense about him and comes across as a mature kid who was raised and trained right. You’d love to see him play with fire on a consistent basis, and we get a sense that he should be far more dominant than his numbers indicate. Nevertheless, he has top-line center upside and isn’t too far from making his NHL debut.