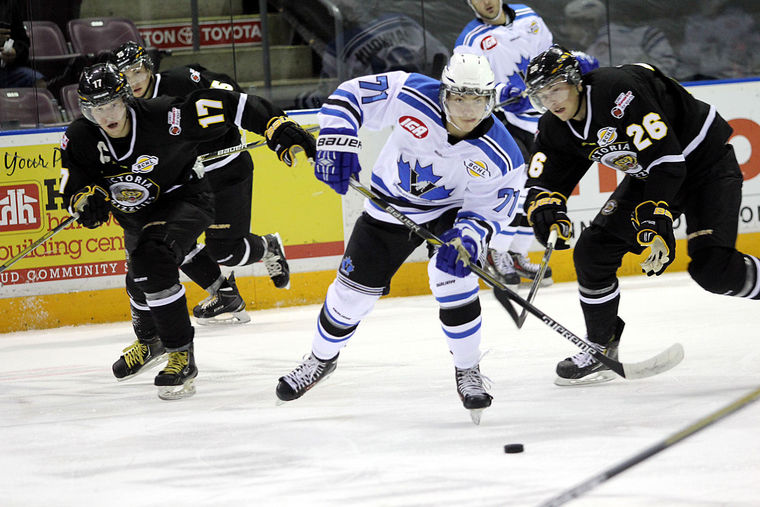 Position: Center/Left Wing
Shoots: Left
Height/Weight: 6’0 190 lbs
Born: March 17th, 1998, Kelowna, BC
Obtained: Committed to Penticton (BCHL) on May 28th, 2014…Committed to the University of North Dakota (NCAA) on August 17th, 2015… Drafted in the first round (7th overall) by the Everett Silvertips in the 2013 WHL Bantam Draft.
Notes: 2015-16: Led the 2016 IIHF under-18 world championship in scoring with 15 points in seven games to break Connor McDavid’s record for most points in one tournament for Team Canada…Named 2015-16 BCHL Most Valuable Player, becoming youngest player in league to do so since Kyle Turris in 2007…Led the BCHL in assists (62), points per game (2.17) and finished third in the league in scoring with 104 points…Named MVP of 2015 World Junior “A” Challenge after he led Team Canada West to the gold medal, leading the tournament in scoring with nine points in four games…Played for Team West in 2016 BCHL Top Prospects Game…Registered three goals and an assist in five games for Team Canada as they won the 2015 U18 Ivan Hlinka Memorial Cup… 2014-15: Named to BCHL All-Rookie Team after registering 45 points in 46 games…Tallied 10 goals in 21 playoff games to help Pentiction win the BCHL championship…Had two goals and an assist for Team Canada West at the 2015 World Junior “A” Challenge…Had two goals and six assists in three games for Team Gold at the 2014 World U17 Hockey Challenge.

We consider the North Dakota-bound Jost a deceptive prospect, and it had nothing to do with playing in the less-visible BCHL. He is a star on the ice without question, and nobody can deny his high standing as one of the draft’s super-skilled puck wizards. So what keeps him off the radar? Well, we’re talking about on the ice, people. And lets just say his opponents have trouble dealing with his elite anticipation skills and prodigious instincts on a nightly basis. Jost is a shark, appearing out of nowhere with speed and tenacity to ruin the breakout play a coach worked on for weeks. Once the puck is on his stick is where his artistry comes to the forefront, as he protects it with his head up while travelling at a high rate of speed before shifting down a gear, curling and weaving in and around the offensive zone for as long as he has to. His coach can convey simple marching orders to his players when it’s Jost’s turn on the ice — Get open…he’ll find you.

Jost has an excellent shot to compliment his extraordinary passing acumen, using soft hands and a quick release to turn a bad pass in his skates into a well-placed attempt at the net. Jost’s shot accuracy is top notch, and he will beat you from the inside of the ice or outside from his arsenal of moves. He is a three-zone center with decent size who will not necessarily avoid physical play, and he’s shown to control the puck while taking a beating.