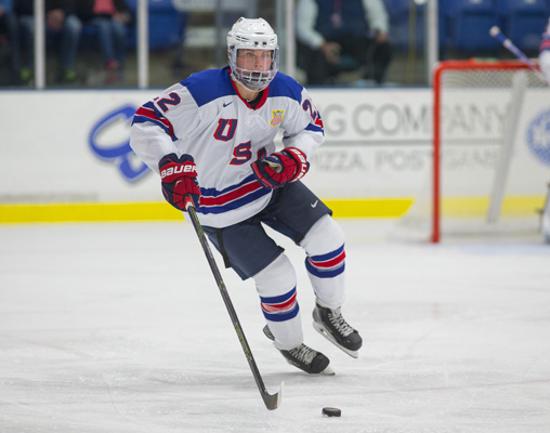 Position: Left Wing
Shoots: Left
Height/Weight: 6’0 195 lbs
Born: December 4th, 1997, Edina, MN
Obtained: Joined the NTDP’s Under-18 team on June 9th, 2015…Committed to Boston University (Hockey East) for the 2016-17 season…Drafted in the first round (13th overall) by the Sioux Falls Stampede in the 2014 USHL Futures Draft.
Notes: 2015-16: Led the under-18 team in goals (50), power play goals (12), game-winning goals (9) and Penalty Minutes (101) in 62 games…Tallied at least one goal in six of seven games for Team USA at the 2016 IIHF under-18 world championship…Scored two goals and added an assist in four games for Team USA at the February U18 Five Nations Tournament in Rauma, Finland…Was invited to attend Team USA’s selection camp for the 2016 World Junior Championship…Recorded two goals, five assists and a team-best 28 shots for Team USA at the November U18 Five Nations Tournament in Monthey, Switzerland…Scored a goal for Team Plante at the 2015 CCM/USA Hockey All-American Prospects Game…2014-15: Named USHL Rookie of the Year and All-USHL Third All-Star Team after tallying a team-high 33 goals for Sioux Falls…His 33 goals set a USHL single-season record for 16 year olds…Scored nine goals (four GWG) in 12 playoff games as the Stampede won the USHL Clark Cup…Scored two goals and added three assists in four games for Team USA’s Under-17 squad as they took home the silver medal at the Five Nations Tournament in Crimmitschau, Germany…Father is former NHL all-star forward Brian Bellows, who played 10 seasons with the Minnesota North Stars.

Bellows is a well-built goal scorer with a low center of gravity who can play a punishing, heavy yet cerebral game. He’s a good skater with tremendous balance and moves well laterally. And while he used play center for Edina’s powerhouse high school program, Bellows is most certainly better suited as a shooter from the flank. He’s built like a Mack truck and plays with fire, using tremendous athleticism and work ethic to maintain his compete level, even during extended shifts. He’s extremely difficult to move off the puck, and he’s proven to be a load to handle for some of the NCAA’s bigger defensemen. Bellows is a hard, accurate passer, but can also feather a pass off the rush or lead his teammates with timing and precision.

Bellows’ approach towards every shift is to keep himself involved at all times in order to acquire the puck, using his physical gifts and wide frame to protect it as he maneuvers towards the net. Take our word for it – if a defender is nervous going back for the puck, Bellows will sniff it out and exploit that fear. He plays an aggressive, sometimes stubborn game, often too much for his own good. Getting whistled for bad penalties is a habit he’s had since high school, and fixing that should be a training objective when he plays for Boston University next season. When he keeps his emotions in check, however, he can be an unstoppable force.