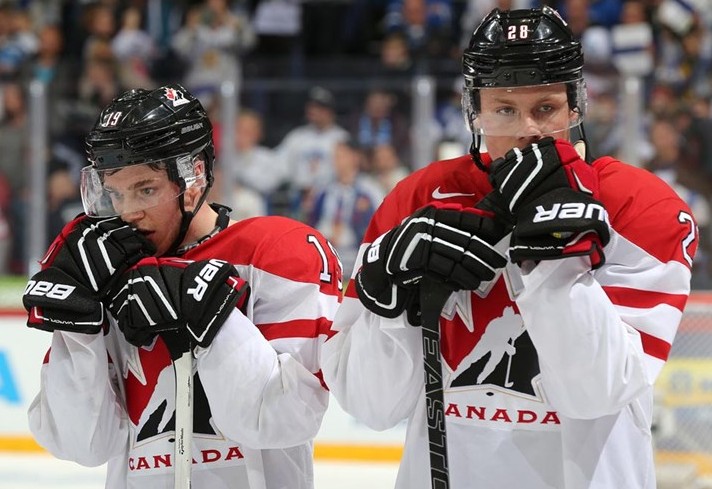 New York (The Draft Analyst) — Sixth place. That was the best Team Canada could do at the world junior hockey championship, which ended for them on Sunday following a crushing 6-5 loss to host Finland. To their credit, the young men who experienced a tidal wave of emotion in such a short period of time made no excuses about what transpired. An entire nation’s worth of fans sat and stood glued to their televisions and smart phones, hoping the boys in red and white would pull out a dramatic win or defining moment that simply never happened.

Their team, chock-full of first round draft picks and future stars, were not hastily assembled. They were meticulously selected, carefully nurtured by a developmental machine that churned out a WJC championship on its own turf the year prior. But that same roster, the one Canadians clamored and begged for, revealed weaknesses they never expected to see in the preliminary round of a tournament they generally dominate. Weaknesses, which led to mental breakdowns, miscalculations and misjudgments — all at inopportune times.

The byproduct? A quick hook off the mound in the top of the fourth inning and a beeline for the showers. So there will be no gold medal moment. No rally or victory speech. There will be no commemorative plaques to order on TV. No ornate carvings courtesy of Canadian Tire.

Team Canada won’t be hockey’s world junior champions for the sixth time in seven years, beaten again by teams like the United States, Sweden and Finland. They didn’t win, not because half their stars were donning NHL uniforms. And certainly not because the game they invented and perfected was criminally replicated by those swift-skating copycats from across the pond. The Canadians failed in Helsinki because they were beaten by deeper, balanced teams who simply wanted it more. Moreover, those very teams had beaten them before; a fact that seemed to have gotten lost in all the pro-Canada rhetoric which grew more raucous as the competition neared.

What happened to the Canadians in Finland is far from a debacle. There was no choke job to lament, no player or coach to point the finger at. There wasn’t even a signature turning point to wargame in retrospect. And when the brain trust of Hockey Canada convene to conduct what we should all assume to be a very lengthy after-action review, they’re going to come up with bupkis.

Team Canada went 2-3 in this year’s tournament, and each of the three nations that beat them in Helsinki had done so in previous competitions. The United States squad, for example, came to Finland with players who had already beaten the snot out of Canadian entries in events like the 2014 World Under-17 Hockey Challenge and the 2015 Under-18 World Championship. In the 2014 U17’s, an American squad led by Auston Matthews, Matt Tkachuk, Zach Werenski and Colin White — all 2016 WJC’ers — obliterated an Ontario-based team with the likes of Mitch Marner, Dylan Strome, Travis Konecny, Lawson Crouse and Mitchell Stephens. Less than a year later, a similar roster for Team USA beat Canada in the U18 World Championship semifinals, where Stephens, Mathew Barzal, Thomas Chabot, and Anthony Beauvillier were on the wrong end of a 7-2 shellacking.

And it was Finland in 2014 which eliminated Canada’s quest for its first WJC gold medal in five years — a 5-1 thrashing in Malmo, Sweden. That same year, 11 players from Canada’s most recent WJC roster had to settle for the bronze at the U18’s in Finland after losing to the Czech Republic in the semifinals.

As much as we’d like to rationalize Team Canada’s poor tournament into some knee-jerk “We taught them how to play” excuse, the disappointment in Helsinki had way more to do with one team (Canada) not being as good as the teams they had been gut punching for almost two decades, if not longer. And it’s not like Finland’s coaching staff had some Come-to-Jesus moment and studied a 2006 Team Canada playbook a few weeks before the tournament. Up until a few years ago, the pre-tournament talk in Europe and the United States seemed to focus on how to survive against Canada in such a short series of games rather than beat them at their own, fast-paced game. Nowadays, they’re all jostling to see which team gets to be the first to bellow their national anthems with teary-eyed Canadian teens looking on in dismay.

The hunters became the hunted. And it’s been that way for a while.

Canada may have dropped a close game to Finland, but it surprisingly took this specific tournament for the quality of Finland’s roster to receive attention from the North American mainstream media. Right wings Jesse Puljujarvi and Patrik Laine, a duo playing on the same line for the sake of the tournament, have been shredding international competition for several years. Matthews, an Arizona kid who’s been considered to be THE top player for the 2016 draft for several years, is almost guaranteed to go first overall, while Tkachuk — his Team USA linemate (and current London Knight) — is earmarked for the top five. Throw in Swedish wunderkind Alexander Nylander and Finnish offensive defenseman Olli Juolevi, and the possibility that the draft’s first five or six picks will be as Canadian as Vladislav Tretiak is unequivocally discernible. Now think about that when you’re constructing your version of the 2017 Team Canada roster.

There are those in Canada, and possibly elsewhere, who feel that Hockey Canada remains the gold standard in player development and international competition (this writer being one of them). But the chunk of the pie they get to eat isn’t as big as it used to be. The marginal results earned in Finland weren’t born out of overconfidence or a toxic air of invincibility. These kids were the best that Canada had to offer, and the message that other teams can handily beat them at their own game needs to be drilled home to everyone.