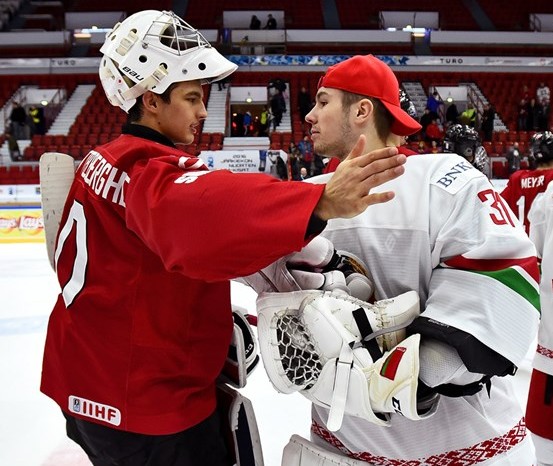 New York (The Draft Analyst) — Pius Suter had a natural hat trick and Denis Malgin chipped in three assists as Switzerland beat Belarus 6-2 on Sunday to win the relegation round of the world junior hockey championship from Helsinki.

Switzerland (2-3-1) is now qualified to participate among the world’s top 10 teams in next year’s competition, which will be held in Montreal and Toronto. Belarus (0-6) will compete in a lower division, replaced by Latvia in group play for next year.

Suter, who returned to Switzerland after he played two seasons with the Guelph Storm of the Ontario Hockey League, scored his first two goals just nine seconds apart early in the first period to give the Swiss a 2-0 lead. He converted a rebound on a power play at 3:41, then rushed down the wing and beat Belorussian goalie Ivan Kulbakov ay 3:50 for his second of the game. He completed his three-goal game with 7:17 left in the first, and his first two tallies tied a record set by former NHL star Dave Gagner in 1983 for the fastest two goals scored by the same player.

Malgin, a fourth round pick of the Florida Panthers in 2015, finished the tournament as the team’s leading scorer in both assists (8) and points (9). He has 16 points in 12 career tournament games.

Belarus staged a short rally late in the first period. Dmitri Buinitski got the Belorussians on the board with 4:40 left, and Dmitri Filippovich made it 3-2 84 seconds later when he beat Swiss netminder Joren van Pottelberghe with a shot over his glove during a power play.

Noah Rod, a San Jose Sharks prospect, restored Switzerland’s two-goal lead with a power play goal at 8:18 of the second period. It was Rod’s fourth goal of the tournament. Calvin Thurkauf and Dario Meyer added scores of their own to close out the scoring for the Swiss, who outshot the Belorussians 44-23.

Van Pottelberghe made 21 saves to pick up the win. Kulbakov stopped 39 of 44 shots in defeat.