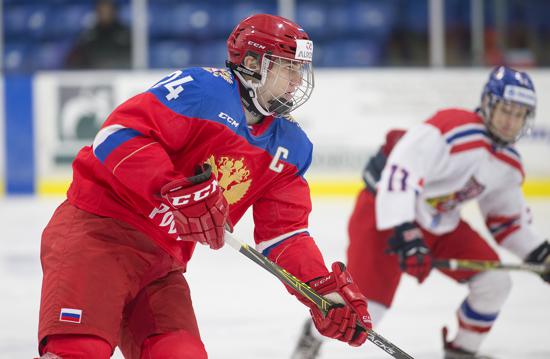 Russian power forward Klim Kostin is one of several game-breaking talents expected to go high in the first round,

The Draft Analyst (New York) — Nolan Patrick finished his intriguing draft year right where he started it — at the very top of one of the thinnest crops in several years. The power center may have spent the majority of the season on the disabled list with lower-body injuries, but a solid showing at the recent scouting combine plus a full offseason of rehab is enough to quell the doubts I had following a season-ending leg injury back in March. However, Patrick being limited to just 33 games in the most important year of his young career justifiably gave detractors a foundation to stand on. Make no mistake — the list of first overall picks who missed half a season from injury is both short and disconcerting. Only three former top picks  — Gold Kluzak in 1982, Patrik Stefan on 1999 and Nail Yakupov in 2012 — appeared in less than 43 games in their first year of draft eligibility, and all three are remembered more for what they didn’t accomplish rather than what they did. Nevertheless, a healthy Patrick is next to unstoppable, and his combination of power and skill from the center ice position is unmatched in this specific draft year.

Casey Mittelstadt, the skilled Minnesota-raised center who bookended a dominant season with Eden Prairie High by crushing USHL competition to a tune of a league-best 1.25 points per game, comes a close second to Patrick in terms of skill and NHL upside.  Poor upper-body strength results at the recent combine notwithstanding, Mittelstadt is capable of logging massive minutes, shouldering top-line center responsibilities and producing no matter how much attention he gets from opposing coaches. Swiss star Nico Hischier of the Halifax Mooseheads in the Quebec League is both smart and skilled enough to go first overall, as he led all CHL rookies in scoring and carried a thin roster to the postseason. Playing center with a wiry frame is perfectly normal in major junior, but Hischier will need to fill out before competing and succeeding against the bigger pivots in the NHL.

The biggest riser in the first round is a kid who continued to prove me wrong all season. It may seem as though sublime defender Cale Makar from the Brooks Bandits is simply a flavor-of-the-month kind of prospect because of the way he crushed a lesser-known league like the Alberta Junior Hockey League. It took a while, but I finally realized that questioning the level his competition, or his choosing to attend UMass-Amherst over bigger, tougher NCAA programs, is nitpicking at its finest. The mature Makar was next to unstoppable at both the World Junior “A” Challenge and the RBC Cup — two competitions that featured dozens upon dozens of international and NCAA-bound talent. You don’t find many NHL stars who in their draft year played in a league like the AJHL. But times are changing, and the Big Leagues are desperately promoting speed and skill, two things Makar has in spades.

Klim Kostin was a favorite player of mine in the preseason, but his draft year was as incomplete as they come. He followed up a dominant Ivan Hlinka tournament with a promotion to the KHL — a rarity for pre-draft teenagers. Stuck in a depth role that saw him play under 10 minutes a game, Kostin was demoted to a lower league before shutting his season down with a shoulder injury. His international resume and recent combine exploits, however, are enough to vault him back into the Top 10, which could tell you more about the depth of the 2017 crop than it does for Kostin’s skill and NHL upside.

The rankings I began compiling as far back as August are not intended to be a blueprint for how the draft unfolds when it begins in Chicago on June 23rd. That what mock drafts are for, and click here for the 7-round bad boy I completed earlier in the month. My rankings are based on NHL potential, and how well a player’s skill set may or may not translate at the next level. Lack of foot speed, for example, is a cause for concern, as a player needs to be patient, smart and skilled to make up for deficiencies in straight-line speed and first-step quickness. That’s why an uber-talented pivot like Gabe Vilardi is ranked quite high for a player with average speed — he can beat you in a variety of ways and his patience on the rush works to his teammates advantage.

Lastly, my previous rankings from May included close to 50 first-year eligible goaltenders, who now are ranked on a standalone list. So most of the rankings jumps are a byproduct of removing the goalies rather than from a player’s merits.

Keep an eye on:

RW Lane Zablocki (Red Deer, WHL): Power winger who plays with an edge but has the puck skills to keep opponents honest in any zone. Flourished with expanded role following a trade from Regina to Red Deer.

LHD Max Gildon (U.S. U18, NTDP): It wasn’t just the hat trick against the Czechs at the U18 worlds that earned this big Texan a bump. He reinvented himself as a three-zone defender as early as the February Five Nations tournament. His speed and size make him a legit first-round candidate.

RW Lukas Boka (Windsor, OHL): Playing a depth role on a Memorial Cup winner is never a bad thing, but Boka is a possession driver who made the most of his minutes. He’s a excellent penalty killer who likes to throw his weight around.

LHD Daniel Andersen (Linkopings J20, Superelit): The top defender and captain for Denmark at the U18 D1A World Championship is a smooth-skating power play quarterback. Think of him as a poor man’s Erik Brannstrom.

C Nolan Walker (Sioux Falls, USHL): Playmaking Alaskan roadrunner from Culver Academy who played well in a brief stint with Sioux Falls. He switched NCAA commitments from Alaska-Anchorage to St. Cloud State, where he figures to play a prominent role.

RHD Scooter Brickey (Des Moines, USHL): One of the draft’s best one-on-one defenders who seemed to solidify any pairing he played on. Seemed to get better, more confident as season progressed. Headed to Western Michigan in the fall.

C Brett Stapley (Vernon, BCHL): A two-way center with soft hands and can play in the trenches. Stapley recently committed to the University of Denver.

Below is a detailed sortable table of The Draft Analyst’s final rankings of first-year, draft-eligible prospects for the 2017 NHL Entry Draft, to be held in Chicago from 23-24 June. Players born between 16 September 1998 and 15 September 1999 were considered in the zone for first-year eligibility.

*Height and weight measurements of top prospects recorded by Mark Scheig can he found here. Give him a follow on Twitter @THWMark