*Excerpts from this post were previously published in the Sporting News on Friday, April 5.

NASHVILLE (The Draft Analyst) — Identifying the best prospects for the 2019 NHL Draft, or any draft for that matter, is a process that teams devote a lot of time, money and effort to. And while cultivating and crafting an internal draft board can be a round-the-clock process that requires a significant amount of time, money and effort, it’s at the end-point of the regular season, and the subsequent lottery drawing — scheduled for Tuesday, April 9 — that kicks a scouting department’s “second season” into high gear.

Normally, efforts in ranking prospects are considered to be slightly more difficult for teams drafting outside the first or second pick, mainly because the kids earmarked in the preseason for the top two slots usually end up there on draft day. The same should ring true this year, as record-setting seasons from both American-born center Jack Hughes and Finnish sniper Kaapo Kakko — two neophytes designated as top-pick candidates for several years — have created a sizable gap between them and the rest of the elites for 2019. That doesn’t necessarily mean there isn’t work too be done for teams picking first or second overall, as deciding on a consensus top pick still entails sleeve rolling and behind-the-scenes work, albeit without as much wargaming as is conducted by the teams picking immediately after them. 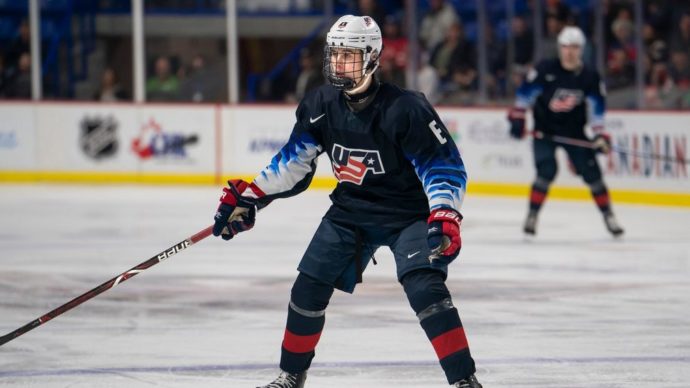 The good news for teams losing out on the Hughes-Kakko derby comes in the form of the deepest group of forward prospects since the vaunted 2015 draft that produced Connor McDavid, Jack Eichel, Sebastian Aho, Mitch Marner, Mathew Barzal and Mikko Rantanen. But as is the case with every draft in every major sport, the top players to come out of any draft are never selected in sequential order. Barzal was taken 16th overall, and Aho wasn’t even a first rounder. Mistakes likely are going to be made this year as well, but the kids who most expect to immediately follow Hughes and Kakko on the draft board not only display cornerstone potential, but have yet to reveal any noticeable red flags that may hurt their stock.

As dynamic a player as Hughes may be, one cannot overlook the fact that he has had the benefit of playing alongside two potential top-five picks in Trevor Zegras and Alex Turcotte. Both are natural centers who are sturdy on their skates and can do remarkable things with the puck, and Zegras has spent most of the season on Hughes’ left flank. Turcotte is a bit more responsible defensively, but Zegras has jaw-dropping vision and playmaking ability similar to Barzal, or even Hughes himself. While Hughes was out with an ankle injury in February, Zegras led the Five Nations tournament in scoring as Team USA’s top center. The debate between whether Turcotte or Zegras is the better prospect has been going on for quite some time, and may continue right up to draft day. For now, we’ll give the Boston University-bound Zegras the slightest of edges because of his Hughes-esque dynamism.

Neither Turcotte nor Zegras, however, should be considered guarantees for the top five. That’s because of the trio of Western Hockey League centers who also can provide a lottery team with top-line center potential. Saskatoon’s Kirby Dach is an exceptional set-up man with size who reads plays as well as anyone and competes hard every shift. Kootenay’s Peyton Krebs gives off a Bo Horvat kind of vibe thanks to his leadership, vision and ability to carry a thin roster. Lastly but certainly not least is Lethbridge power forward Dylan Cozens, a versatile player who scores in the clutch and has an infectious attitude as a team leader. Cozens can impact the game in a variety of ways, to include playing the wing as a sniper. For that reason alone, we think he’ll be the first of the three to don an NHL jersey on the draft stage. 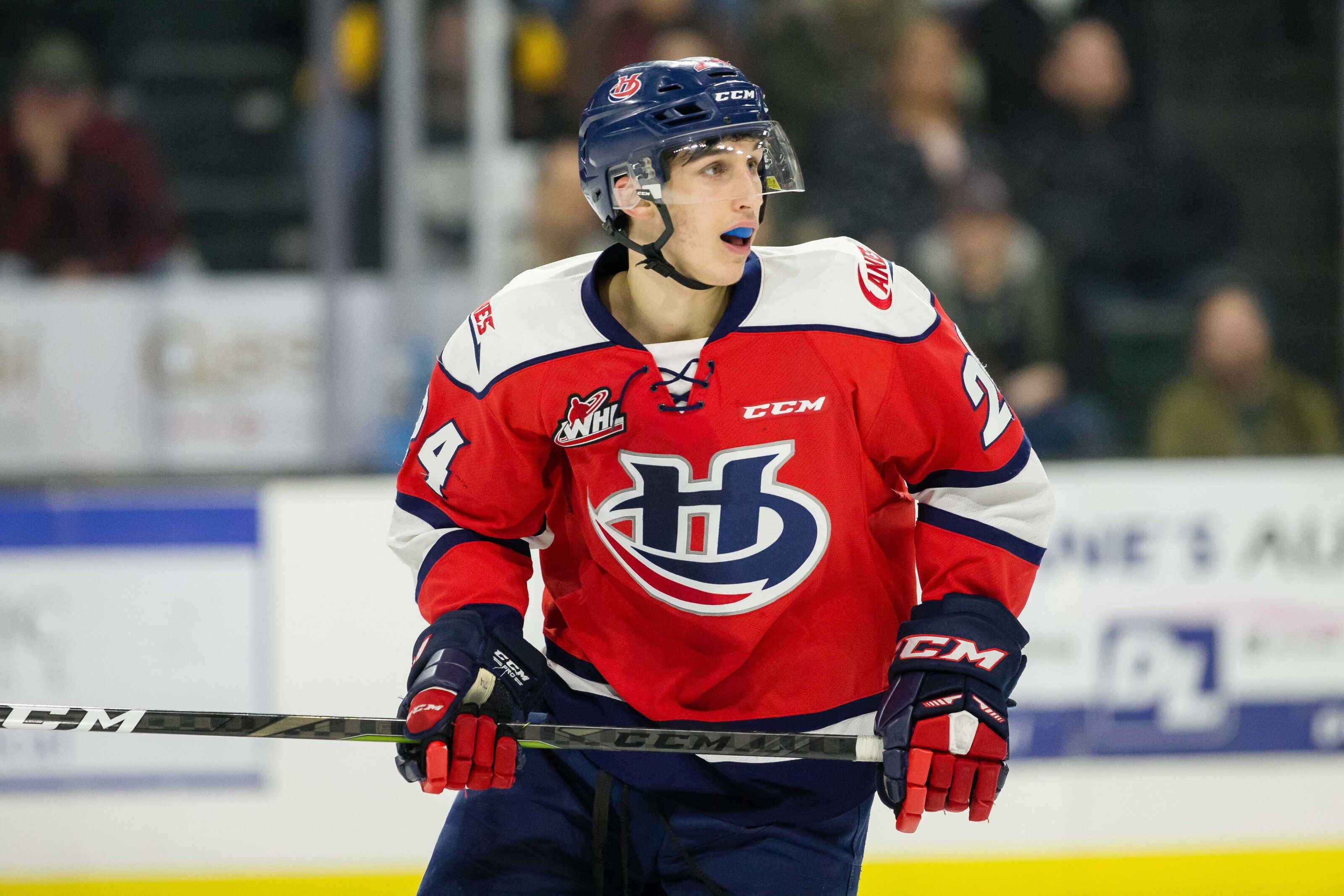 Although Kakko has done more than enough to isolate himself as the best winger in the draft, there are a handful of prospects who should be viewed as potential all-star alternatives. Russian Vasily Podkolzin’s abrasive, in-your-face style while proving daggers on offense has collectively endeared him to the NHL’s scouting community. His combined numbers against his age group at both the international level and in the Russian MHL (31 points in 35 games) may be getting overlooked, possibly because he earned a rare promotion to the adult-age second division and did not produce points consistently. Still, Podkolzin could be the first Russian-league prospect to go in the top five since Alex Ovechkin and Evgeny Malkin went 1-2 in 2004.

Much like Podkolzin, Team USA’s Matthew Boldy is an exceptional 200-foot player who sacrifices points in favor of proper positioning and consistently covering up for his risk-taking defensemen. A Boston College recruit, Boldy has a mature frame, powerful stride and excellent shot. He not only possesses one of the highest hockey IQ’s of any draft prospect, but comes across as a Patrice Bergeron type who could provide perennial Selke-caliber play.

One of the more excitable players that will be available in June is another one of Jack Hughes’ teammates with the NTDP. Cole Caufield may be listed at 5-7, but his deadly shot-release combination is one of the most intimidating skills on any draft prospect. With back-to-back 54-goal seasons, the future Wisconsin Badger passed Phil Kessel for the most career goals in NTDP history, and needs two more to beat Auston Matthews’ single-season mark of 55.

Bottom-dwelling teams looking for a franchise-changing defense prospect picked the wrong year to have such an important requirement, so keep an eye on stud puck mover Bowen Byram out of the WHL’s Vancouver Giants to leapfrog one or more of the notable forwards. He is head and shoulders above the rest of his draft-eligible peers, and for good reason. Unlike last year, where four blueliners were picked in the top 10, Byram should be the lone rearguard within the top tier. With 26 goals to best all WHL defenders, he easily was one of the league’s top defenseman, let alone amongst his own age group.

Nonetheless, it’s simply not a banner year for defense prospects at the draft. Although Team USA’s Cam York is an excellent skater who rivals Byram’s point-producing proclivity, he and the rest of the draft-eligible puck rushers from North America cannot impact the game defensively the way Byram can. The bulk of the quality defensemen taken in the first round should come from Europe, where Swedes Victor Soderstrom and Philip Broberg, Finland’s pair of swift playmakers in Ville Heinola and Anttoni Honka, and Germany’s Moritz Seider, represent the best the cross-pond leagues have to offer. One wildcard to crack the top 15 of the first round is Mississauga puck mover Thomas Harley, a graceful skater with good size and a consistent tape-to-tape passer.

Thomas Harley is a cerebral offensive defenseman who was eighth among OHL rearguards with 58 points in 68 games (Photo: Getty Images)

Every year, NHL general managers picking inside the top 20 have to address the annual question of how high are they willing to go to draft a goalie. Much like drafting kickers in fantasy football, it appears as if teams are beyond reluctant to cash in their goalie chips within Round 1. Since 2013, only two netminders — Ilya Samsonov in 2015 and Jake Oettinger in 2017 — were picked in the first round, and both were selected after 20. The last goalie to go earlier than that was Andrei Vasilevskiy, who went 19th overall in 2012 and is one of the best in the business.

This year’s goalie pool is headlined by Team USA’s Spencer Knight, a Boston College recruit who has drawn comparisons to Henrik Lundqvist and Carey Price; the latter being the last backstop to go top 10 in the draft some 14 years ago. Although Knight checks too many blocks to ignore, it’s doubtful he goes ahead of any of the aforementioned forward prospects, even with expansion looming and the decline in quality goaltending at the NHL level. Still, this is an excellent draft for goalies, as Peterborough’s Hunter Jones represents the best the OHL has to offer. Out west, the WHL has a number of blue-chip backstops in Medicine Hat’s 6-7 import Mads Sogaard, Prince George’s Taylor Gauthier, Everett’s Dustin Wolf and Vancouver’s Trent Miner. And keep an eye on the ever-steady Isaiah Saville, who is a brick wall for the USHL’s Lincoln Stars. 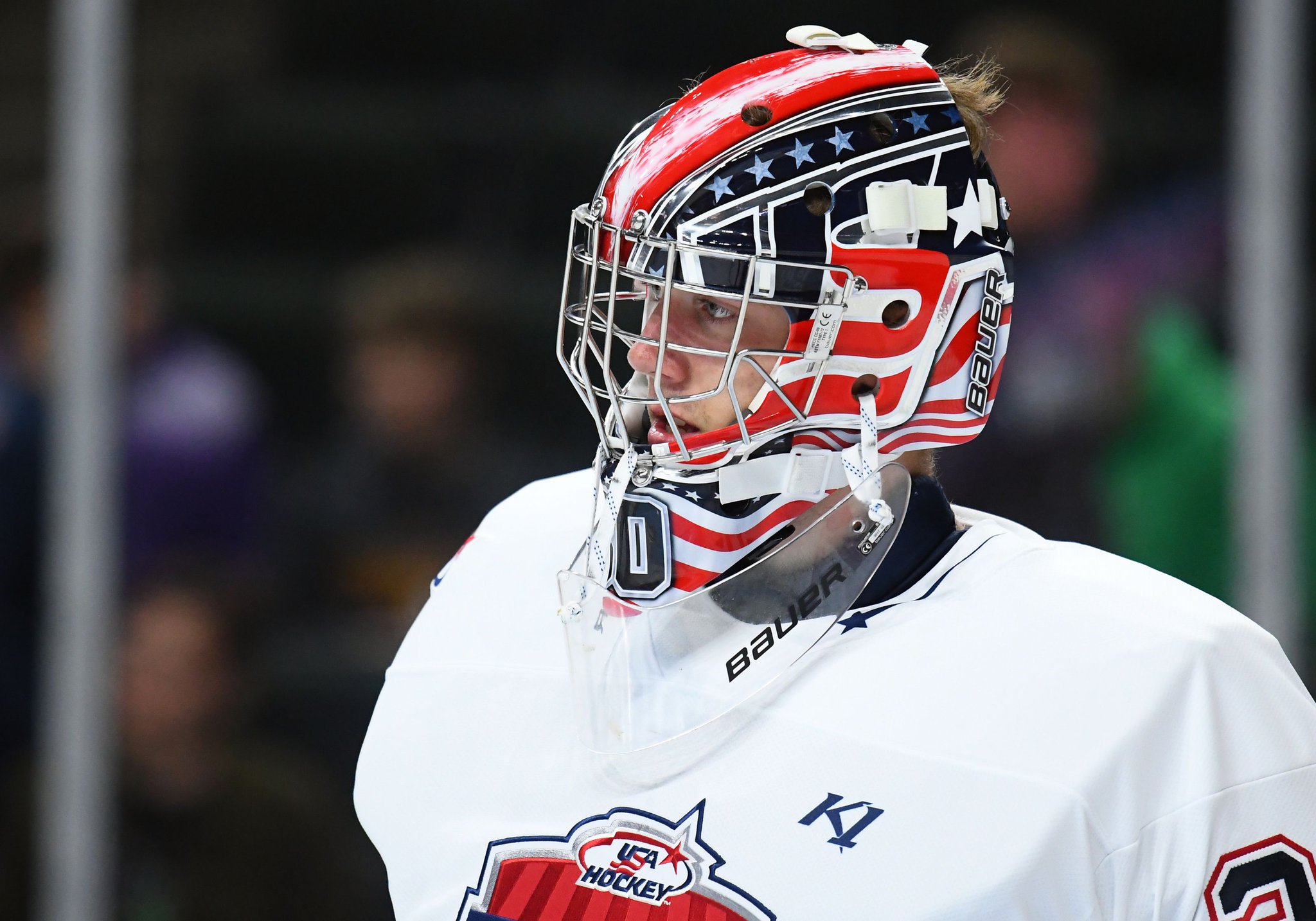 Connecticut native Spencer Knight from Team USA’s under-18 program is considered by many to be the best goaltending prospect since Carey Price (Photo: Getty Images)

Below is a list of first-year eligible draft prospects for the 2019 NHL Entry Draft. This ranking of 500 prospects precedes the Top-500 final ranking that will be released in June before the NHL Draft. Players born between September 16, 2000 and September 15, 2001 are in the zone for consideration.