Barys Astana’s Valeri Orekhov is the one of the KHL’s top young defenseman and led Kazakhstan to a relegation-round win over Denmark at last month’s under-20 world junior championship. 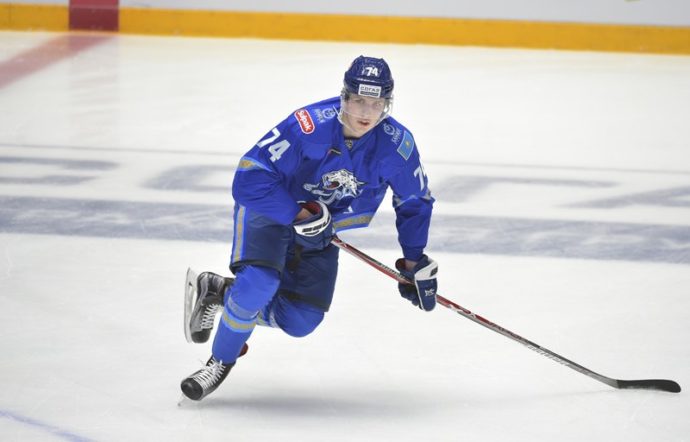 NASHVILLE (The Draft Analyst)— If at first you don’t succeed, try, try again. At least that’s the message NHL teams want to send teenagers previously passed over at the NHL draft. For prospects who went undrafted in their first year of eligibility, the path to the world’s foremost hockey league begins to curve, maybe with a pothole or detour thrown in for good measure. Some say the experience of going to a draft and not hearing their name called is beyond humbling for a prospect, one they use as motivation to improve facets of their game that may make them more attractive in the eyes of scouts. For others, the likelihood of getting drafted in Year One was slim to begin with, and their focus on becoming a well-rounded player is not clouded by the prospect of whether or not they get picked.

On average, teams generally wait until the later rounds to draft an overager. You can count on anywhere from 40 to 50 re-entries to get selected in a given draft year, and that trend should continue this year. Why? Well, for starters, a team’s general manager and scouting director may be in agreement that at least one pick should be a mature overager, either from North America or Europe, or both. These types of prospects can appeal to team builders for a variety of reasons, such an improvement during an extra year or development, physical growth and valued experience playing against adult competition in a college or elite league.

All that said, there are legitimate concerns with drafting overagers. The older they are on draft day, the closer they are to unrestricted free agency. This gets even trickier if a draft re-entry is from a college prep league like the USHL or Canadian Junior “A”, which means they may opt for an additional four years in the NCAA and either choose to be a free agent after graduation or sign their entry-level deal with UFA age just a few years away. Of course, this is an extreme example that is the exception and not the rule, and teams have shown to throw caution to the wind in order to draft the player they obviously wanted from the onset.

The European pool offers teams a little more flexibility from a contractual standpoint, but the biggest risk is centered on the player not wanting to leave a cushy life playing for a club team that’s a cash cow in the country of his birth. No league creates this kind of scenario more than Russia’s KHL, which is fueled by billions of rubles in oil revenue, thus allowing teams to offer top prospects NHL-style contracts. A recent example of this hazard came in 2016, when the Toronto Maple Leafs used the first pick of the second round to take double-overage forward Yegor Korshkov, who at the time was property of the Lokomotiv organization — a major powerhouse in Russian sport. Although signs point towards the 22-year-old Russian forward joining the Leafs for camp next season, the decision by a losing team to use an incredibly high pick on a contracted player passed over at each of the two previous drafts reveals just how high these overagers can climb on a draft board. The lure of playing in the NHL sure is a nice trump card to possess, and it can have a profound impact on a team’s draft strategy.

This year’s group of overagers is talent heavy at the top, beginning with headline-grabbing winger Brett Leason, a 1999-born two-way forward from the WHL’s Prince Albert Raiders. Leason at press time was among the leaders in scoring, and some feel he could be the first double-overage player taken in the first round since 2012, when a nearly 20-year-old Tanner Pearson went 30th overall to the Kings. How high Leason goes at the draft remains a bit of a mystery, since he was passed over in both 2017 and 2018 in years where his production and play on the ice did not mirror what you normally expect out of a notable prospect. The question for scouts to determine is if Leason’s explosion on the scoresheet is a either the result of hard work and skill previously considered untapped or is he simply a big boy taking advantage of smaller opponents in a league he is quite familiar with. In my view, it’s certainly the former, as Leason’s hockey sense, stickhandling and playmaking ability are among the best of draft-eligible prospects of any age, and Team Canada giving him a WJC spot is a testament to his 200-foot-game strong. For that, Leason is my top-ranked overager for the 2019 draft.

1. RW Brett Leason (Prince Albert, WHL | 6’4, 199 | 4/30/99): A powerful three-zone forward with exceptional vision and balance, Leason is the WHL’s leading scorer and a candidate for WHL most valuable player. He earned a well-deserved spot on team Canada’s under-20 world junior team.

2. RW Kirill Slepets (Lokomotiv, KHL | 5’10, 146 | 4/6/99): A slippery forwards with elite puck skills, Slepets has worked hard on his play in the defensive zone to become one of the most versatile forwards available for the draft. He creates a lot of turnovers, and he can be effective killing penalties and running a power play from the half-wall.

3. LHD Valeri Orekhov (Barys Astana, KHL | 6’1, 190 | 1/26/99): One of the top young two-way defenders playing outside of North America, Orekhov is a rarity in that he is a teenager defenseman playing key minutes in the KHL. He captained Kazakhstan to a relegation-round win over Denmark at last month’s WJC’s. Orekhov is a fantastic skater with a very hard shot who can be used to match up against opposing top lines.

4. C Brett Kemp (Medicine Hat, WHL | 6’1, 161 | 3/23/00): A smart two-way forward with a knack for scoring important goals, Kemp recently was moved from the high-flying Edmonton Oil Kings to the more conservative Tigers. He can play center or wing, but his deadly shot-release combination makes him a focal point on the power play.

5. LW Carl Jakobsson (Farjestad, SHL | 6’2, 165 | 7/13/00): This wiry goal-scoring winger has a deadly shot and works hard to find the opening necessary to use it. Jakobsson makes the most of his limited minutes with Farjestad, which is coached by his father Peter. His release already is at a pro level.

6. C Artyom Galimov (Bars Kazan, VHL | 6’0, 172 | 9/8/99): A hard-charging, two-way center with top-end speed and an excellent wrist shot, Galimov proved his worth for Russia during their victory over the Canadian Hockey League All-Stars at the November Summit Series. He can be counted on to provide a high compete level and create offense off the rush.

7. C/W Alexander Zhabreyev (Dynamo SPB, MHL | 5’7, 152 | 3/24/00): An incredibly slippery playmaker who can be a wizard with the puck, Zhabreyev makes up for a lack of size with a nonstop motor and outstanding hockey sense. He is almost impossible to stop in open ice, and his ability to tire out bigger defenders during lengthy possessions expands the ice for his teammates.

8. RW Samuel Fagemo (Frolunda, SHL | 6’0, 194 | 3/14/00): One of the best pure goal scorers available in the draft, Fagemo has been a national team mainstay for Sweden at all the important teenager tournaments, including last month’s WJC. Although he was quiet at that event, his consistency and production for Frolunda in one of the tougher elite leagues are too impressive to ignore.

9. C/W Ivan Drozdov (Dinamo Minsk, KHL | 6’0, 174 | 11/15/99): Drozdov is a threat every time he steps onto the ice no matter the situation, to include while on the penalty kill. His superior play on the puck is obvious at first glance, as is his strong skating and impressive agility. What makes Drozdov special, however, is what he has cooking upstairs — he thinks the game three or four plays ahead of everyone else.

10. LHD Justin Bergeron (Rouyn-Noranda, QMJHL | 6’1, 181 | 9/14/00): One of the bigger surprises from last year’s draft was the omission of this cerebral two-way defender, who was one of the youngest prospects among his 2018 draft peers. This season, Bergeron is playing like a teenager possessed, as he’s one of the top scoring defensemen and playing big minutes Rouyn-Noranda. His combination of skating, size and quick thinking should land him the NHL contract he should have received last year.

11. C Nikita Rozhkov (Stalnye Lisy, MHL | 5’10, 168 | 2/18/00): The heartbeat of Stalnye Lisy’s vaunted attack is the go-to options when things get dicey. Rozhkov has dealt with the linemate carousel all season without skipping a beat, leading the Silver Foxes in scoring and ranking third overall in the league with 50 points in 43 games. He has incredible hands and acute vision, and he too can be a scoring threat on the penalty kill.

12. LHD Mattias Norlinder (MoDo, Allsvenskan | 5’11, 179 | 4/12/00): Offensive-minded blueliner is a joy to watch with the puck and played with confidence and poise the second he hit Allsvenskan ice for the first time. Norlinder simply was too good for the J20 Superelit, and his ice time has been increasing to that of a top-pairing defenseman.

Below is a list of draft-eligible prospects for the 2019 NHL Entry Draft who are past their initial year of eligibility. This ranking of over 400 prospects includes both North American and European players. To be considered for this ranking, players from North America must have birthdays between Jan. 1, 1999 and Sep. 15, 2000. European prospects are given an extra year of eligibility, so their zone of consideration is between Jan. 1, 1998 and Sep. 15, 2000.