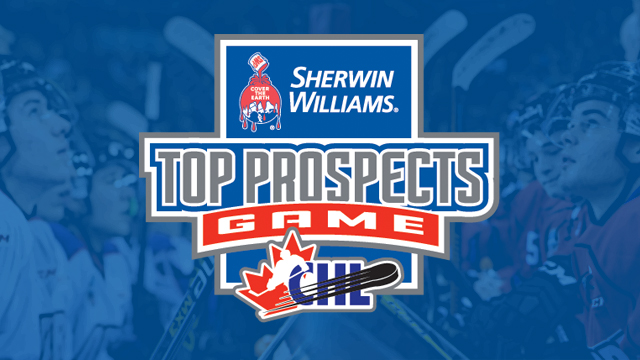 NASHVILLE (The Draft Analyst) — The NHL’s scouting community are headed back to Western Canada for the annual CHL Top Prospects Game, which takes place Wednesday from the Centrium in Red Deer, Alberta. Less than a month removed from the pressure-packed under-20 world junior hockey championship that lasted two weeks in Vancouver, scouts and team executives use the Top Prospects Game as an opportunity to see an exhibition where some of the top draft-eligible players can compete under one roof. Prospects are selected from Canada’s three major junior leagues — the Ontario Hockey League, the Quebec Major Junior Hockey League, and the Western Hockey League, with the latter having the strongest group of draft-eligible players. Although it’s doubtful any of the participating players will be chosen first overall in this year’s draft — that distinction likely goes to Team USA’s Jack Hughes —  current NHL stars like Connor McDavid, Patrick Kane and Nathan MacKinnon all participated in the annual event, now in its 24th year. Hockey Hall of Famer Bobby Orr and former NHL coach Don Cherry serve as the head coach for their respective teams.

This year’s contest will feature a trio of WHL prospects earmarked for the top 10 in the draft. Vancouver Giants defenseman Bowen Byram is the top blueliner in this year’s group, and he’s one of the WHL’s top scoring defenders. He’ll be joined on Team Cherry by a pair of hard-nosed, 200-foot centers in Lethbridge’s Dylan Cozens and Kootenay’s Peyton Krebs. Leading the way for Team Orr is 6-foot-3 playmaking center Kirby Dach of the Saskatoon Blades, who along with Cozens will serve as captains for their respective teams.

The game never disappoints in serving up some European flavor, and this year’s match will feature 10 prospects who crossed the pond to play North American Hockey. Danish goalie Mads Sogaard has been stellar for the Medicine Hat Tigers, and he’s seems to be fine after suffering a minor hip injury against the Edmonton Oil Kings on Jan. 16. Powerful two-way center Oleg Zaitsev will be playing in front of his home fans in Deer, and Finnish puck rusher Lasse Thomson of the Kelowna Rockets is the WHL’s top scoring rookie defenseman.

Most American prospects choose to stay in the U.S. for their amateur developement, but Staten Island-born sniper Arthur Kaliyev of the Hamilton Bulldogs clearly is one of the top goal scorers for the upcoming draft. Blessed with size, strength and a tremendous shot, he develops instant chemistry with his linemates and can intimidate a goalie with his heavy slapper. Also from the OHL are a pair of offensive defenseman in Kingston’s Billy Constantinou and Mississauga’s Thomas Harley. Constantinou is a faboulous skater with the ability to dazzle off the rush, while Harley is an extremely poised puck mover with crisp passing ability and sound decison making that helps him take the puck across center. Also be on the lookout for Flint’s flashy import puck rusher Vladislav Kolyachonok and London Knights scoring machine Connor McMichael.

From Quebec, Raphael Lavoie of the Halifax Mooseheads and Moncton Wildcat Jakob Pelletier are two of the most versatile forwards in Canadian major junior. Lavoie is a big-bodied scorer who can play the role of either a sniper from the flank or a creative playmaker from the half-wall. Pelletier has one of the highest compete levels among all draft-eligible prospects and plays far bigger than his 5-foot-9 frame may indicate. Both like to control the puck and are excellent options in the possession game.

The game can be streamed for a price here. Head over to sherwin-williamstopprospects.ca for a live box score. Puck drop is at 10:00 PM ET / 8:00 PM MT.