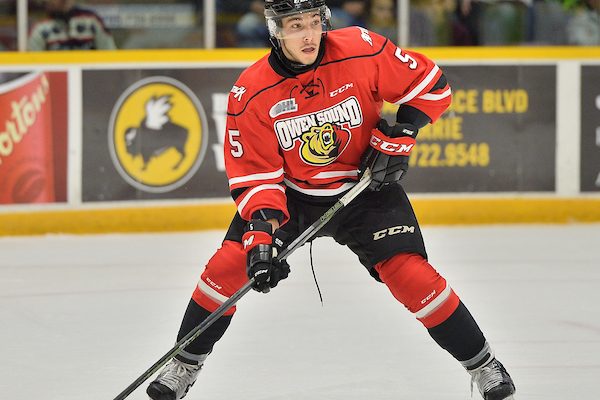 Owen Sound defenseman Sean Durzi is one of the OHL’s top scorers and is contending for a spot on Canada’s under-20 world junior team (Photo: Terry Wilson, OHL Images)

NASHVILLE (The Draft Analyst) — The 2018 NHL draft is expected to boast a talent pool rich in skill and star potential — an assessment that could force teams to decrease the number of former draft holdovers they select. Nevertheless, there always are NHL-caliber prospects who simply need to marinate an additional year or two (or three) before NHL clubs are willing to commit a valuable draft pick for them. Because of that, we’ve listed 250 quality prospects from both Europe and North America passed over in previous drafts who fans should keep an eye on as the regular season progresses. Here are the Top-5 overage prospects for the 2018 draft, with the rankings below.

1) RHD Sean Durzi (Owen Sound, OHL): Teams may be kicking themselves one day if they continue to overlook this mobile two-way blueliner who is one of the OHL’s top puck distributors. The stats may seem like it is he who benefits from playing on a solid team with firepower, but watching him closely reveals a key cog who makes smart decisions with his breakouts and is as reliable a power-play quarterback as you’ll find.

2) C/W Nikita Anokhovsky (Loko, MHL): Strong power center with good speed, a wicked shot and excellent hand-eye coordination who graduated from a role player last year to become one of the MHL’s deadliest threats with the puck. Anokhovsky is a load to handle along the boards and seems to always come away with the puck.

3) LW Jakub Lacka (Central Illinois, USHL): Slovak puck magician who has had a seamless transition to the North American game. Lacka is an outstanding playmaker and passer who effortlessly makes any teammate a threat to score. Arguably one of hockey’s top set-up forwards under the age of 20.

4) RHD Joey Keane (Barrie, OHL): Team USA’s best defender from their silver-medal-winning squad at the 2016 U18 Ivan Hlinka has bounced back from a rough rookie season in a big way, as he’s among the OHL’s top-scoring rearguards. Keane is a fluid skater with excellent vision and has significantly improved his decision making and reads.

5) C Jesse Koskenkorva (Karpat, Liiga): Versatile two-way center with an excellent shot who is too good for Finland’s junior ranks an could be a mainstay in the elite SM-Liiga for most of the season. He was one of Finland’s top players at a recent U19 event against the Czech Republic and is on the cusp on making the world junior squad this year. Koskenkorva isn’t super flashy but his positioning, skating and effort will make him a useful player at the next level.

Below is a detailed sortable table of The Draft Analyst’s November rankings of overage draft-eligible prospects for the 2018 NHL Entry Draft, to be held in Dallas on 23-24 June. Players from North America born between 01 January 1998 and 15 September 1999 were considered in the zone for overage draft eligibility and were previously eligible for the 2015 or 2016 NHL Entry Drafts. European prospects considered were born between 01 January 1997 and 15 September 1999.