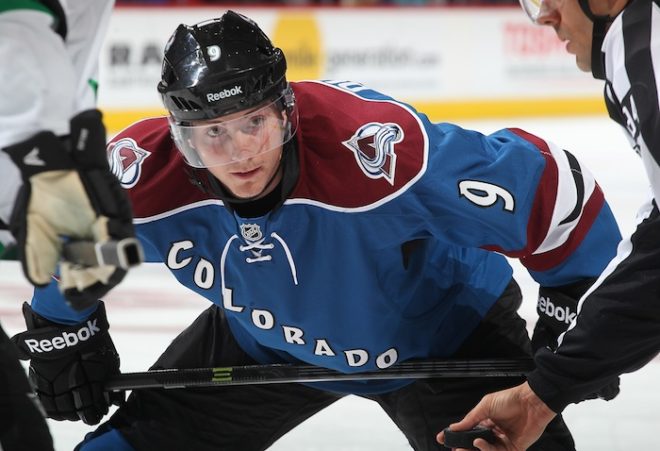 NASHVILLE (The Draft Analyst) — It’s ok. You can say it. The Colorado Avalanche finally won something.

The NHL’s worst team from a year ago ended nearly two years or rumor and speculation by dealing much-maligned forward Matt Duchene to the Ottawa Senators in a three-team deal that provided Colorado with an impressive stockpile of prospects and draft picks. To make the trade happen, the Senators shipped center Kyle Turris to the Nashville Predators, who immediately extended the pending free agent to a six-year contract worth $36 million after shipping two prospects and a pick of their own to the Avalanche.

But it was the haul acquired by Avalanche general manager Joe Sakic that seems to have laid the groundwork for his struggling team to return to respectability. How long that will take cannot be answered right now, but Sakic nonetheless bolstered Colorado’s prospect pool by acquiring a total of seven pieces, beginning with centers Vladislav Kamenev and defenseman Samuel Girard from Nashville. He also added center Shane Bowers — a first-round pick of Ottawa’s in 2017 who is currently a freshman at Boston University — plus minor-leagie goalie Andrew Hammond, Ottawa’s first-round pick in 2018 and its third rounder in 2019. Sakic also received Nashville’s second-round pick in 2018.

Duchene — the second overall pick in the 2009 NHL draft — has seen a recent drop in both production and ice time as the Avalanche seemed keen to build around younger players like forwards Nathan MacKinnon and Mikko Rantanen. Duchene, 27,  has two years remaining on a contract that will cost Ottawa $6 million a year against the salary cap. He will immediately take over for Turris, who at 29 was due to become an unrestricted free agent in July but was one of the Senators’ more productive forwards and played over 19 minutes a game.

Assessment: It is tough to see from a tactical standpoint how replacing center Kyle Turris with Matt Duchene makes the Senators a bigger threat to win the Eastern Conference, and this trade at first glance came across as a big overpayment by Ottawa. But a deeper dig reveals that it’s merely a slight one that can be explained in a  manner of ways. For starters, they had to move Turris  — one of their top two scoring forwards in four of the last five seasons — to make the deal happen. Turris, who turns 29 next August, was due for a new contract in July and likely was going to be too expensive for the Senators to re-sign him. But he was a valuable piece to the organization both on and off the ice, and his play against the New York Rangers in last year’s Eastern Conference semifinals proved critical in the series win. Additionally, there is not much of disparity between Turris and Duchene in both advanced and traditional statistics, especially since 2013-14.

Yes, the Senators get Duchene, who turns 27 in January —  almost two years younger than Turris — and essentially has two full years in Ottawa until a new deal will be required. And that slight advantage in age and contract security may just be enough to justify such a significant gut punch to Ottawa’s cupboard. Did general manager Pierre Dorion overpay because of contract length or was it because of the talents of the player he acquired? I tend to lean towards the former than the latter, as Duchene no longer is a dynamic player capable of taking over games. In Dorion’s defense, however, he didn’t set some sort of precedent, as the New York Islanders and GM Garth Snow made a similar deal with Buffalo in October of 2013 to acquire scoring winger (and pending UFA) Thomas Vanek for sniper Matt Moulson, a 2014 first round pick and a 2015 second rounder. Some could say that the Senators paid market value for a player of Duchene’s ilk.

Of course, losing both a solid prospect in Shane Bowers (a 2017 first-round pick) in addition to a first-round pick from a 2018 draft crop that is incredibly strong will be all for naught well if the Senators don’t return to the conference finals. The 2019 3rd rounder is a loss a contending team can live with, and they saved some money by unloading AHL goalie Andrew Hammond, who to his credit used turned his magical half-season run in 2015 into a lucrative contract the Sens had no choice but to offer him.

The proponents of this trade will point to Ottawa’s lengthy pipeline of centers — Bowers, as strong a two-way prospect as you’ll find, is nonetheless a notch below Colin White, Logan Brown and Filip Chlapik. Possessing this kind of surplus undoubtedly played a role in Dorion’s decision to trade Bowers, who at this point is a solid player for Boston University and has legitimate Top-9 potential at the NHL level.

Lastly, Duchene absolutely wears out the Atlantic division. Five of his 10 highest career points-per-game averages against NHL clubs are against teams from his new division.

Assessment: General manager Joe Sakic deserves a lot for credit for squeezing both Nashville and Ottawa for what appears to be one of the biggest prospect hauls in recent NHL history. If you really want to break it down, Sakic traded an underperforming Matt Duchene  — a player who was unable to carry the franchise to respectability, let alone a playoff berth — for a total of three blue-chip prospects and three high draft picks. It has to feel good for Colorado, which lost out in last year’s lottery draft process despite finshing with the NHL’s worst record by 21 points. That doesn’t necessarily excuse Sakic for letting the drama with Duchene drag on for nearly two years. Duchene turned out to be a massive distraction, and the results on the ice and in the scoresheet somewhat prove it. Nevertheless, Sakic’s organization is in a far better strategic state right now than it was 24 hours ago, and he has enough assets to go out and really set the conditions for the Av’s to return to prominence. Remember, Sakic went through this process back in the late 1980’s as youngster in Quebec, which was forced to trade aging fan-favorites Peter Statsny and Michel Goulet in order to set the conditions for what turned out to be the mini-dynasty Avalanche of Sakic and Peter Forsberg.

Since Colorado were the clear sellers, here is a quick breakdown of the prospects they acquired:

C Shane Bowers (Boston University, HE | 6’2, 186 | 7/30/99 | Shoots left | OTT 1st (28th)/2017 Draft): Big two-way center with speed who was a top QMJHL draft pick but chose the USHL to pursue a stint with Boston University, where he is second in goals (4) and fifth in points (6). Bowers is a bit underrated since he processes the game at high level and has the quickness to impact play in all three zones. He’s a highly-intelligent 200-foot player who is responsible with the puck, but he plays with an air of dynamism to compliment his many puck skills. Bowers can create or finish plays on the rush, and is very crafty and creative. He makes difficult plays look easy, especially in traffic while acting strong on the puck to handle harassment as he’s controlling in tight spaces. Bowers looks to slip away into an open area with the hammer cocked, as he owns a lethal shot and can fire it with accuracy even if the puck is behind, in front of or in his skates. He’s deceptive on zone entries as he can use a speed burst for a cage rush, or slow it down and dump it off to a cutter or trailer.

LHD Samuel Girard (5’10, 162 | 5/12/98 | Shoots left | NSH 2nd (47th)/2016 Draft): The knock on Girard has always been his size and the subsequent inability to handle bigger players. However, he’s improved his positioning, stick work and anticipation to the point where he’s no longer a question mark from below his own faceoff dots. His puck skills are sublime, and he’s an excellent passer who can spot and connect with the open man with ease. His straight-line speed is slightly above average, as is the power of his shot. But he is incredibly accurate and has a quick release, which makes him difficult to defend when he’s running the power play. Smart, poised and decisive, Girard is a mature rearguard who is capable of putting up points at any level.

C Vladislav Kamenev (Milwaukee Admirals, AHL | 6’2, 193 | 8/12/96 | Shoots left | NSH 2nd (42nd)/2014 Draft): Kamenev is a versatile player with a balanced skill set who at times is clearly the best player on the ice. He has average speed and a wide stride, but he’s capable of dangling his way around traffic and setting himself up for a quality chance, usually in the form of a heavy, accurate shot from between the circles. Size aside, Kamenev’s strongest assets are his blistering shot and his hands — he is an excellent stickhandler, can make plays in traffic, deaden tough passes and roof the puck with authority from in close. He’s been used in all situations and is dependable on key faceoffs and the ensuing board battles. His lack of straight-line speed is obvious the second he hits the ice, but Kamenev is a smart player who keeps his legs wide and has a long reach that make it difficult to strip him of the puck.

Assessment: The Predators were looking for a legitimate Top-6 center to augment Ryan Johansen, and the playoff-tested Turris gives them not only a playoff-tested pivot with skill, but one who if necessary could fill in on the top line. The move allows summer free agent signee Nick Bonino to drop down into his customary third-line slot, thus giving Nashville one of the NHL’s strongest group of pivots. General manager David Poile seems to always do well in trades, and locking up Turris for six years at $6 million a season was the cherry on top of a deal that in one fell swoop made the Predators a better team than they were the day prior.

Like Ottawa’s trade for Duchene, however, the acquisition of Turris didn’t come cheap, as Nashville had to part with skilled Russian two-way center Vladislav Kamemev — one of the top prospects in the American Hockey League — and power play specialist Samuel Girard, a smallish defender who made the club out of camp less than two years removed from being drafted. Both Kamenev (2014 draft) and Girard (2016 draft) were former second-round picks, and a 2018 second rounder was thrown in for good measure. The emergence of center Yakov Trenin — a second-round pick in 2015 — likely made Kamenev expendable, but losing the talented Girard is the one that probably stings the Predators the most.

You can make a strong case that getting Turris cost Poile his two most NHL-ready prospects. But like Ottawa, the organization is looking to either match or exceed its postseason performance from a year ago. Keeping up with the Joneses comes with a price tag, and acquiring Turris meant Nashville had to part with an original 2nd round pick for the first time since 2013 when they moved one to Montreal for Andrei Kostytsin.

Since then, their original second rounders read Kamenev, Trenin, Girard and Grant Mismash — all oozing significant NHL potential. These are the trades you make when your GM and scouts have the Midas touch at the draft table.