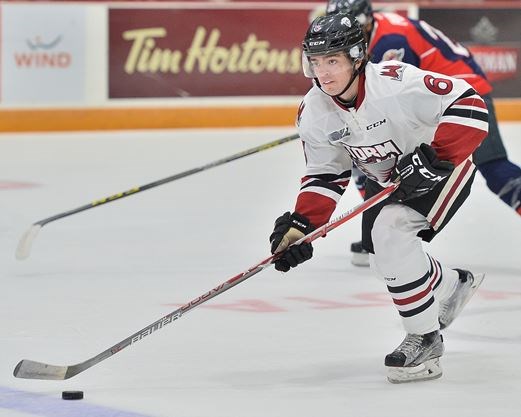 Roving playmaker from the blueline with excellent speed and a superior understanding of his responsibilites as a jump-starter and attacker. Merkley is pure offense in every sense of the term, and it seems as everything he does with the puck has a cherry on top. He is a commanding presence who carries the puck as well as he dishes it out, and you can always count on him to find the open man, especially back-door and off the rush. Merkley has a quick first step, but he also shifts speeds to routinely catch opponents flat footed. It’s hard to see Guelph’s attack survive without him, as it relies heavily on his quick, crisp breakout passes that trap the most aggressive of forecheckers. He owns a hard, accurate shot with a big wind-up, Merkley gets enough mustard on long-distance wristers to force goalies to lose control of rebounds.

Merkely plays with intensity but is not to be confused with a physical, shut-down defender. Keeping him stapled to his own slot during opposing possessions above the hash marks seems next to impossible, and he will roam well above the circles to chase the puck. He has difficulty handling bigger forwards in the slot or in the corners, which might explain the floating, and there are times in his own end when he gets too cute with the puck. These issues can be fixed over time, but it remains to be seem how much NHL general managers are willing to overlook the defensive shortcomings of such a rare and gifted puck distributor.