Photo courtesy of the Vancouver Sun 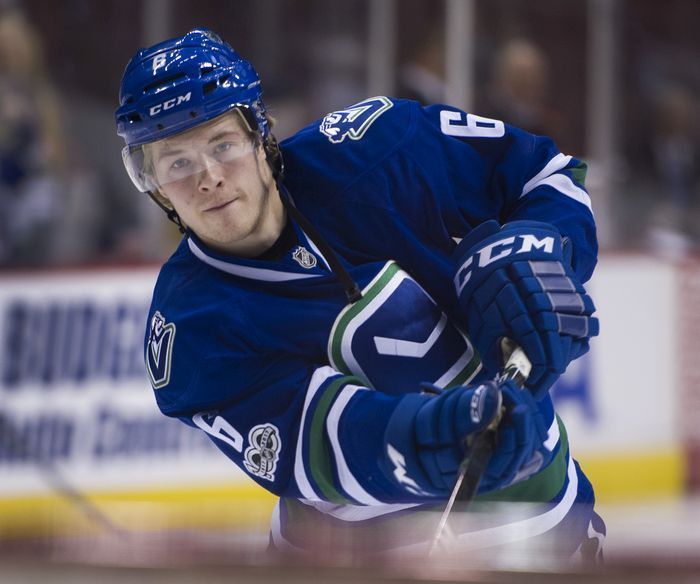 NASHVILLE (The Draft Analyst) — The calendar may read November, but solid early-season performances by several dozen NHL newcomers have set the conditions for what appears to be a wide open race for rookie of the year.

As expected, NHL teams are continuing the trend of filling rosters with younger, cheaper talent. The number of 30-somethings playing in the NHL is steadily declining while the total amount of 20-somethings to appear in at least one NHL game per season is increasing. Granted, a lot of this has to do with money, as in the cost of icing rookies on entry-level deals doesn’t put as much pressure on the salary cap as say, a 30-year-old veteran would. Throw in stiffer rules aimed at opening up the ice for skilled players, plus the fact that NHL general managers are more open to the idea of drafting smaller finesse types, and you have the making of a league-wide phenomenon that has created an environment conducive to younger, quicker athletes.

As you can see, the gap in the ratio of older players to younger is narrowing, thus creating more competition among rookies. The more youngsters a coach has at his disposal, the more inclined he’ll be to play them.

As for the rookies themselves, several are barely a year removed from being drafted, and several have yet to hit their 20’s. One of them is Arizona Coyotes sensation Clayton Keller, who from a traditional stats standpoint seems to be the favorite to win the Calder. The St. Louis-area native leads NHL freshman with 11 goals and 17 points in 20 games after a stellar career with Team USA’s development program. As good as Keller has been, however, he is by no means a runaway candidate.

An analysis of his production reveals a player who is benefitting from a significant amount of ice time while playing for the league’s worst team. The Coyotes have nothing to lose by force feeding Keller top-line minutes, as they began the season losing their first 11 games. To the youngster’s credit, it didn’t him long to leave an imprint on league, as he’s already amassed a sizable collection of dizzying, highlight-reel plays.

Nonetheless, Keller has a long list of peers to keep at bay, especially when you add the fact that he’s appeared in more games than most of his immediate competitors. For example, Keller has appeared in five more games than Vancouver winger Brock Boeser, who leads all rookies with 3.81 points-per-60 minutes and is second to Keller with 15 points in 15 games. The metrics do however indicate that Boeser is taking full advantage of the over three minutes a game he spends on the power play — seven of Boeser’s 15 points have come with the man advantage. Conversely, 14 of Keller’s 17 points have come at even strength, which in part is a byproduct of playing over 16 minutes a game when on-ice manpower is equal.

Then there’s New York Islanders’ center Mathew Barzal, a slick playmaker whom in 2015 the Islanders drafted 16th overall in the mind-numbing draft day heist from Edmonton known as the Griffin Reinhart trade. Barzal,  who at 20 years of age has all but solidified himself as the No. 2 center the Islanders had been looking for to ease the burden on top pivot John Tavares, is tied for the rookie lead with 11 assists — 8 of the primary variety.

In other words, Barzal (as expected) is setting up goals as opposed to piggybacking points off of some other linemates’ hard work. Additionally, Barzal is not just a point producer. He leads all top rookie forwards with a 56.6 CF% and a +8.1 CF% rel. In other words, his presence on the ice leads to more chances/shots for the Islanders than his opponents, and the Islanders as a team generate more shot attempts with Barzal on the ice than when he’s sitting on the bench.

Keep in mind, there are always other variables. And Barzal leading the way in the Corsi department only confirms his importance on the ice rather than categorically state he’s the best rookie of his class. Watching Barzal play reveals a deadly player who creates chances in the clutch — close games or late in periods — seven of his 11 assists were on goals that either tied the score, broke the tie or gave the Islanders the ever-important two-goal lead.

One of the biggest surprises of the early season is the play of the New Jersey Devils, who through Wednesday owned one of the league’s best records just months removed from a season in which they finished with 28th overall. The offseason got off to a good start when they won the draft lottery and took center Nico Hischier first overall — not the most controversial of first overall picks but there certainly was some suspense surrounding it. The Devils rolled the dice and took Hischier over top-rate center Nolan Patrick, who went to Philadelphia with the next pick but continues to get visits from the Injury Fairy. Hischier has been tremendous for the first-place Devils, ranking second on the team with 14 points (3 goals, 11 assists — 7 primary) and is tied with Barzal for third in scoring among NHL rookies.

But Hischier is not the only rookie forward helping the Devils return to respectability. Swedish two-way winger Jesper Bratt — less than two seasons removed from being chosen 162nd overall at the 2016 draft — is tied with former Devils’ draft pick Alexander Kerfoot (more on him in a bit) for fifth in rookie scoring with 13 points. Unlike his peers, however, Bratt is both a reliable penalty killer and produces on the power play. His 5v5 numbers may not be eye popping, but six of his eight assists are of the primary variety. As of right now, both Hischier (45.1% CF) and Bratt (46.6%) in comparison to other notable rookie aren’t setting the world on fire in the Corsi world, but their on-ice value (both on the plus side in CF% rel) and ability to create chances is still pretty good considering New Jersey is one of the league’s worst possession teams.

The aforementioned Kerfoot was a big deal late this summer when he turned his back on the Devils and signed with Colorado. The sting on New Jersey was lessened since he not only was expected to bolt, but the Devils eventually gained a prospect of their own in defenseman Will Butcher. A standout at Harvard University, Kerfoot has been one productive center whose play made the trading of Matt Duchene all the more palatable. He ranks second only to Boeser in points-per-60 minutes (3.69) and is first with a sparkling 35.0% shooting percentage (7 goals on 20 shots). Drafted in 2012, Kerfoot has anywhere from 3-5 years on most of the competing prospects, so it remains to be seen if that will factor into postseason voting. Like New Jersey with their youngsters, Kerfoot has played a key role in his team’s resurgence in the standings. The Avalanche at 8-7-1 through their first 16 games already are ahead of last year’s pace.

There are others as well, such as Los Angeles Kings’ forward Adrian Kempe, a talented Swede who they let marinate in both Europe and the minors for three years before giving him a regular shift. The Kings’ patience has certainly paid off, as Kempe has produced all 11 of his points at even strength. His role is a bit sheltered — he starts off in the offensive zone over 64% of the time, which is second highest among notable rookie forwards. Still, his production rate of 3.10 points-per-60 minutes is good enough to keep him in the Calder conversation.

Last season, the duel between phenoms Auston Matthews of Toronto and Winnipeg’s Patrik Laine seemed closer at midseason than it did at the end, with Matthews winning the Calder Trophy with an astounding 164 out of 167 first-place votes. Laine took the remaining three first place votes, which was surprising considering the Finnish sniper finished with just four less goals and five less points than Matthews. As close as this Calder race may seem at the moment, expect at least two or three rookies to pull away in the second half, with one overwhelming favorite to emerge.