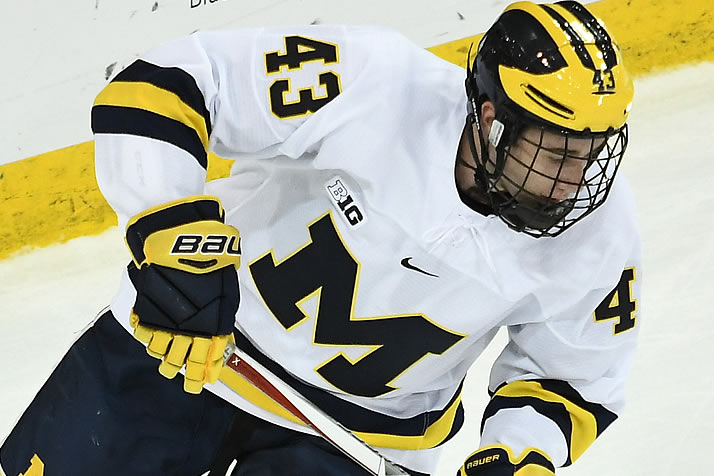 Smooth-skating offensive defenseman with superior command of his puck control and distribution, Hughes is the very best of a talented group of American draft-eligible rearguards. Raised and nurtured within a deeply-rooted hockey family, the current freshman at Michigan is one of the NCAA’s top newcomers and became an instant go-to option on a team loaded with NHL prospects and quality upperclassmen. The first thing you notice about Hughes is his calmness with the puck — he rarely, if ever, gets frazzled or frustrated in the face of a relentless or physical opponent. His ability to maintain control of the puck under harrowing circumstances is excellent, but it’s the plays he makes immediately after eluding pressure that sets him apart from the significant majority of not only his draft peers, but all defensemen in college hockey.

Hughes is a strong playmaker with excellent vision, capable of threading the needle with either hard or saucered cross-ice passes. Additionally, he has a heavy shot with a quick release, and goaltenders have to work hard to control rebounds of his shots. Hughes makes plays on his backhand look effortless, and he’s adept at receiving and settling down pucks while traveling at a high rate of speed. His defensive play is relatively sound in terms of positioning and one-on-one tactics. Hughes has improved the timing of his step-ups and hip checks, and he stands his ground on zone entries despite obvious limitations in size and stick length. Losing slot territory to bigger players should be expected, but Hughes is a clever thief with a quick stick who transitions from defense to offense in the blink of an eye. He has top-pairing potential and can quarterback any power play regardless of the talent or skill level of the surrounding personnel.