Photo courtesy of the Flint Firebirds 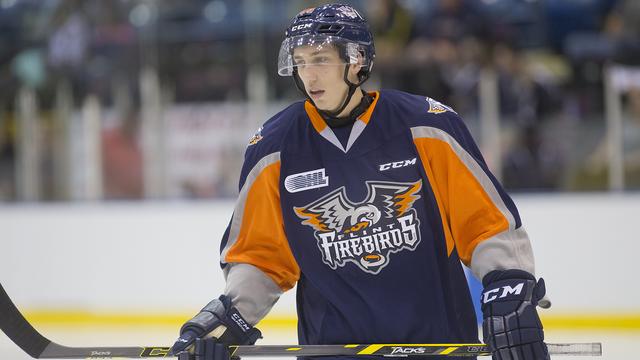 Position: Center/Right Wing
Shoots: Right
Height/Weight: 5’10 171 lbs
Born: July 10th, 1998, Gloucester, ON
Obtained: Drafted in the first round (7th overall) by the Plymouth Whalers in the 2014 OHL Priority Selection (the Plymouth franchise was renamed the Flint Firebirds for the 2015-16 season).
Notes: 2015-16: Led Flint in goals (30) and overall scoring with 65 points in 67 games…Ranked first on the Firebirds in assists (35)…Won 173 of 431 faceoffs (40.1 percent)…Tied for second in team scoring with eight points in seven games for Team Canada at the 2015 IIHF under-18 world championship…Played for Team Orr at the 2016 CHL Top Prospects Game…Appeared in one game for Team OHL at the 2015 CHL Canada-Russia Super Series…Recorded a goal and an assist in five games for Team Canada’s gold medal –winning entry at the 2015 U18 Ivan Hlinka Memorial Cup…2014-15: Ranked 14th among OHL rookies in scoring with 31 points…Recorded two goals and three assists in five games for Team Canada-Red at the 2015 World U17 Hockey Challenge.

Feisty sparkplug with superior vision who’s dealt with a ton of adversity while serving as Flint’s captain and leader during its chaotic inaugural OHL season. To say Bitten carries his team is an understatement; he’s scored 30 goals on the team who averages under three goals a game. But there’s more to his game than offense, as he’s used in all situations and serves as Flint’s top option for both the power play and the penalty kill.

Bitten is somewhat undersized, but he has tremendous balance and escapability. He is a very good skater with excellent breakaway speed, and can beat defenders to the outside or turn them inside-out thanks to a variety of on-the-go jukes and fakes. He’s a disciplined solider who follows instruction, always willing to dial down his role in order to do what’s best of the team. Bitten knows what to do with the puck, owning a soft set of hands and excellent hand-eye coordination. He’s one of the draft’s best at making something out of nothing, and we think he’d be one of the circuit’s top scorers had he had more finishers to work with.