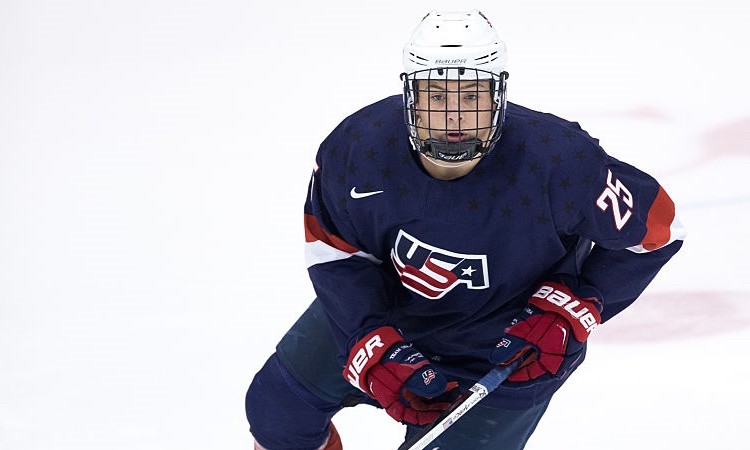 Position: Defensemen
Shoots: Right
Height/Weight: 6’0 208 lbs
Born: December 21, 1997, Long Beach, NY
The Draft Analyst Ranking: 27th (March)
Obtained: Committed to Boston University on August 13th, 2013
Notes: 2015-16: Named to Hockey East All-Rookie Team after leading Boston University defensemen in points (24) and assists (21)…Recorded four assists in a playoff win over Massachusetts-Amherst — the first Terrier blueliner to do so since 2009 (Matt Gilroy)…Appeared in seven games for Team USA as they won the bronze medal at the 2016 Under-20 World Junior Championship…Played for Team Plante at the 2015 All-American Top Prospects Game, where he recorded an assist in a 6-4 win over Team Roenick…2014-15: Topped all Team USA defensemen in goals (7), assists (33) and points (40)…Placed third among defensemen in assists (4) and points (4) to help Team USA win gold at the 2015 Under-18 World Championship…Registered a goal and two assists in four games as Team USA won the 2015 U18 Five Nations Tournament in the Czech Republic…Scored a goal in four games to help Team USA win the 2014 U18 Four Nations Tournament in Sweden…2013-14: Finished third in scoring among Team USA defenseman with 19 points, trailing only 2015 NHL first round draft picks Zach Werenski and Noah Hanifin…Recorded a goal and two assists in six games as Team USA won gold at the 2014 World Under-17 Hockey Challenge…Had a goal and two assists in four games as Team USA captured 2014 Five Nations Tournament in Sundvall, Sweden…Notched a goal and an assist in three games to help Team USA take the 2013 Four Nations Cup in Prievidza, Slovakia…Selected in the sixth round (113th overall) by Kitchener in the 2013 OHL Priority selection.

Sturdy two-way defenseman who immediately became a key cog on Boston University’s blueline. A native of Long Island who was reared in the Gulls’ program before a run with last year’s NTDP under-18 squad, McAvoy is built for the modern game – thick, explosive and assertive. He’s a strong skater with excellent balance and superior mobility both up and across the ice. McAvoy loves to join the rush and can read a play as good as any of his draft-eligible peers – something we saw last year as a defenseman on Team USA.

He’s a confident puck carrier who attacks openings with speed, but can also slow it down and patiently weigh his options. Always moving his feet, McAvoy is capable of slipping through gaps without the puck, or stickhandling around traffic while keeping the puck close to his body. He has a heavy shot that can be delivered with accuracy, and his passes are tape to tape, An undervalued part of his game is physicality, which gets him in hot water as he’s still learning the difference between a timely, legal bone-crushing hit and gross negligence of the rule book.