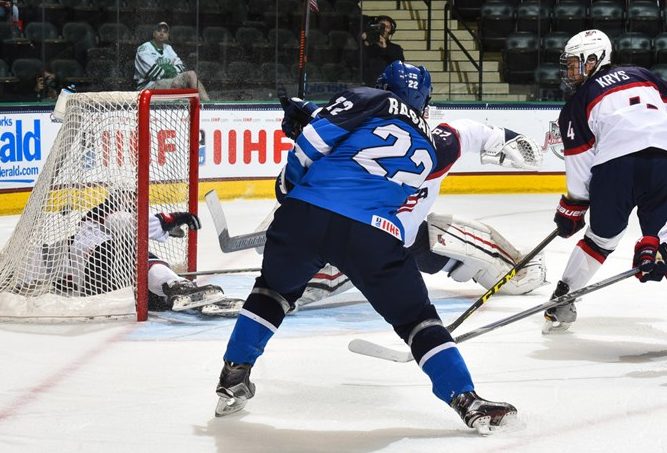 Grand Forks (The Draft Analyst) — The games between four countries expected to challenge for a gold medal lived up to the hype surrounding Semifinal Saturday, with Sweden and Finland scoring upsets over pre-tournament favorites Canada and the United States, respectively. The Swedes punched their ticket to Sunday’s gold medal game with a 6-5 shootout win over the Canadians, who rallied with two late goals in the third period but had their hopes crushed on a clinching goal by Linus Lindstrom. The Americans and Finns — who met in last year’s title game, a 2-1 overtime win for the U.S. — were tied late in the third until Aapeli Rasanen cashed in on the power play with just 37 seconds left in regulation following a costly Clayton Keller penalty. Jesse Puljujarvi added an empty net goal to secure a 4-2 triumph. Sunday will be the first time since 2001 where neither Canada or the United States will play for under-18 gold, and it’s been 17 years since Sweden and Finland met in the final. You can find box scores, recaps and video here.

Center Aapeli Rasanen (Ranked No. 52): Watching this special talent has been a rewarding experience, and the fact that he scored a shorthanded goal and a power play goal — each giving Finland a lead — tells you what kind of player he is. This isn’t the first U18 tournament where he’s taken advantage of the visibility; he was dominant at the U18 Five Nations Tournament last February. He’s been a critical piece to Finland’s success in Grand Forks, and his efforts on Saturday against an American blitzkrieg brought the Finns to the title game. He made a relatively harmless shorthanded rush up ice turn into an adventure for U.S. defender Chad Krys, as Rasanen was able to gather his own rebound and bury a go-ahead goal with under five to play in the game. The Americans would later tie it on a Kailer Yamamoto tip-in, but Rasanen was Johnny-on-the-spot again, this time sneaking through three U.S. skater to get positioning and bang home the eventual winner with 37 seconds left. He understands the game and his instincts are exceptional. Take it from us — he’s not your run-of-the-mill two-way center. This kid has the speed and skill to match the smarts. He belongs to Tappara in the Finnish League, but expect him to go pretty high in the CHL Import Draft nonetheless.

Defenseman Chad Krys (Ranked No. 45): It’s always difficult to see a preseason favorite slowly (and I mean slowly) drop in our rankings, but Krys has been dealing with a variety of on-ice issues for almost three quarters of the season. Pegged by many to be the first NTDP defenseman picked in the 2016 draft, the Connecticut native is struggling, and the player who was once toeing the line between a first and second round pick now has to accept the fact that he’ll probably end up lower. He did a good job of avoiding trouble throughout the preliminary and quarterfinal rounds, but it’s easy for any Team USA defender to conceal warts when every game is a lopsided win. While he didn’t distinguish himself in any of the games heading into the semis, he certainly didn’t do anything egregiously wrong either. The game against Finland was a different story, as he had trouble with switches, was puck gazing too much and got caught wandering away from his post (he wasn’t alone in that regard). The shorthanded goal by Rasanen was obviously critical, and his failure to adhere to a simple edict — “play the man” — proved costly, as he turned the wrong way after blocking the initial shot, allowing Rasanen slop behind him and bury the loose puck. Maybe a case of bad luck, but Krys has had issues losing men in coverage all season. To make matters worse, he channeled his inner Adam Graves with a two-handed chop on Jesse Puljujarvi’s hand as the latter was skating in to ice the game with an empty netter. The play cost Krys a five and a game and could get him suspended for Sunday’s bronze medal game against Canada.

Defenseman Ryan Lindgren (Ranked No. 78): Lindgren’s game against the Finns was a microcoosm of his entire tournament — above-average in the defensive-zone but excellent at making plays. We like his puck-moving, and he’s been threading the needle on the power play with consistency. It’s not easy being the captain of a team loaded with stars, but Lindgren showed why he’s got legitimate pro potential by displaying a calmness with the puck. He’s listed at 6’0, 198 pounds, but there were a few times when he was moved off the puck by bigger and/or smaller players. That seemed odd to us because we’ve seen him handle bigger NCAA forwards quite often, but he still has a strong lower body and excellent balance nonetheless. Lindgren made a huge mistake on the eventual game-winner, however, as his release from Jesse Puljujarvi’s zone entry was a good three of four seconds too late, leaving Rasanen unchecked to bury the loose puck in the crease.

Defenseman Jacob Cederholm (Ranked No. 68): Cederholm is Sweden’s captain and blueline leader, likely because of his age (he was the Swedes’ oldest defender by a good six months). Things got off to a rough start for Cederholm, as he took a slashing minor a couple of minutes after the puck dropped that led to Pascal Laberge power play goal. And though Cederholm can look bland and unimaginative for most of a given game, at the end of the day, he crossed his t’s and dotted his i’s when it came to the variety of requirements for a top-pairing defender. His stick is always in the right position, and rarely did he vacate the slot to chase a player on an already overloaded side — the lone yet key exception coming on Jordan Kyrou’s game-tying goal in the third when he drifted into the near corner. More times than not, the first thing he looks for when the puck’s on his side is the opponent’s best/most-dangerous option, and in a split second he’s got either his long stick or body in position to thwart. Even the goal scored by Canada’s Jakob Chychrun was properly assessed and covered by Cederholm, who in our view distinguished himself and looked more polished in his own end than the tournament’s other big-bodied, draft-eligible rearguards (Logan Stanley, Markus Niemelainen, J.D. Greenway, et. al). He’s not very fast, but his stride is long enough to help him stay competitive during footraces.

Left wing Pascal Laberge (Ranked No. 18): Laberge can play both center and wing, but he spent the entire tournament as a bottom-six winger for Team Canada. He did get some time on the power play, which is where he was most dangerous. It looked as though Laberge opened the floodgates with his score-opening tally with the man advantage just 2:20 into the contest, as he took a pass from Chychrun and walked into the right circle for a pair of shots, the latter finding the back of the net for his second of the tournament. Laberge is a big-game player, so we think he the Canada’s coaching staff may have misplaced him. This kid’s shot packs a punch, but he didn’t have the pleasure of flanking a high-powered playmaker like Tyson Jost of Mike McLeod. We wouldn’t say the tournament helped his draft stock — he didn’t score a goal at even strength in any of the six games, but he was good enough to maintain it.