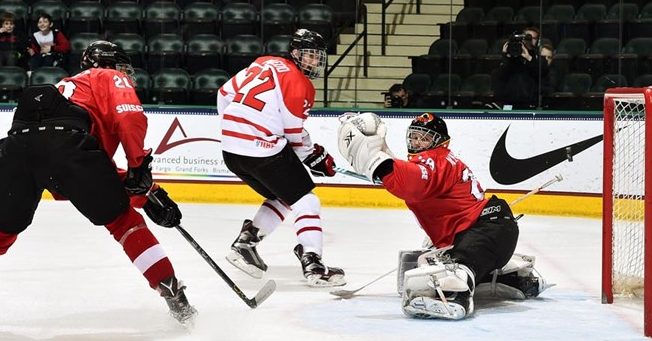 Grand Forks (The Draft Analyst) — The United States, the defending under-18 champions, kept its medal streak alive with an 8-0 thrashing of the Czech Republic, while Canada, Finland and Sweden also advanced with wins in their respective quarterfinals. The Americans improved to 5-0 thanks to a goal and two assists from leading scorer Clayton Keller. Team USA, which has earned a medal the last 12 tournaments, outscored their opponents by a 38-4 margin but play a tough Finnish squad which outlasted the Russians 4-3. Speedy wing Eeli Tolvanen had a hat trick, and Jesse Puljujarvi chipped in with a goal and an assist for Finland, which lost in overtime to Team USA in last year’s gold medal game. Canada dispatched Switzerland with a 9-1 rout, with captain Tyson Jost netting a hat trick and two assists to up his tournament scoring lead to 14 points in five games. Team Canada’s opponent in the semis will be Sweden, which used seven different goal scorers to trounce Slovakia 7-2. Lastly, the Latvians beat Denmark 5-1 in the opener of their best-of-three relegation series, with the winner securing a spot in next year’s tournament in Slovakia. You can find box scores and lineups here.

Center Mike McLeod (Ranked No. 9): McLeod has everything you’d want in a draft prospect — speed, creativity, size and an exceptional compete level. He’s displayed these special skills in spurts, but he’s otherwise had a marginal tournament. And while the Swiss were easy pushovers, the two goals he scored personified why he’s ranked so high — using his speed and vision to make plays. McLeod broke his tournament schneid in the second period with a nifty backhand roof job after he began the play with a speedy zone exit and entry. He capped off his best night of the competition with a pressure-induced Swiss turnover before darting to the net to one-time home a feed from right wing Owen Tippett (2017 eligible). He’s also won 61 percent of his draws (38-24), and three of his six shots for the tournament came in yesterday’s win.

Center Linus Lindstrom (Ranked No. 13): Sweden’s improving two-way pivot who plays with a sense of urgency every shift. He isn’t the best finisher, but Lindstrom clearly understands his role as a center that adds a key component on a team lacking in elite scoring depth. The Slovaks made things interesting with a first-period tally from Adam Ruzicka (2017 eligible), but it was Lindstrom’s “Havoc Line” with Oskar Steen and Jesper Bratt which won the draw, took the puck up ice, and pressed the Slovaks into a chance that led to defenseman Erik Brannstrom’s tying goal. Lindstrom consistently attacks the puck, and in this instance he dropped off a pass and went right to the net to cause problems. Good things happen every time his line is on the ice — they combined for 12 shots and Bratt later scored a goal of his own (on a different line). And although he took a hooking penalty early in the third that led to Slovak power play goal, the fact that he was able to skate up ice from his own crease area to even up the numbers confirms the work he’s done to improve his skating.

Left wing/Right wing Samuel Buckek (2017 eligible): We’ve talked about Slovakia’s depth for next year’s draft, and Bucek is a big reason why. A two-way power forward who loves to shoot the puck, he plays in a depth role for the USHL’s Chicago Steel, but in Grand Forks he’s been the Slovaks’ top dog, using his long reach and heady play to create chances, especially during trench warfare. It was Bucek who helped Slovakia beat the rival Czech Republic with a tie-breaking goal late in the third period of Wednesday’s 4-3 win. He entered the match with Sweden with four goals in four games, and picked up a nice assist on the power play in the third. After making a crisp pass to get the Slovaks into Swedish territory, he showed quick skate-to-stick transition skills on a loose puck, then centered from the left circle for a loose-puck tap in.

Center Otto Somppi (Ranked No. 100): Somppi’s rookie season with Halifax (QMJHL) was a bit inconsistent, so we looked at his U18 nomination as a good chance to help his draft stock. And although he’s operated in a depth capacity with little production (one assist in five games), Somppi’s been dominant in the faceoff dot, leading the circuit with a 72 percent success rate (61-24). The addition of Jesse Puljujarvi caused some line shuffling, and it was Somppi who bumped fellow pivot Otto Makinen down to the third line while the latter was promoted to center the aforementioned Puljujarvi and Janne Kuokkanen. He played like his pesky self against the Russians, using his active stick and speed to press opposing puck carriers. Somppi also revealed a consistent backchecking presence, which we rarely saw in our (limited) viewings of his play with Halifax. He’s far from physical — Somppi rarely finishes a check and acquiesces to the stick rather than the body way too often. But he looked good on Finland’s second power play unit and made a handful of controlled zone entries.

Defenseman Markus Niemelainen (Ranked No. 103): Will just get this out of the way and move on — Niemelainen is a Marc Staal clone. Now, you can interpret that any way you want. Is he:

In our view, he’s somewhere between options A and A and B, which any New York Rangers fan will tell you is a good thing. He won’t dazzle you — 99 out of every 100 plays he makes are cookie cutter and will keep you glued to your seat. But smart plays nonetheless, and we don’t see his play in Grand Forks that much different than what he does for the OHL’s Saginaw Spirit. He was winning his 50/50 battles, using his long stride and reach to prevent seemingly quicker players from gaining control in the Finnish end. He was hit or miss with his breakout passes, and should look to patent that left point wrister as he uses it a lot, sometimes to a fault.

Right wing Yaroslav Alexeyev (2017 Draft eligible): Alexeyev is a natural playmaker with speed who plays the wing. He was Russia’s consistent threat in previous games, showing good chemistry playing on a line with Mikhail Bitsadze (2018 eligible) — both undersized forwards at under six feet tall. Alexeyev has a short, choppy skating style and likes to hang around the outside, rarely involving himself in physical activity. He is a finesse player who looks more comfortable with time and space presented to him rather than making the smart, subtle plays to create it for himself. That being said, he made a nice play taking the puck wide and centering it to the point from behind the near post, a play resulting in Russia’s second goal. He capped the scoring in the third with a one-timer on the power play.