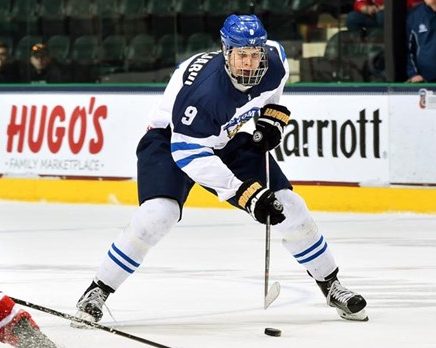 Grand Forks (The Draft Analyst) — The opening round of the 2016 under-18 world championship is complete, with Team USA and the Canadians sweeping their way towards the top seed in their respective group. Sweden opened up Tuesday’s action with a convincing 5-1 win over Russia thanks to Lias Andersson, a top prospect for the 2017 draft who scored twice. Canada made it four wins in as many games with a solid 3-1 win over Finland, which didn’t get the expected boost in the debut of draft-eligible phenom Jesse Puljujarvi. The Slovaks rallied to edge the rival Czech Republic, as Samuel Solenksy’s shorthanded tally in the third was followed by Samuel Bucke’s game winner late. Lastly, the Americans took care of Switzerland thanks to timely saves from goalie Joseph Woll and a pair of goals from 2017 draft blue chipper Casey Mittelstadt in a 4-0 win. You can find box scores and lineups here.

Center/Right wing Oskar Steen (Ranked No. 86): Steen is a goal scorer who battles through having an average build to get himself into prime scoring areas. He’s a puck pursuer who gets involved every shift, and his elusiveness is a big reason why he managed to keep a regular shift with Farjestad’s senior club. He’s part of Sweden’s “Havoc Line”, flanking speedy pivot Linus Lidstrom (ranked No. 122) with pesky Jesper Bratt (ranked No. 91) on the left. Blessed with a hard shot and a quick release, Steen fired a game-high eight shots, one of which was a rebound goal off a point shot by stud 2017 prospect Tim Liljegren. An undervalued trait is his ability to deaden a bouncing puck whether moving or static. And he can play a little center too – he won both his faceoffs and covered up the defensive-zone slot on several occasions.

Center Lias Andersson (2017 eligible): An outstanding performance by one of Sweden’s top prospects for next year’s NHL draft in Chicago, Andersson centered the top line between left wing Alex Nylander (ranked No. 6) and right wing Elias Pettersson (2017 eligible). They combined to press a normally-reliable Russian defense corps, forcing turnovers which they quickly converted to scoring chances. Andersson is a horse along the boards, using either his lower or upper body strength to pin opponents. He opened the scoring in the first after a lengthy period of puck dominance in Russia’s end, taking the puck from the near corner and backhanding a shot home. He scored again during Sweden’s three-goal spurt in the second, curling towards the net from the near boards before snapping a bullet for a power play goal. He took a game-high 22 faceoffs, winning 15.

Goalie Joseph Woll (2016 Eligible): Woll is a Boston College recruit with the plum job of backstopping the international hockey equivalent of a freight train. He was impressive in last week’s 34-save performance against Sweden, and although he faced only 15 shots in Tuesday’s 4-0 shutout against Switzerland, the kid made the tough saves when the outcome was surprisingly (at one point) in doubt. The Swiss had a clear break-in right off the opening draw, and Woll remained square and low, slowly retreating back towards the goal line before stopping the backhand attempt and swatting away the rebound. He’s a classic butterfly netminder who looks like he’s giving away too much between the pads, but his reset quickness and net presence eventually fools the shooter into thinking there’s a chance. He didn’t have to work hard, but he paid attention and reacted properly.

Right wing Jesse Puljujarvi (Ranked No. 7): It seemed like everyone was hoping for last week’s Finnish league playoff series between Puljujarvi’s Karpat and Patrik Laine’s (ranked No. 3) Tappara to end in a four-game sweep —  all but guaranteeing one would be released in time to play at the U18’s. The series wound up going seven, with Laine advancing to the finals while Puljujarvi chose to cross the Atlantic and suit up once more for his country. The problem is that crossing said ocean takes quite a while, which is why we gave Puljujarvi a mulligan for his pedestrian performance in Tuesday’s 3-1 loss to Canada.

To be fair, we didn’t expect the kind of record-breaking output  we saw him unleash at the world juniors three months back– apples and oranges, we say. First off, he not only was rested, but also trained with the same linemates (Laine and Carolina Hurricanes prospect Sebastian Aho) for almost two weeks prior to execution. Not to mention the fact that he was playing on his home turf and didn’t have to travel far. There were no exhibition games or scrimmages to loosen him up prior to the match with Canada; no doormat to debut against. On Tuesday, Puljujarvi was fed to the proverbial wolves in the form of a Canadian juggernaut who enjoyed all the aforementioned luxuries while already boasting a pretty darn good lineup to begin with. Still, the power forward was able to create from either wing position, using quick, accurate passes to set teammates up for one-timers – one which required a highlight-reel glove save from Canadian goalie Evan Fitzpatrick (ranked No. 96). Puljujarvi may have looked as if he was skating through gravel, but that’s certainly the exception and not the rule. The Finns are better off with him in the lineup, which is a scary though considering how stacked they already were.