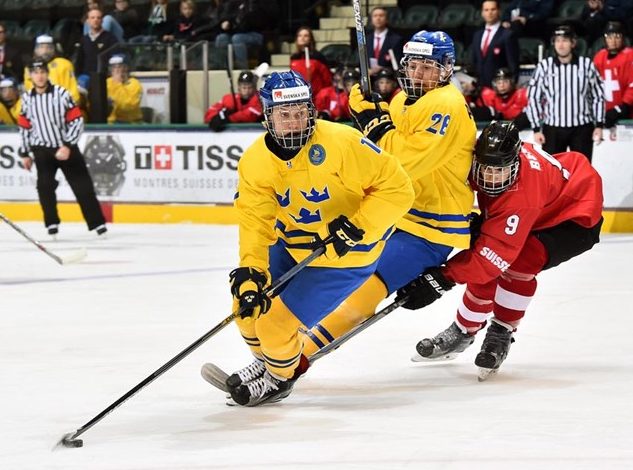 Grand Forks (The Draft Analyst) — The tournament continued up its expected trajectory, with the quarterfinal round now set following the relegation of Denmark and Latvia — two nations that went a combined 0-8. Sweden bounced back for a putrid effort against the Americans on Saturday with an 8-1 rout of Switzerland. Fueled by star wing Alexander Nylander’s six-point effort, the Swedes can clinch second place in Group A with a win over Russia on Tuesday. The Russians won their second straight after they blanked rival Latvia 8-0. Forwards Maxim Marushev and Mikhail Bitsadze each scored twice to pace the attack. The Czechs took their turn thumping Denmark, beating them 9-2. Center Ondrej Najman led the charge with a pair of goals and three assists. Lastly, the Canadians made it three for three with a solid 3-1 triumph over the Slovaks. Team Canada captain Tyson Jost had two assists to tie Nylander for the tournament scoring lead with eight points. You can find box scores and lineups here.

Center Tyson Jost (Ranked No. 14): Maybe it’s an archaic view, but we like it when a team’s captain just happens to be their best player. Jost epitomizes the lead-by-example trait, hustling in all three zones and using all six of his senses to ensure the Canadians can dictate the tempo of a given game. He was too much for the Slovkas to handle, which is important when you consider he’s been knocked for not being physical enough. When it comes to hockey’s special talents, you’d overlook it anyway. But he was engaged in scrums and took a hit (sometimes two and three) to complete a play. Jost’s put on quite a show on the ice he’ll grace as a freshman at North Dakota in the fall.

Defenseman David Quenneville (Ranked No. 134): Quenneville is easily one of the more undervalued defense prospects for the upcoming draft, but we can understand why his listed height (5’9) would scare some folks away. The only thing scary, however, is watching this powder keg launch into bigger forwards and paste them either into the boards or onto their backsides. He has abnormal upper-body strength, and he doesn’t need to pick up momentum in order to gain enough strength to knock a guy on his keister. The best part? He’s a brilliant offensive defenseman with a heavy shot and patient enough to wait for lanes to open before unloading. He was Medicine Hat’s go-to guy, and he quickly became one for Team Canada in a short period of time. He took a nifty backdoor feed from Tyson Jost and cut right towards the cage before tucking a backhander home. If his game was basketball, he’d be a point forward, and a reliable one at that.

Defenseman Mikhail Sergachev (Ranked No. 10): It seemed as though Sergachyov was handed the burden of carrying an underage group of blueliners following Team Russia’s pre-tournament meldonium debacle. But it’s he who has been a bit of an on-ice passenger through three games. He’s not logging a ton of ice time, and he was not used consistently as Russia’s top penalty-killing or power play pairing in a game where infractions were aplenty. Keeping things in perspective, we understand that it’s foolish to get worked up over this – he’s still an elite defender with sharp insticts and an absolute howitzer from the point. Sergachev’s defensive game is solid as well, as he blocked several shots and was able to pin and hold long enough for support to secure the puck.

Left wing Alexander Nylander (Ranked No. 6): Fitting that the Swedish sniper broke out of a mini slump with a six-point effort on the very day he was deservedly named the Onatario Hockey League’s Rookie of the Year. Nylander was quiet in the opener against the Latvians until a late tying goal, and was invisible in the blowout loss to the Americans on Saturday. He torched the Swiss, however, as they simply couldn’t contain him inside or out. He showed the quintissential Nyalnder patience by outwaiting Swiss goalie Matteo Ritz and whipping the puck upstairs for a goal in the first period , then pulled out the bag of tricks to posterize Kaj Suter and wire one home late in the 2nd.

Center Ondrej Najman (Ranked No. 145): Heady two-way pivot who turned out a tremendous performance, scoring twice and adding three assists. Flanked by power wing Matyas Kantner (Flint, OHL) and 2017 draft eligible lightning bug Pavel Kousal, Najman used his size and strength on the forecheck to create a turnover, then escape with the loose puck en route to the right circle, where he blistered a shot high on the glove side. He’s a smart and responsible player, and his decision to dart right to the back of the net in anticipation of a feed down low early in the third period proved correct — Najman beat both defenders to the puck and centered into the slot before anyone could react. Kantner took it and slammed it home, and just like that it was 4-1 in favor of the Czechs. He was Johnny-on-the-spot once more, this time midway through the third when he crashed the net and potted a rebound through a maze of players in the crease area. Through three games, Najman’s become the Czech Republic’s de facto first-line center.