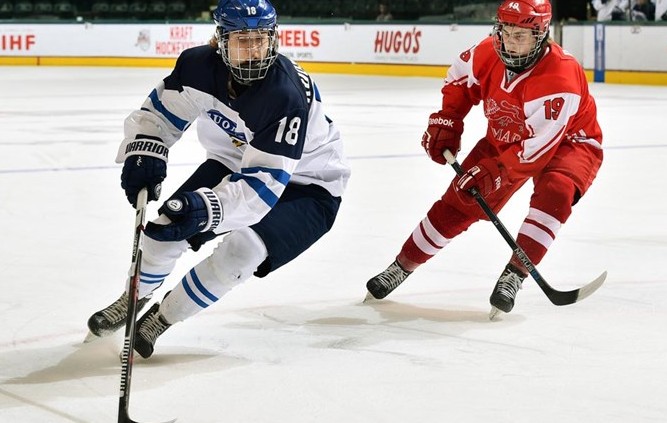 Grand Forks (The Draft Analyst) — Team USA continued its assault on international squads with their third straight blowout win – this time a 12-1 annihilation of Latvia. Center Clayton Keller (a goal and two assists) was one of five players with three or more points, with center Trent Frederic leading the way with a hat trick and an assist. Keller’s three-point night vaulted him past current NHL stars Patrik Kane and Phil Kessel to become the national program’s all-time leading scorer with 182 points. The Americans improved to 3-0, outscoring their opponents by a staggering 26-4 margin since the tournament began late last week. Finland also remained perfect thanks to a 4-1 win over Denmark. Right wing Eeli Tolvanen scored twice, right wing Janne Kuokkanen scored for the third straight game, and center Aapeli Rasanen added two assists as the Finns dominated the winless Danes, outshooting their Nordic neighbors 46-10. You can find box scores and lineups here.

Center Trent Frederic (Ranked No. 83): Frederic is an outstanding two-way center who was somewhat “demoted” to the third line following the addition of pivot Logan Brown. He entered the game against Latvia with only one assist to show for two blowout games worth of work, but he did his job in the defensive zone nonetheless. He hammered home a shot from the right circle for his first goal, then added separate markers on the power play and while shorthanded to complete the hat trick. Big, strong and skilled, Frederic may not be able to crack the draft’s top-30, but he could be added to the list of NTDP’ers (J.T. Miller, Jack Roslovic) who used the U18’s to vault up the draft charts.

Right wing Will Lockwood (Ranked No. 108): It’s always good to see the worker bees get rewarded with ice time, and what better situation to put in a speedster like Lockwood than a laugher against a doormat? The Michigan-bound winger plays feisty and maneuvers at a high rate of speed, and he looked quite comfortable on the power play, making smart choices with his entries. He fits into the “underappreciated” category of top NCAA recruits, but the Wolverines shouldn’t take long to realize his skill, when combined with a laudable work ethic, makes Lockwood a viable top-six option, even as a freshman. He finished with a season-high three assists.

Left wing Zach Walker (2016 Eligible): Walker is a Boston College-bound depth player who loves to play physical and use his upper-body strength to lean on opponents. He’s a big kid (6’0/200) who can play either wing position, and at one point we started to feel bad for the Latvians because they didn’t have an answer for his assertiveness. He toes that fine line between undisciplined and momentum-changing, but he chipped in with a flukey goal and an assist. His physicality will come into play if/when the Americans play against Canada or Finland.

Center Otto Makinen (Ranked No. 57): A talented playmaking pivot with excellent vision and shiftiness, Makinen has dominated a few tournaments, but he’s clearly taking a team-first approach in this one. His chemistry with wingers Janne Kuokkanen and Emil Oksanen (2017 eligible) is solid, and they orchestrate lengthy cycles which clearly wore down the Danes. He made a beautiful set-up for Kuokannen to open the scoring, pressing off a dump in and finishing his check before looting the second puck carrier for a backhand feed into the hash marks. He’s not lightning quick, but he’s got enough of a stride to cover ground and close on a defender before launching into him.