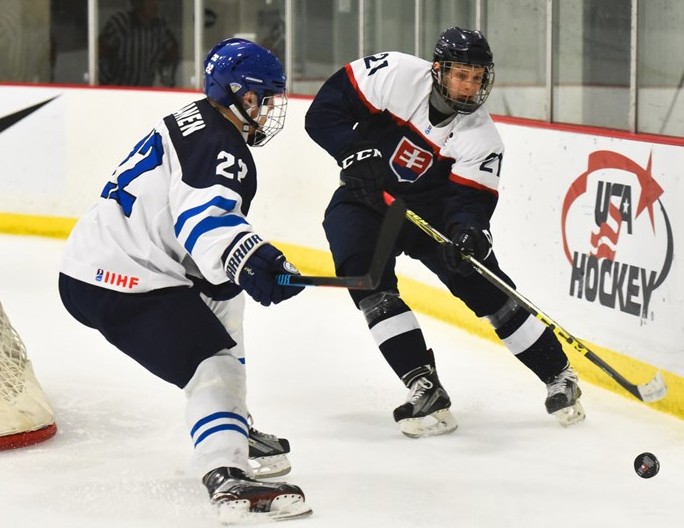 Grand Forks (The Draft Analyst) — The standings became clearer after three days, with no real surprises from the tournament heavyweights. Although the Russians came to Grand Forks at somewhat of a disadvantage (albeit, self inflicted), they scored their first win thanks to an overtime goal by left wing Pavel Dyomin for a 2-1 win over Switzerland. The Americans showcased their scoring depth, using six different goal scorers to drub Sweden 6-1. Finland used a relentless forecheck to pressure the Slovaks in a 4-2 triumph, and Canada held off a determined Czech squad after jumping out to an early lead in its 3-1 victory. You can find box scores and lineups here.

Left Wing Kieffer Bellows (Ranked No. 15): A tank on skates who toyed with the Swedes from start to finish, Bellows is as consistent as they come. All the things we noticed about him during previous viewings — size, strength, shot and spirit — were ubiquitous in his second match of the competition. He made his breakaway goal early in the second period look effortless, taking a nifty pass from defenseman Adam Fox before skating in alone and wiring a laser up and over the glove side for a 2-0 lead. Bellows is a nasty competitor who will use his stick to keep you honest, but he’s just as capable at using it to control the puck as if it were on a string.

Right Wing Graham McPhee (Ranked No. 169): McPhee, the son of former Washington Capitals general manager George McPhee, played a complete game against the Swedes. He’s bounced around from line to line the entire season, so his unimpressive stat line (14 points in 53 games) is somewhat understandable when you consider the type of elite program he plays for. He’s a big kid who plays with intensity, but he combined agility and smarts in yesterday’s win. The Boston College-bound McPhee made a dandy of a play in the second period, taking the pass on his forehand and gliding towards the near corner before firing a bullet through a maze of sticks and onto defenseman Ryan Lindgren’s tape for a tap-in. He may never blossom into a goal scoring winger, but he’s fast, strong and smart enough to make a mark at any level.

Left wing Casey Mittelstadt (2017 eligible): Mittelstadt contunues to impress, scoring his first goal of the tournament with a hard wrist shot to open the scoring late in the first. He was one of Team USA’s top players at the 2015 Hlinka, and you can clearly see he is playing with a ton of confidence. Mittelstadt’s an excellent stickhandler in traffic, and his impressive upper-body strength allows him to rip a heavy shot with accuracy. The more you watch him play, the less he seems like a kid recently removed from his senior year of high school. Mittelstadt, who plays in the USHL, is a prime example of a player who thinks before he acts, and the Minnesota Golden Gophers are getting a real prized recruit.

Defenseman J.D. Greenway (Ranked No. 93): Greenway is a project defenseman with a ton of potential, but he’s always pegged us as one who is extremely raw. He’s got the tools to make either smart, effective plays, or plays that will bring you out of your seat, with the former more prevalent than the latter. Still, we got a glimpse of his mobility and touch with a gorgeous shorthanded goal late in the second period. Greenway used his long stride and reach to cover ground in a hurry, then lugged the puck wide on his forehand to tuck in a backhander at the far post. This instance — as impressive as it may be — is few and far between, however, so his upside remains that of a reliable depth defenseman with very good mobility.

Left wing Kristian Vesalainen (2017 eligible): A power forward blossoming into a top-10 threat for the 2017 draft, Vasalainen displayed dominance against the Slovaks, finishing with a goal and two assists and displaying elite talents. He’s an excellent skater, and excels in all aspects of puck control. He made a notable entry on a goal by Janne Kuokkanen, taking the puck in traffic and weaving around several opponents before firing a bullet pass for a deflection. He scored a goal of his own a period earlier, receiving a gorgeous backhand lead pass from center Aapeli Rasanen for a breakaway and beating goalie Roman Durny with a snap shot over his glove. It’s scary to think that the kid won’t turn 17 until June, yet has already played 19 games for Frolunda’s senior team in Sweden.

Right wing Janne Kuokkanen (Ranked No. 51): Kuokkanen is quietly having a strong tournament, using his two-way smarts, quickness and awareness to consistently make plays in all three zones. He’s somewhat lanky, yet the brutes on Slovakia’s back didn’t always win their one-on-one battles with him. Kuokkanen is an excellent stickhandler who likes to hold on to the puck until the last possible second, and there are times when he will settle down a seemingly untenable situation. He scored a big insurance goal in the third period, combining with the aforementioned Vesalainen for a tap in on the doorstep.

Right wing Joona Koppanen (Ranked No. 119): While other Finnish skill players get the plum job of top-six minutes in a best-on-best tournament, Koppanen does yeoman work as a depth center, but does so with tremendous attention to detail and effort. He’s a tremendous penalty killer who takes good routes and occupies the right areas, and he’s won 15 of 20 draws since the tournament began. Koppanen excelled in previous tournaments when the Finns didn’t have as much scoring depth as they’re displaying in Grand Forks, so keep that in mind before thinking his ceiling is low.

Goaltender Evan Fitzpatrick (Ranked No. 96): Goalies have a tendency of using the U18’s as a springboard up the draft board, but Fitzpatrick was a stud way before Grand Forks. A big-bodied butterfly netminder with impeccable net presence, Fitzpatrick is the biggest reason Canada escaped with a win against the Czechs, stopping 38 of 39 shots as his teammates struggled to tilt the ice in his favor. His performance was far from Herculean — most of the Czech shots were from far distances and/or bad angles. But his rebound control was excellent, and never once did we see him fail to cover his angles as he moved side to side. He made a nice left pad stop on a breakaway in the second period, but lost sight of the puck for a second, requiring defenseman Logan Stanley to slide and block the rebound attempt at the yawning cage.