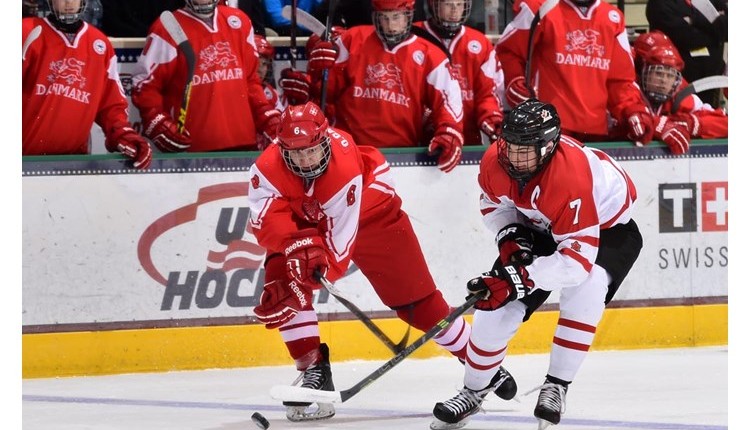 Grand Forks (The Draft Analyst) — Sweden’s youthful exuberance proved successful against the apprehensive Latvians, who needed the strength of goalie Mareks Mitens to come within seconds of a colossal preliminary-round upset. But left wing Alex Nylander one-timed the game tying goal with 19 seconds remaining in regulation, and defenseman Jacob Moverare went short-side high from a bad angle for a 4-3 win with just seconds left in the extra session. Canada, which won the bronze a year ago, struggled with Denmark through 20 minutes before exploding for eight unanswered goals immediately following a lengthy blackout in between the first and second periods. Captain Tyson Jost had two goals and three assists, while right wing Jordan Kyrou scored four goals as Canada cruised to a 10-2 romp. You can find box scores and lineups here.

Defenseman Jakob Chychrun (Ranked No. 2): It’s been a while since Chychrun represented Canada in a marquee tournament, and the U18’s proximity to both draft day and the North American scouting community adds to the pressure of playing in a best-on-best. No disrespect to his parent Sarnia Sting, but we’ve been waiting for the free-wheeling nature of international hockey to bring Chychrun’s elite skill set to the forefront, and boy did he deliver. He had an assist – a beauty of a pass for a high-slot redirect during a power play (an assist the IIHF failed to register) and six shots. But the key for a two-way defenseman like Chychrun is knowing when to create, when to attack and when to acquiesce, and he was on point with all three. He’s a wonderful skater, and took the puck with authority from his own end into enemy territory on a handful of occasions. He missed the net on a couple of chances, but his overall game was relatively flawless, albeit against a vastly inferior Danish squad..

Defenseman Logan Stanley (Ranked No. 60): Canada’s edict to its players was evident from the onset – everyone shoot the puck. Stanley has a cannon, and his bomb in the first period (one of his six shots for the game) was tipped home to open the scoring. We’ve knocked his reads and man coverage before, but he’s always had good instincts once the puck is worked around in the cycle. We get the upside – it’s significant, and he showed flashes of top-pairing potential during the regular season. He gave the Danes a lot of trouble, and his size and reach interdicted anything thrown his way.

Defenseman Dante Fabbro (Ranked No. 21): It was good to see a stud prospect like Fabbro reunited with his elite-level Hlinka teammates, and the improvements he made in both shot selection and shot accuracy were on display against Denmark. He’s always been a hard, accurate passer, and he worked the puck around with authority throughout the evening. Quick and decisive, Fabbro had three assists and five shots, and even clanged one off the post, showing no signs that his BCHL-trained offense won’t be translatable at higher levels. All things considered, however, his defensive play was inconsistent. He’s simply not physical, and on one occasion misplayed a zone entry, displaying matador defense in allowing the puck carrier along the far wall to blow past him for a partial break.

Left wing Beck Malenstyn (2016 eligible): If this Calgary Hitmen grinder played the WHL regular season the way he’s looked internationally, he’d be a lock for the draft’s first round. He’s a physical force and emotional leader, using a strong frame to out-muscle opponents. Malenstyn made a heady play on Canada’s second goal, driving the net and batting in his own rebound. He has leadership qualities and hustles to no end, and if he keeps it up, evaluators may be willing to overlook his lack of production with Calgary.

Right wing Jordan Kyrou (Ranked No. 81): Kyrou scored four goals – three from near the goal and one on a blistering wrist shot from the high slot – and had an overall strong game. He’s known as a pass-first winger, but the Danes presented him with plenty of open ice to use his speed and gave him all the room he needed around the goal mouth. Kyrou clicked with center Tyson Jost, who finished with two goals and three assists. Kyrou kept dropping in our rankings because, quite frankly, he’s a turnover machine. Team Canada’s structure, however, suits him well, and it was the best game he’s played in months.

Left wing Alexander Nylander (Ranked No. 6): Great players don’t have to be great all the time, which may or may not have been Nylander’s approach towards the Latvia game. He was on the perimeter most of the match, looking disinterested and treating the game like a scrimmage — which is what it was until Latvia rallied to take a 3-2 lead deep into the third. Still, there was Nylander and his elite release, waiting unchecked in the left circle with seconds to go in regulation. He didn’t have many options, but with 19 seconds remaining on the clock and his squad trailing by a goal, the Swedish sniper blasted a bouncing puck upstairs for the tying goal. He’ll face a huge test in his next match against the Americans, but you know what they say about great players…

Defenseman Jacob Moverare (Ranked No. 56): Sweden’s lacked an explosive and creative blueliner for quite a few year-groups, but Moverare is the closest it had to offer against the lowly Latvians. He’s a hard passer with good mobility and enough upstairs to know when to speed it up or slow it down. I wouldn’t call his hockey sense excellent, but it’s good enough to work with for a kid with top-four upside. He’s been known to display flash and dazzle on his way up ice, but his game winner in overtime was a simple, heady play in which he attacked a huge Latvian gap, then took the puck to the outside before rifling a puck into the tiniest of openings under the crossbar. We’re sold that it is he who is the better prospect than fellow rearguard and HV71 teammate Jacob Cederholm, but we want to see more of the flashy Moverare as the tournament progresses .

IIHF U18 World Championship: Day One