NASHVILLE (The Draft Analyst) — The United States Hockey League has always been known as the NHL’s go-to prospect source for teams interested in longer development timelines from their draft picks. So it shouldn’t be surprising that the combination of a salary-cap crunch and millions in lost revenue has increased the NHL’s scouting community’s desire for college-bound players. Once viewed as a step below Canadian major junior, the USHL has had greater representation in each of the last two NHL drafts than any of their three Canadian Hockey League counterparts, and that trend shouldn’t change in 2021.

Although many comparable junior leagues struggled to start or continue their 2020-21 seasons, most USHL teams have played at least 50 games, with eight clubs currently gearing up for postseason play. For some Canadian players, the league has also served as a haven, thereby allowing them to play and continue their development in the wake of government-mandated shutdowns north of the border.

As such, the current NHL draft class is once again loaded with USHL talent, and it is anticipated that at least four of their prospects will be selected within the top 32 of the 2021 draft. Although top-10 lists such as this one can be misleading in terms of painting an accurate portrait of any league’s depth of talent, most of those listed, including at least a dozen others, should be considered favorites to go within the first three rounds. 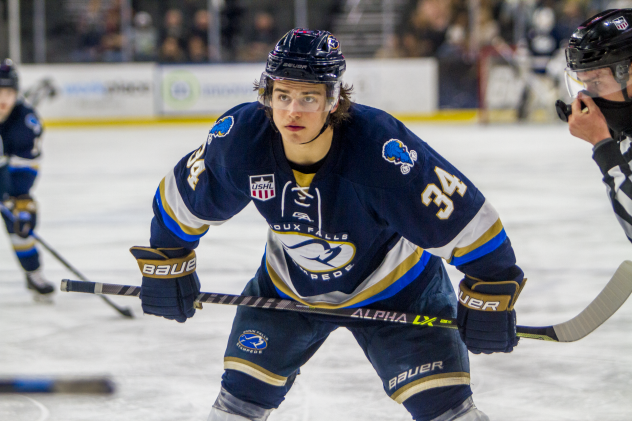 One of the best pure goal-scorers of this draft class, Sillinger is a former WHL prospect who left the Medicine Hat Tigers to play for Sioux Falls following a delayed start to the season. He boasts dynamic scoring ability and top-notch puck handling to make him a consistently impactful player on offense. Possessing an excellent shot, Sillinger leads Sioux Falls in scoring and his 24 goals rank ninth in the league and fifth among USHL first-year eligibles.

Sillinger’s strong hockey sense and great vision make him a dangerous playmaker as well, and his 1.48 points-per-game average ranks fourth overall. Sillinger’s skating can be viewed as average but he compensates for any mechanical deficiencies through his incredible deception. He is adept at anticipating, and creating time and space through his intelligence rather than rely on straight-line speed. 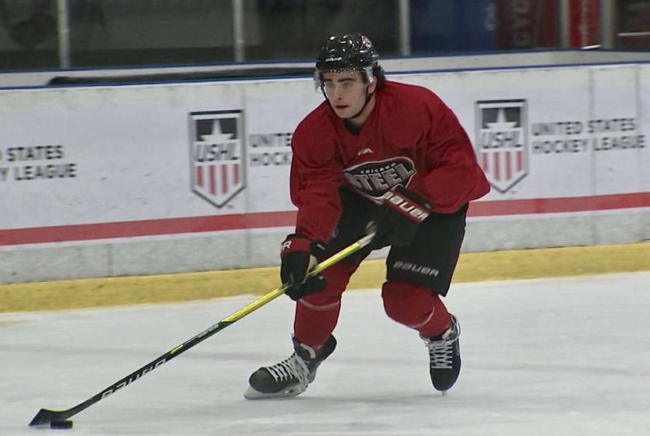 Coronato is a point-producing forward who possesses both high-end scoring and playmaking ability that make him a consistent threat in the offensive zone. He led the league with 48 goals and his 85 points led this talented group of USHL first-year eligibles. The Long Island native and Harvard recruit plays a fearless and aggressive brand of hockey that keeps him in attack mode every shift. Coronato’s long powerful stride allows him to gain speed through the neutral zone and burst towards the goal when given enough space, and this tactic proved quite effective this season.

In terms of skating, Coronato is more shifty and agile in an east-west manner than blowing past opponents in a straight line, and he relies more on his stickhandling to avoid neutral-zone congestion. where Coronato seems most comfortable is controlling the play along the wall inside the offensive zone before releasing into a soft area to unload his plus shot-release combo. Coronato demonstrates good vision and a high hockey IQ both with and without the puck. He can read a play and place himself in the best position to make an impact. His stocky frame allows him to protect the puck with his body and contribute physically. Although there is something left to be desired with his skating, Coronato remains a lethal producer and one of the top prospects in this draft class.

A highly skilled forward, Samoskevich brings an enjoyable and electrifying style every game. Although his numbers pale in comparison to Coronato’s, Samoskevich still ranked sixth among USHL draft-eligibles with a 1.03 points-per-game average. His strong vision, quick hands, and creativity make him an elite-level playmaker with Chicago; a team that was loaded with firepower at every position. A talented skater, Samoskevich’s agility and speed matched with pro-level stickhandling allowed him to create space from his defenders and execute highly-effective shots and passes.

For the Steel, Samoskevich has both the puck skills and smarts to play all three forward positions. However, he mainly played on the wing with Coronato as his center. Although he has shown creativity and flair while playing pivot, Samoskevich’s limitation off the puck likely translates to a full-time job playing the wing at both the collegiate and professional level. Although defensive flaws exist, his incredible playmaking talent makes him an intriguing option in the mid-to-late stages of the first round.

An offensively motivated winger, Martino possesses an elite combination of speed, skill, and hockey sense. He processes and plays the game with an offense-first mentality, consistently positioning himself to execute high-scoring chance opportunities for himself and his teammates. Martino is a creative playmaker, setting up teammates with solid and accurate passes that invariably lead the receiver towards the net. Also, he is a dynamic shooter that can beat a goalie through a variety of shots. Establishing himself as Omaha’s best player night-in and night-out, Martino ranked first on Omaha in points (56) and second in both goals (18) and assists (38).

Defensively, Martino uses his high hockey IQ to read plays and position himself in areas to disrupt an opponent’s possession. Even while defending, he maintains his offensive mindset, ready to explode through the neutral zone at the first sign of a change of possession. Although this leads to countless odd-man rush opportunities, it also causes Martino to be in a disadvantageous position if an opponent suddenly regains the puck. Though his aggressiveness sometimes gets the best of him, Martino has the tools necessary to become a consistent point producer in the NHL.

A two-way defenseman with excellent puck skills, Johnson is arguably the best USHL blueliner of this draft class. Possessing both a high IQ and great poise, Johnson succeeds at controlling play in both zones. He does a good job moving the puck up the ice with either stickwork or through accurate outlet passes. Offensively, Johnson processes the game at a quick pace and can make rapid decisions. His mobility and lateral quickness allow him to walk the blue line in order for a lane to open. Johnson may not be the flashiest player with the puck, but he succeeds by keeping this relatively simple. With 32 points in 47 games, Johnson ranked third among draft-eligible USHL blueliners.

Defensively, Johnson is the master of fixing opposing puck carriers. He is good at angling his body correctly and closing rapidly to shut down opposing opportunities in succession. Johnson does a great job creating turnovers and creating mishaps. He’s also opportunistic and can quickly turn opposing mistakes into quality counterattacks. With a solid foundation of skills at both ends of the ice, Johnson has all the makings of an effective and productive modern-day defenseman at higher levels.

An effective puck-mover for his size, Bar possesses an intriguing combination of size and skill that is expected to translate well to the professional ranks. Both defensively reliable and offensively active, he is a consistent contributor at both ends of the ice. Bar’s awareness, effective puck handling, and accurate passing allow him to exit the puck from his zone proficiently. He also enjoys joining an odd-man rush with the hopes of cashing in on a premier scoring opportunity.

Bar has some rawness to his game and should be considered a long-term project. Playing for a powerhouse has helped mask issues with decision-making and the mechanical aspects of his skating, and the run-and-gun environment can lead Bar into taking more high-risk chances. Bar occasionally gets caught taking these unnecessary risks that likely won’t not fly as the quality of his opponents stiffens. Still, Bar possesses a strong foundation of skill that should translate well to the NHL.

A solid all-around player, Broz impacts the game through his individual finishing ability and intelligent passing. He is a clever forward that processes the game quickly. He rarely wows viewers with a ton of flash but he executes plays and consistently contributing to his team’s offense. A notable distributor, Broz also demonstrates a knack for finding the back of the net. He can score off a variety of shots, including one-timer opportunities and wrist shots from a distance. Alhough he is most effective with mid-range chances, Broz also scores from in tight by redirecting point shots or stuffing in rebounds. Broz leads Fargo with 19 goals, 32 assists, and 51 points in 54 games.

A trustworthy forward on defense, Broz understands his responsibilities. He typically remains up high in the zone, closing in on players at the point and remaining in a suitable position to receive an outlet pass during possession changes. Fargo also entrusted him on the penalty-kill and Broz demonstrating effectiveness in almost all situations. His impact at the professional level, however, likely hinges on whether his offensive effectiveness can translate. He’s committed to the University of Minnesota.

One of the top point-producing draft-eligible defensemen in the USHL, Ufko is a top-notch puck handler with high-end mobility. His 39 points ranks second among USHL draft-eligible defensemen, and he also places second in both goals and assists. Ufko is an excellent play-driver and possesses the ability to elude opponents while carrying the puck through the neutral zone.. Ufko’s skillset makes him a valuable asset on the power play, as he serves as the primary power-play quarterback and averages over four minutes of ice time during the man advantage.

An intelligent player that processes the game well, Ufko is a solid defender who packs a punch but occasionally tries to accomplish too much on his own. His unnecessary risk-taking sometimes results in profitable opportunities for the opposition, but that could be a byproduct of playing for an up-tempo attack. He’s also on the smaller side for a defenseman, although that doesn’t stop him from delivering hard hits.

O’Brien joined Lincoln after playing for the WHL’s Portland Winterhawks a season ago, and the transition to a new league has proved challenging for a wiry center who posted 30 points in 55 games as a 16 year old. Thus far, O’Brien has managed just one goal and six assists in 23 games in his new surroundings, but he remains a strong skater with a solid hockey IQ who can play a simple yet effective game. His quick feet allow him to maneuver through all three zones with speed as well as close in on puck-carrying opponents.

A defensively-responsible forward, O’Brien demonstrates good positioning and awareness in the defensive zone. Though O’Brien is defensively sound, his offensive game needs refinement. Possessing no actual high-end skill, he seems better served in a support role rather than driving possession for his own line. You likely won’t find O’Brien on many highlight reels, but his solid defensive prowess and above-average skating ability help him maintain the potential to transform into an effective two-way forward.

Knies found his stride in late March after a pedestrian start to the season, as he has been scoring in bunches to finish his draft year on a hot streak. Knies, who recorded 10 goals and 15 points in the last 10 games, is an offensively-skilled forward with a knack for creativity and playmaking. His impressive vision and willingness to take risks combine for high-danger passing attempts that not only look good, but also create quality scoring chances. Additionally, he is equipped with a powerful and accurate shot, making him a dual threat offensively.

Although Knies’s creativity at times serves as his biggest strength, it occasionally becomes his greatest weakness. There are times when he tries to do too much or stretch his inventiveness too far, resulting in turnovers and lack of possession. Keeping it simple should be something Knies tries more often, and he will need to demonstrate an ability to simplify his approach to excel at the professional level.