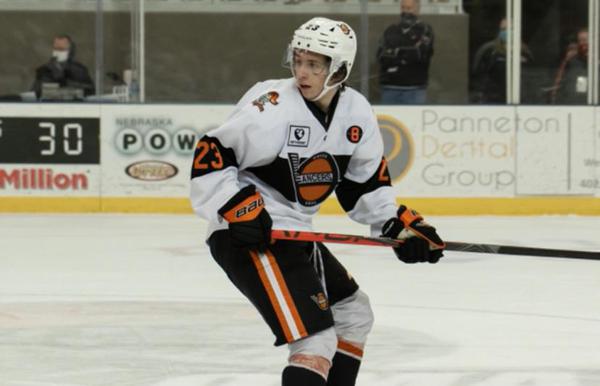 An intelligent and methodical left-winger, Martino experienced a rise in draft-stock playing on Omaha’s top line and being used in all situations. He came to the Lancers via the OJHL’s St. Michael’s Buzzers, whom he led in scoring during the 2019-20 season with 79 points (29 goals, 50 assists) in 48 games to rank third in the league. He was selected to play for Team Canada-East at the 2019 World Junior “A” Challenge, where he tied for team lead with five points (2 goals, 3 assists) in helping his squad come within an overtime goal of the goal medal.

This season, the Toronto native Martino leads the Lancers in scoring with 54 points (18 goals, 36 assists) in only 36 games, and his 1.50 points-per-game average ranked third in the entire USHL. He is committed to Clarkson University.

An explosive skater, Martino’s first few strides ease his ability to pull away or catch opposing players. His speed serves as a true difference-maker, creating fast-break opportunities out of unlikely scenarios. Martino maintains good balance on his skates, even when opponents attempt to disrupt his momentum. An agile skater, Martino also possesses excellent footwork and the ability to pivot both quickly and smoothly. Conversely, Martino’s stickhandling ability does not match up to his top-notch skating. Preferring to move at high speed and pace, Martino occasionally mishandles puck, diminishing quality scoring or leading to turnovers. These instances do not occur at a frequency that causes mass amounts of concern. However, getting Martino’s puckhandling at the same level of his skating will only increase his effectiveness at the next level.

An offensively imaginative forward, Martino possesses a high-level hockey IQ. He can read and react to plays, get himself into position before the play develops, and set up his teammate for quality scoring chances. With an elite scoring drive, Martino’s primary focus is attacking the net and producing a high-danger chance on goal, either off his stick or a teammate’s. Martino’s shot is both accurate and robust; this is most prevalent in his slot or mid-range opportunities.

A dynamic scorer, Martino is a constant breakaway threat who possesses multiple shot types, allowing him to adjust his attack on the fly. Along with his varying shot types, he also effectively scores in several ways. Martino is smart around the net, can fire off one-timers, and beat goaltenders on the fast break. He is most effective on the rush, where he can utilize his speed and creativity. For as good of a scorer Martino is, he is even better a setting up opportunities for his teammates. His passes are accurate, easily handled, and lead their intended target so they can remain in motion towards the net. On 2-on-1 opportunities, Martino knows to hold onto the puck long enough for a goal to commit to him as the shooter, then find a teammate for an open shot on goal. Martino is methodic and driven to be a multifaceted difference-maker in the offensive zone.

Always engaged defensively, Martino does a good job consistently putting himself in place to disrupt plays. He remains active away from the puck and can effectively read what the offense attempts to accomplish. At the same time, Martino maintains that offensively-aggressive mentality. When he determines the opposition’s attempt dead, he is quick to make his move up the ice, waiting for a break-out pass. However, if the opposition regains possession, Martino finds himself out of position and compromised. As he progresses to higher levels of the game, he will need to harness that aggressiveness and remain disciplined defensively.

Martino has an intense compete level and doesn’t take shifts off. It’s obvious he takes the game very seriously and doesn’t need three or four shifts into the game to get juiced up — he usually goes full throttle from his first shift to his last. Martino may not look physically intimidating or deliver crushing hits, but he relies on a nonstop motor to continuously battle and support his defensemen in the corners or pressure the heck out of the opposing point men. He’s easily one of the best penalty killers and short-handed threats in the USHL as well, so it’s no surprise the Lancers ranked second in the league with a kill rate of 84.3 percent.

A highly intelligent player, Martino processes the game at an elite level. His creativity and vision allow him to create quality scoring opportunities at a high frequency, making him a player others must account for at all times. Martino is a quick thinker who makes decisions based on an opponent’s coverage and can adjust to produce a better chance when driving toward the net. Always looking to create offense, Martino reads the game in a way that best suits accomplishing that goal.

Even when on defense, Martino anticipates the possession change and positions himself in the neutral zone, ready to receive the outlet pass. He is never stagnant with the puck and is always looking to make an impact. Although scoring a goal is always the objective, Martino is very skilled at determining whether the most high-danger opportunity will come from his stick or a teammate’s. He is always thinking and working through situations. This cerebral approach makes him a difficult player to prepare for and play against.