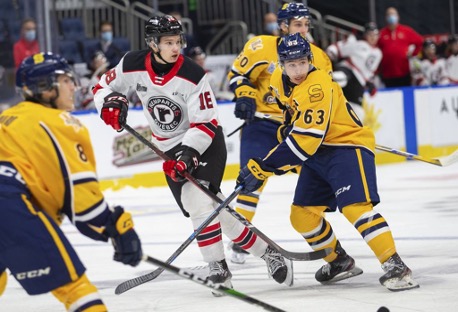 A sturdy dual-threat winger with an excellent shot and a low center of gravity, Marjala was selected 14th overall by Quebec in the 2021 CHL Import Draft after a successful season with Karpat U20 in Finland’s Nuorten SM-Liiga. His numbers last season in Finnish juniors (3 goals, 5 assists, in 20 games) may seem nondescript, but Marjala played for a powerhouse program loaded with both NHL prospects or blue-chippers earmarked for early rounds in upcoming drafts. Although the club was defense-centric and required their attackers to play within a tight system, Marjala was able to distinguish himself in spurts (specifically on the power play) as he split the 2019-20 season between Karpat’s under-18 and under-20 programs. He also represented Finland at multiple U17 events and was one of the leading scorers.

With Quebec, Marjala has been more of a set-up type than finisher, posting an impressive 27 points (5 goals, 22 assists) in 30 games to lead all QMJHL rookies in power-play points (12), rank second in assists, and third in scoring. Quebec is one of the better teams in the league this year, so Marjala’s 45 shots should be analyzed within the context of him playing within a deep attack. He has seen time on either of the top two lines and is used on the top power-play unit.

Marjala is a solid skater with strong balance but does not possess blazing or breakaway speed. His skating is effective in tight areas; below the dots in the offensive zone and moving from point to high slot in the defensive zone. He moves well on the power play, almost rover-like at times. Marjala’s stickhandling is not often displayed, as he opts for an effective quick-passing game rather than overhandle the puck or attempt a flashy plays that make the highlight reel. If need be, he displays quick hands in tight areas to gain an angle for a shot or pass.

As mentioned, Marjala does not shoot much with Quebec as he did with Karpa but he has a strong, accurate shot. He obviously shines in the playmaking department and consistently plays with his head up, using deception, vision, and keen anticipation to create opportunities for either his forwards or defensemen . Marjala has the knack for being a shooting or passing threat without tipping his hand, and he likes to attempt shots from closer to the goal rather than waste one from the low-danger areas. Marjala is crafty near the goal and from in tight, but he’ll freeze both the goalie and defensemen for a split-second, thereby creating a cross ice seam for a one-timer. Still, his overall playmaking is somewhat understated, but effective nonetheless.

Marjala is reliable defensively. He is aware of everyone’s positioning and seems to understand responsibilities as a scoring winger. He competes hard for pucks and positioning, and although he is listed at 178 pounds, Marjala appears to play much bigger. He uses his body well in establishing position and warding off opponents while possessing the puck, and Marjala’s acute understanding of game situations usually places him in sound defensive position. Sometimes the viewer can be duped into thinking a player is not competing hard enough because he is not hitting everything in site, but Marjala doesn’t need to smash opponents to wrestle away possession, as he is one to win puck battles and prevent scoring chances.

Overall, Marjala plays the kind of winning hockey that coaches desire from their player regardless of role or skill set.  The sum of his skills adds up to a smart, unselfish, team-first player, who seamlessly fits in any scheme. His stealth-like presence pounces on unaware opponents leading to offensive opportunities.

A cerebral player, Marjala thinks and executes simultaneously. He is consistent in his decision making, which usually produces smart, safe, outcomes that are a staple of his makeup. In the defensive zone, Marjala’s his head is on a swivel and his stick is actively alternating between passing lanes. Marjala thinks the game a few plays ahead, allowing him to make decisions that put his teammates in advantageous position. He has nuances to his game that do not translate to a stat sheet category, which won’t be noticed by the casual observer unless they rewind the film to identify Marjala’s subtle, effective decisions that either initiate or facilitate successful possession sequences.