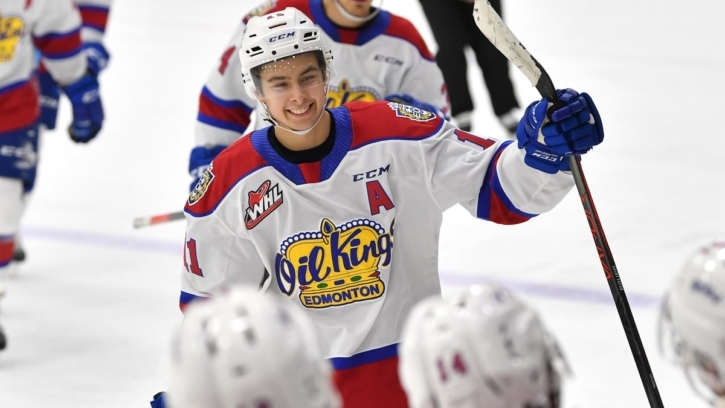 A top-line right wing who poses a scoring threat in any situation, Guenther wasted little time establishing himself as the WHL’s most dangerous forward this season, scoring 24 points (12 goals, 12 assists) in only 12 games before he was summoned for Team Canada’s under-18 camp. Although he (like most CHL’ers) waited patiently for his league to resume play, Guenther gave the Alberta Junior Hockey League a chance by suiting up with the Sherwood Park Crusaders for only a handful of games before prepping for a return to his Edmonton Oil Kings, where he has combined with linemates Jake Neighbours and Kade Oliver to form one of the league’s most prolific trios. This also was the case in 2019-20, when Guenther — the first overall pick int he 2018 WHL Bantam Draft — finished second to Michal Teply in WHL rookie scoring (26 goals, 33 assists in 58 games).

Guenther doesn’t seem like an explosive skater at first or second glance, but he can drop a lightning-quick first step in any direction, and his rapid peel-backs consistently catch opponents off guard. One thing of note is that he has added nearly 20 pounds from last season without a decrease in agility or acceleration, and he remains difficult to contain in the neutral zone. Whether Guenther’s frequent positioning in unchecked danger areas is a tribute to either his anticipation or speed (or both), the fact remains that the kid always seems one, two, or even three steps ahead of his closest opponent. He’s in open ice a ton and displays smoothness and fluidity no matter the game speed he’s operating at.

Blessed with soft hands and sharp hand-eye coordination, Guenther can make short work of defenders in one-on-one scenarios. Filling out has helped make his puck-protection skills even more impressive, as his constant shifting of body positioning with slight delays (while his head is up) can ankle-break an opponent to a good three or four feet off of him. Guenther makes a lot of money stickhadling in tight spaces and knows how to use both the boards and switching/weaving teammates to his advantage, and it’s quite common to see him turn your basic two-on-two into a coverage mix-up that results in an open lane to the net.

Guenther is your classic dual-threat who can differentiate between when it’s time to play sniper and when to go the pass-first route. If there was a “best option available” category for scoring chances created, you’d probably find Guenther at or near the top of that list. In other words, he rarely settles for low-percentage plays and will reload a possession if necessary by staying in motion and alternating sides. But Guenther has a plus-plus shot-release combo and he sure loves to use it, and you can say his “office” for a right wing is anywhere inside the left circle, especially on the power play. His shots per game in 2020-21 (4.25) took a massive jump in comparison to last season (2.87), albeit in a smaller sample size, but there’s no reason to think he wouldn’t have hit at least 50 or 60 goals and 250 shots had the WHL played a full season. As nasty as his wrister and one-timer are, however, Guenther probably is the best among his peers at depositing net-mouth chances or cross-crease feeds.

Having elite goal-scoring prowess affords Guenther the time and space to showcase his vision and passing ability. He’s often the primary possessor during advances up the ice and will make smart timing plays to allow his entire unit to not only enter the zone but also have enough time to position themselves properly. Guenther on the power play is used as the “F4” who starts out high but eventually slips into the left or right circle, where he will deliver crisp, accurate passes across the seam from either forehand or backhand.

Guenther’s two-way game is a significant part of his overall skill set, but he has taken it to another level now that he has a thicker frame and is a year wiser. He is hyper-aggressive off the puck and will apply in-your-face pressure using an active stick, hard shoves, and rapid directional changes that allow him to harass either a mobile or static puck carrier. Guenther also is one of the more active penalty killers you’ll find within the 2003 age group, as he constantly pressures the points and finishes his checks along the half wall. His desire to make life difficult for an opponent is quite strong and it’s blatantly obvious why coaches at multiple levels of competition have used him for the penalty kill or during late/close situations. Another testament to his maturity is how he can show a nasty or gritty side while staying within the rule book — Guenther’s totaled only 24 penalty minutes in nearly 80 WHL games. Although Guenther’s zeal off the puck can lead to occasional overcommitments or lapses in coverage, any coach would gladly welcome his efforts and the mostly positive results that go along with them.

It goes without saying that a top-flight winger who possesses the aforementioned qualities in versatility and playmaking must think the game at a higher level, which is exactly what Guenther does on the regular. Whether opponents know his intentions or not is practically irrelevant because Guenther still manages to outfox them and beat them to a desired spot far more times than not. He makes so many smart plays in the neutral zone that result in immediate counterattacks, and what he does with the puck from that point forward is usually calculated and strategized. Some might call him opportunistic or taking advantage of what’s given to him, but a deeper analysis of Guenther’s game shows highly-intelligent play in all three zones. He is an effective player and contributor whether he’s scoring or not.

Growing the game: Hockey in the U.K.