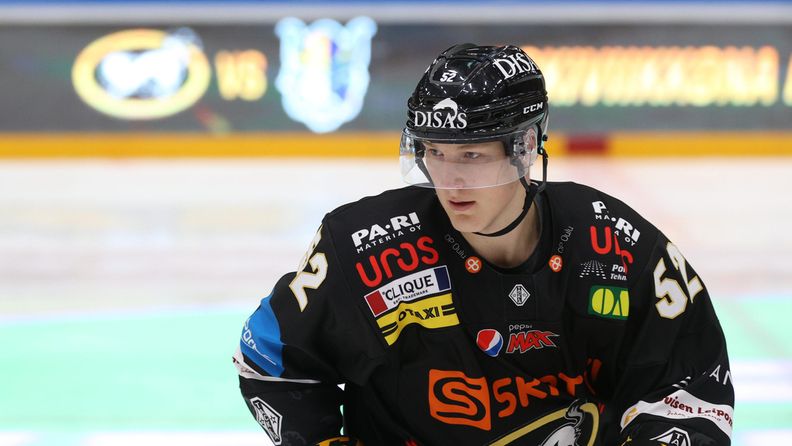 A notable prospect for several years prior to his draft season, Raty entered the 2020-21 campaign in an exclusive group of neophytes who were considered potential top picks in a relatively thin class. The younger brother of Arizona Coyotes’ prospect Aku Raty — a pure winger who has flanked him at both the club and international levels — Aatu at this point should no longer be considered a candidate for the No. 1 pick for several reasons. But his up-and-down draft year (that included a publicized snub from Finland’s world junior team) should be contextualized by his role on a perennial contender locked in a ultra-competitive playoff chase, where nine of the SM-Liiga’s 15 teams had a points percentage of .655 or higher, and only three points separated the third-place team from the seventh.

Therefore, an adult-age environment could help explain not only Raty’s 11:37 of ice time (which ranked 15th among 17 Karpat forwards), but also the fact that he was held off the scoresheet in 30 of his 35 games (and five more in the playoffs), including a 25-game goal drought to end the season. Raty’s lack of finish was concerning, especially since he was frequently used on the second power-play unit. But it probably was a systemic issue more than anything else, as Karpat’s 2.47 goals per game was among the league’s lowest in a traditionally goal-stingy circuit. So yes, the overall numbers — 3 goals and 3 assists in 35 games — can be deemed “unbecoming” of a potential top pick, but Raty still generated 80 shots in limited time for an above-average 11.8 shots per 60 minutes. For what it’s worth, Raty spent eight games with Karpat’s U20 team, recording seven points (3 goals, 3 assists) in eight early-season matches.

Raty’s overall skating package is above-average for a center his size and it can be critiqued as either inconsistent or improving. Two certainties are his hustle and nonstop activity both on and off the puck, therefore helping him look faster than he probably is. He’s definitely had some jersey-flapping moments in open ice where he outpaces back pressure, only to look robotic soon thereafter. Raty has a wide stance and stride and is a bit of a heel-kicker when moving north to south, but you can tell he’s working on his mechanics to limit any technical inefficiencies from his stride. In the end, the kid’s balance under pressure is excellent; he still gets to where he needs to go, wins a fair amount of foot races, and turns on a dime.

Raty became more of a shoot-first center this season; one who jammed the net-front area when he wasn’t weaving or cycling his way into a shot attempt. His play last season in the U20 SM-Sarja revealed how confident and reliable he is at controlling the puck under pressure and attacking open lanes using multiple direction changes in the process. He also assists his defenders with breakouts and can carry the puck cleanly through traffic before pulling up at the line and letting support catch up. Raty definitely knows how to use his frame to his advanatge and keeps the flash in his short-distance game to a minimum. He also is adept at delivering precision hand-offs and executing set plays off the cycle or draw.

Raty has an excellent shot and release that must be respected, but refinement is needed. There were games when he clearly established a desire to shoot pucks from anywhere on the ice but with varying degrees of accuracy and sensibility. Although some feel like hitting the net is good enough for a teenager in a men’s league, the reality is that Raty —  an inside player more than capable of creating his own shot from in between the hashes — tends hit the goalie’s crest or miss the net completely. He has the hands and agility to improve his angle and take it closer to the goal, but one of the bigger criticisms of Raty’s game has to be shot selection. On the positive side is his willingness to release from shooting areas and head straight to the net, where Raty will battle with defenders of any size for positioning.

Raty’s pass deliveries are mostly accurate and his touch can be fine, but he seems to have devolved from playmaking for his on-ice unit. Whether that impacts his development as either a center or wing is irrelevant at this point, but one should definitely classify Raty as a goal scorer before a set-up man. One area where Raty’s passing has a positive impact is on breakouts, where his first pass usually is hard and on the tape. Although his intentions are usually sound, Raty can be iffy with puck management by attempting passes that miss being intercepted by a hair. Fortunately, his completion percentage in these cases are high, but he needs to add more deception and delays to avoid being telegraphed by smarter checkers.

If Raty ever fails to live up to his scoring expectations, he should always find a role as an energy checker and physical presence. Nobody should ever question Raty’s efforts, as he is a tireless worker from start to finish both on or off the puck, and he is consistent in covering the low slot and supporting his defensemen below the goal line. Although he can be guilty of flying the zone, the timing of these decisions can be defined as opportunistic rather than selfish or passive. In terms of special teams and intangibles, Raty never killed penalties for Karpat’s A-Team and won 47 percent (142-for-302) of his draws, including 53 percent in the neutral zone.

Raty will stand up to physical challenges and even has an abrasive side that stays within the letter of the rule book. It’s common to see Raty mix it up in front of the net and give the occasional facewash after the whistle, but a lot of it seems to stem from a high battle-level during net-front confrontations that continue during stoppages. He isn’t as punishing a hitter as fellow 2021 draftee Samuel Helenius, but there is no reason to think Raty will have a hard time adapting to the physicality of the North American game. One should also expect Raty to have a sizable list of enemies early into his NHL career.

Decision making is the area where Raty needs to find consistency, but his intentions are easily defined and mostly justified — for example, he sees his open limemate in a scoring area before anyone else but also needs to be quick with his risk assessment. Assuming risk is a big part of Raty’s game either on or off the puck, but there are times when he has difficulty keeping his game simple with nothing more than strength and effort. Additionally, Raty likes to bunch up towards the strong side of the puck without exploiting a potential gap in coverage. This probably stems from his puck-hounding mentality, but he needs to trust his linemates more and support the puck behind or parallel to the direction of travel rather than right on top of it to create a numbers disadvantage elsewhere. What’s perplexing is that Raty also can be a shark in the neutral zone and make the right reads in his own end, and as already mentioned, anticipate puck travel to kickstart a counterattack.