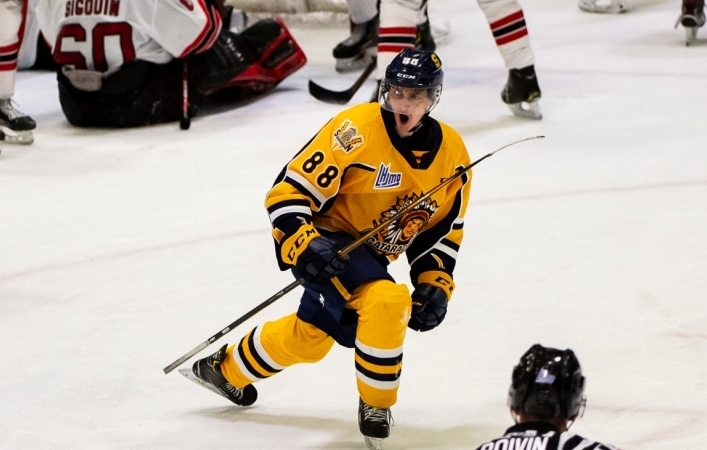 Bedard is one of several tireless, hard-working forwards on Shawinigan. He is quick to the puck, fast in open ice, and has impressive agility in the face of pressure or traffic. Bedard plays primarily on the second line with Carolina draftee Vasily Ponomaryov and is also used on the penalty kill. All of his 11 points have come at even strength and he rarely sees power-play time. Although listed at 150 pounds, Bedard — selected 23rd overall by Blainville-Boisbriand in the 2019 QMJHL draft — looks and plays bigger than his measurements may suggest,  and his point totals do not reflect his effective three-zone play. The trade to the younger Cataractes has provided a better opportunity for him than if he would have had with the veteran-heavy Armada. He seized the chance and opened eyes with his solid play.

Anthony possesses tremendous burst and a quick first step. This enables him to escape a forecheck, release from scrums, and jump into shooting and passing lanes. His speed is highly effective on the penalty kill, allowing him to quickly cover space and eliminate time for the opponent. It’s been said that having speed without a motor is useless, but Bedard has both and often is the first player on the forecheck, relentlessly dogging the opponent. Bedard handles the puck well but is more of a straight-line player who uses his speed to create advantages. Overall, Bedard’s puck control is above average yet he seems better suited in the give-and-go or dump-and-chase aspects of the game.

Bedard spends a chunk of his offensive-zone time in tight areas around the slot and also in puck battles, thus making it difficult to accurate assess his shot that he rarely uses from distances. With limited open ice chances, Bedard has shown the ability to create his own shot and release attempts quickly. He has a quick release and is good in getting pucks though traffic, but he rarely gets opportunities to let it rip — Bedard has a recorded two shots or less in 27 of 30 games this season. At times, Bedard can be creative and make plays for his linemates. Defenders need to honor his speed, and this enables him to hit teammates filling the seams. Sometimes he gets tunnel vision in that he focuses on driving ahead instead of allowing the play to develop.

Bedard understands game situations and usually makes the proper play. He rarely is caught making a mental error. If he gets himself into trouble, it’s usually because he plays the game at a feverish pace when situations call for deliberation and allowing the play to develop. Learning to use his speed will come as he gains more experience, but he is a fun player to watch nonetheless.

Bedard is sound defensively and heavily counted on for the penalty kill. His speed and quickness combined with smarts add up to him being a top-notch player while down a man. Bedard has a non-stop motor, never giving up on a play and willing to sacrifice his body. He wants the puck and does everything in his power to make life miserable for his opponent. Bedard’s willingness to use his body and get into those dirty areas adds value to his game.